A flashback documents Cryska’s beginnings in a Soviet research facility, where she first met Inia. Back in the present, Lt. Cui now wants to marry Yuuya, and promises they’ll go on honeymoon if Bao Feng beats the Infinities. Unfortunately for her, they are brushed aside with ease. Yuuya goes to town with Inia and Cryska, who wants answers regarding why they’re exhibiting what seems to be feelings for him. Yui stalks Yuuya as he gives the twins flowers and is confronted by Cui. At the local bar, Yuuya asks Yui to train him in kendo, but Leon interrupts, and a fight ensues that they both vow to finish in Blue Flag.

We’ve seen how test pilots are rewarded for risking their lives in new and untested equipment by being given a lot more perks and living more comfortable lives than front-line soldiers. Those benefits are out in full force this week, as for the duration of Blue Flag, if you’re not competing, the day is yours to do with as you please. That means walking around town, hanging out in parks and bars and generally relaxing and not doing much. We’ve always said this series is best when the shit hits the fan and the characters have their backs to the walls. This episode is decidedly not the series at its best.

Nearly every girl is interested in Yuuya, but go about it in different ways. We have Yui, perhaps the most plausible suitor, devolve into full Jealous Blushing Stalker Maiden Mode, and Cui Yifei in Horny Self-Proclaimed Wife Mode. Inia can’t explain why she likes Yuuya, but Cryska likes him too and he makes her happy with a bouquet – only she’s so underdeveloped in social graces, she doesn’t quite grasp what affection, love, or happiness even are. Then there’s apparently a past between Yuuya and Sharon Imes. But more interesting to us is what happened to make Leon hate Yuuya so much and vice versa. Unfortunately, the episode ended before it could get into that.

Yamato gives Mei a bracelet to match his as a public symbol of their love, and rumors spread about their going out, which reach the promiscuous Hayakawa Kakeru. He meets Yamato and Mei for lunch on Saturday, but Hayakawa suggests Mei go out with more guys, upsetting her, and she leaves. Yamato punches him. Back at school, Hayakawa whines to Aiko, but the conversation turns nasty. Mei overhears and has choice words for Hayakawa, who runs off in a snit. An off-guard Aiko calls her and Yamato a couple of idiots and also walks off. Mei meets Yamato in the courtyard, and when she asks him he admits he slept with Aiko. Mei kisses his bandaged hand.

Mei is in top form this week, amidst a barrage of caustic crap from the unpleasant  self-hating Hayakawa. She doesn’t let herself get fazed by that barrage, and wastes no time disposing of his number in her phone once she sees his true colors. He’s a tomcat and a cad, amassing a legion of FWBs but having no genuine happiness to show for it. He can’t have what she and Yamato have, can’t stand it, and so tries to destroy it. He fails spectacularly. He’s also a coward and a brute, lashing out at Aiko when she gives him her ear, and even grabbing/shoving Mei when she gives him a piece of her mind in Aiko’s defense (Mei’s brave “smacker” comment was pretty freakin’ boss.) Pushing girls around: NOT COOL. Not expecting thanks, Mei makes it clear to Aiko that if it’s a fight she wants, she won’t let her win. Aiko, who fired the first salvo last week, pretends it’s not a big deal…but we know better.

Then we have Yamato himself, the guy Aiko wants and Hayakawa wants to be. He first gets kudos for suggesting that things may get easier for Mei if she made more friends, which is easier to do when she’s with him. It’s a bit heavy-handed, sure, and maybe Yamato and Mei would be just dandy if everyone simply left them the hell alone, but this is high school and that’s not going to happen. Mei could use more allies. Yamato has some points deduced for agreeing to yet another date that’s not just the two of them, and for again leaving her alone with a wolf. Like last week, he comes out on top by promptly detecting Hayakawa’s knavery, slugging him, and making it clear Mei is his (a bit possessive, but his heart’s in the right place). One concern is the “Nagi” who calls him. By episode’s end he tells Mei the truth about him and Aiko. Here’s hoping he continues telling her the truth – it’s the best aphrodisiac. 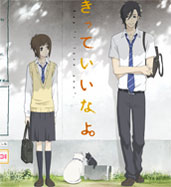