From the battles of Benimaru, Gobta, Gabiru, Geld, and the Beastketeers we rewind a bit back to Rimuru’s palace, where he sees Shuna off before heading through the ominous portal from which an extremely powerful demon maid named Misery emerges to escort him to Walpurgis. Before heading off, Veldora and Ramiris tell Rimuru the names of the other demon lords: the giant Dagruel, the vampire Roy Valentine (and his predecessor …Milis?), the demon Guy Crimson, and the lazy Dino. 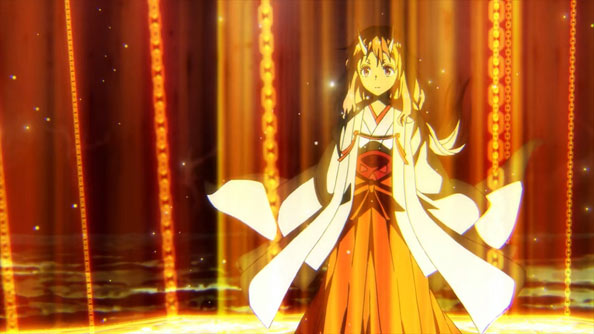 While Souei and Hakurou buy time by battling a zombie dragon and knight, respectively, Shuna uses an Alignment Field to cordon herself and Adalman off so they can have a nice little magic battle. It seems like it’s been ages since the good princess got something to do, but it was worth the wait, as she kicks some serious skeleton ass. 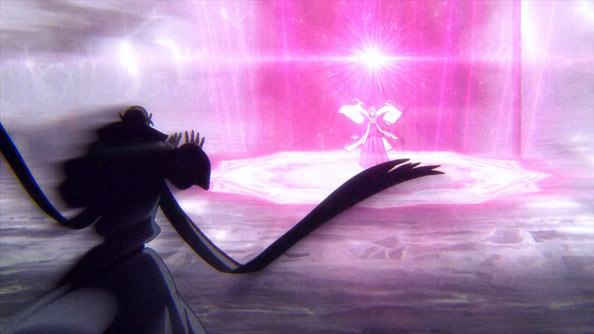 Mind you, Shuna doesn’t move around much, nor does she ever raise her voice. But that’s fine; the dignified, elegant princess isn’t one to scurry around or shout. She stands with absolute confidence in her power as she calmly counters his Acid Shell with her Flame Wall and his Curse Bind with her Holy Bell. That last one surprises Adalman, who didn’t know a monster could summon a Divine Miracle. 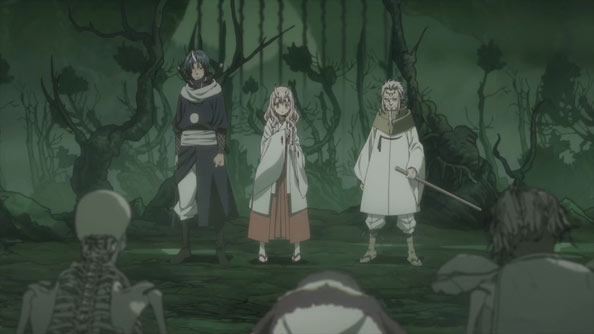 When she rewrites his suicidal Disintegration mega-spell with Overdrive and disperses most of the undead army, she also inadvertently lifts the binding curse Clayman cast Adalman and Co. in order to have their…er…undying loyalty. But now that he’s been soundly defeated by a revere-er of Great Rimuru, Adalman is all about meeting the Lord Slime, and happily offers to guide Shuna & Co. to Clayman’s castle. 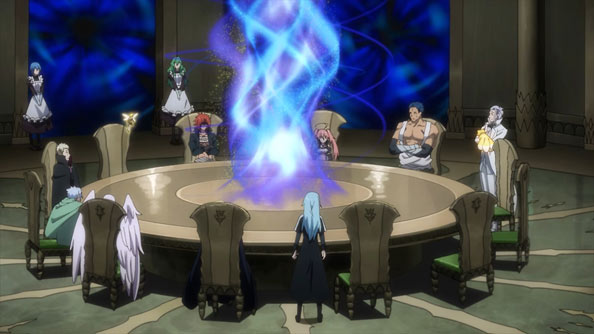 As for Great Rimuru, he encounters Guy Crimson (who definitely has his game face on), Dagruel, Guy Valentine, Milis (possibly), and Frey for the first time, and has some harsh words for Leon regarding what he did to Shizu that results in Leon inviting Rimuru to his castle…assuming the slime survives Walpurgis.

That’s when the other new kid on the block Clayman arrives, with a very out-of-it-looking Milim in tow. Rimuru surely could tell something was very wrong when Milim didn’t immediately run to him and gather him into a warm embrace—they are BFFs, after all. But what really sets Rimuru off is when Clayman, clearly drunk on power, strikes Milim in the head. Everyone is shocked by Clayman’s conduct, but Rimuru is just mad, and promises Clayman’s death won’t be painless. Can’t wait to see it! 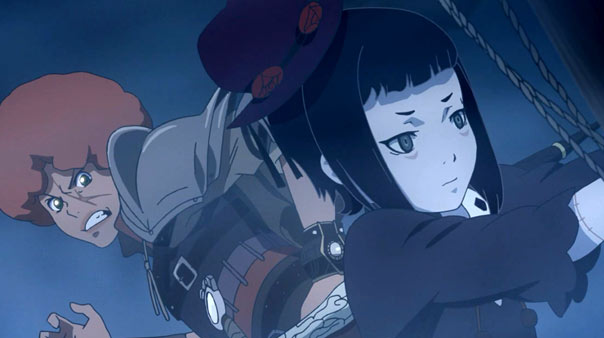 Bahamut delivers yet another exceedingly exciting, breathlessly swift-moving episode where no one is standing still long. Favaro teams up with Rita to infiltrate the enemy castle, then convinces Kaisar to put aside his vengence for the moment so they can rescue Amira. The plot is pretty straightforward, which works in its favor, because what makes the episode truly special (and immensely fun) is the execution and details of that plot, along with its ability to utilize — and reward us for — our emotional investment in the characters.

Last week Azazel snatched up Amira and Kaisar with the tentacles from his boss flying bio-castle, Gregor, and is enjoying a fine repast as Amira is tortured by Pazuzu. I loved the almost office-like atmosphere of the villans’ lair. Kaisar also has to watch, and when he brings up Favaro as the demon who tricked Amira into stealing the God Key, they all heartily guffaw. It’s great how as clearly evil as these guys are, Favaro is even worse than all of them in Kaisar’s mind. 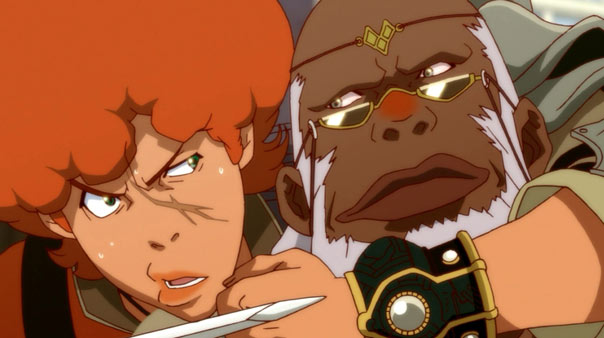 But, of course, that’s far too harsh, and being far too narrow-minded about who is responsible for who’s downfall and death. But harsh and quick-to-judgment is Kaisar’s M.O. in dealings with Favaro. Meanwhile, Favaro is able to convince Bacchus to lend him his flying carriage, but only if he pays the “fare”, which Bacchus leaves up to him. Favaro chooses to sacrifice his bounty hunter armband — practically his livelihood, up to this point — making him just another outlaw. That’s dedication, especially for a demon-girl who gave you a tail and your childhood friend who wants to kill you. 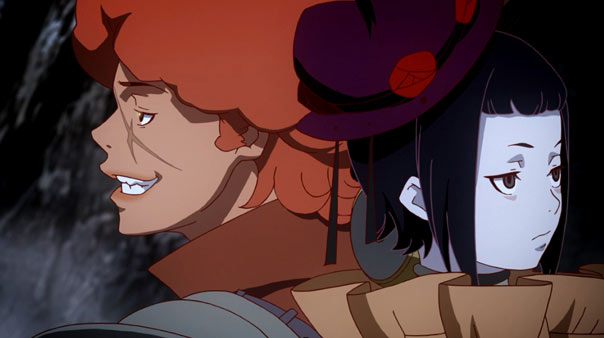 Rita and Favaro prove just as irresistable a duo as Kaisar…moreso, even. Unlike the upstanding-to-the-point-of-back-spasms Kaisar, Favaro and Rita remain stubbornly morally ambiguous (although one could argue that Kaisar’s vendetta and bloodlust are hardly morally pure virtues, even if he thinks he’s righteous). For half a ‘mo, Favaro considered the advantages of having Amira and Kaisar out of his hair, but sees that Rita is willing to spring into action, so he follows her lead. 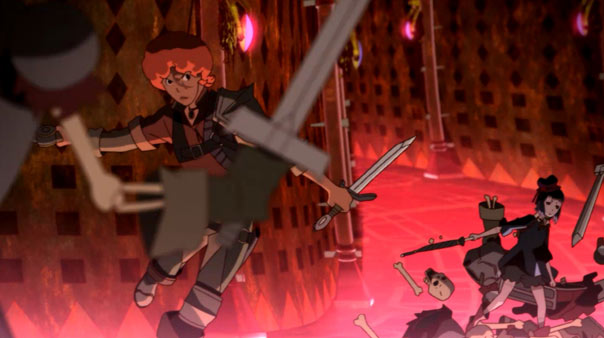 On more than one occasion, Rita wonders out loud why Favaro is going so far, as if to validate the fact she’s doing the same thing for Kaisar. And so they egg each other on to be the brave, and valiant heroes. And they proceed to kick some Gregor dungeon grunt ass on their way to where Amira is being held.

Kaisar, who is also there, was told all about what Amira is and what she did, but he ends up being used as a pawn by his captors, who egg him on into taking care of their intruder problem for them. And after all that traveling, Favaro is a half-step behind the rested and super-pissed Kaisar, who’s still convinced Favaro is guilty of putting Amira in danger too. Again, this is a perfectly reasonable position for someone with his level of loathing towards Favaro.

Rita ends up breaking up the fight by launching her separated arm at his face and calling him a “brat”; which is a pretty awesome way to break up a fight!

Having had some sense knocked into him, Kaisar agrees to table his quarrel with Favaro until Amira is safe and they’re all off Gregor — but only after Favaro makes a gesture that limits his options in a future he’s classically never planned for: he tells Kaisar when the time comes to face him, he won’t run. 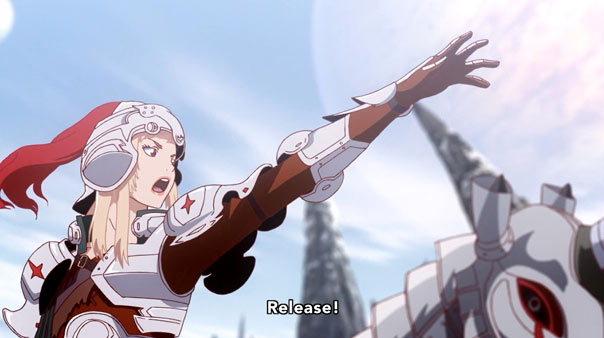 As all that’s going on aboard Gregor, we get a little surprise: Jeanne d’Arc! Here I thought we had been watching flashbacks of yore, but she’s actually been in the same present as Favaro & Co. all along. In a gloriously staged deus ex machina, she arrives just when the Gregor is about to pass through the gate to the Demon capital of Cochytus. In a particularly bad-ass tactic, her Orleans Knights close the gate while Gregor is only partially in, thus slicing that portion off and crippling it.

We get a good helping of how Orleans fight: with arrows and catapults and spears, all thrown and launched through magic circles that intensify their offensive effect. This time, the battle was in broad daylight, and thus easier to see!

Favaro and Kaisar work together to take out Pazuzu and use the handy chains and pulleys to lift themselves to safety. Azazel attempts to re-take Amira into custody, but is slapped back and forced to retreat when some form of demon guardian shields her.

All’s well that ends well, with Favaro, Kaisar, Amira, and Rita flying off into the sunset aboard a zombified dragon, presumably to continue their odyssey to Helheim. But a lot of uncertainty lies on that horizon. Azazel & Co. will be back on their tail before long, as will the Orleans Knights. Favaro has cast aside his career and agreed to face of with Kaisar, and still has a tail. Rita could zombify or eat the others at any time! (though that’s unlikely). And the angels are having a heckuva time keeping an awakening Bahamut at bay, which is an existential threat to the entire world.

But so soon after surviving the day by the skin of their teeth, I’m sure the crew isn’t particularly concerned about what may come tomorrow. Instead, they’re probably content to enjoy that sunset and that smooth ride of that Zombie Dragon, which I’m sure is the name of a band.