I was doing a little research, and learned that October is (or as of tomorrow, was) far more than just Breast Cancer Awareness Month. Believe it or not, it’s also Spinach Lovers Month, which is a perfect segue to the next character trait we’ve compiled our latest list for: Green hair.

Poring through the cast lists of Fall 2014 shows (only shows we’re reviewing here are RABUJOI, mind you, in case you see a glaring omission or two), we learned that green (or green-blue) hair in its various shades is a bit rarer than pink hair among anime casts, and one show accounts for most of the characters on this list. 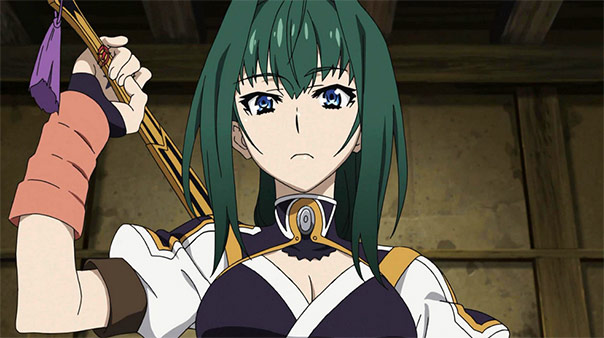 Perhaps the most prominent character on this list, Akari is from the mountain village of Acura, born and raised like her brother Tooru to be a saboteur, her world’s equivalent of a ninja (or kunoichi, in her case), and now serving beside him as Chaika’s bodyguards. Her preferred weapon is a long, thin hammer. Like Tooru, she possesses “Iron Blood Transformation”, which makes her stronger and faster with few if any drawbacks. She also has a brother complex, but unlike typical brocons, expresses her love for Tooru the exact same serious deadpan in which she mocks or criticizes him. 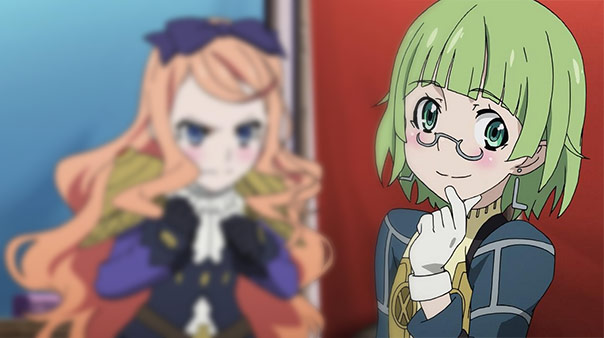 Zita is wizard and a member of Post-war Reconstruction Implementation Agency, Kleeman under the Gillette Corps, presently led by Nikolai Avtotor. She also drives “April”, the Gillette Corps’ vehicle. She’s lot less hot-headed than her colleague Vivi, and forms a temporary alliance with Acura Tooru while stuck in Duke Gavarni’s flying castle in the first season. 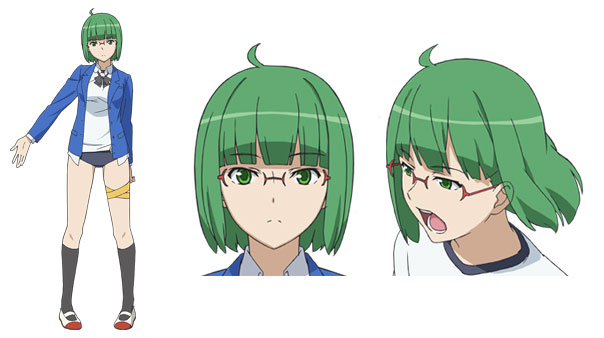 Besides customizing her school uni with bloomers, crossed hip straps, and knee-high socks, the data-mining StuCo Treasurer’s most distinctive feature is her green bob. She’s also quite…dedicated, as demonstrated by her placing of a tracking device in Tenchi’s Danger Zone. 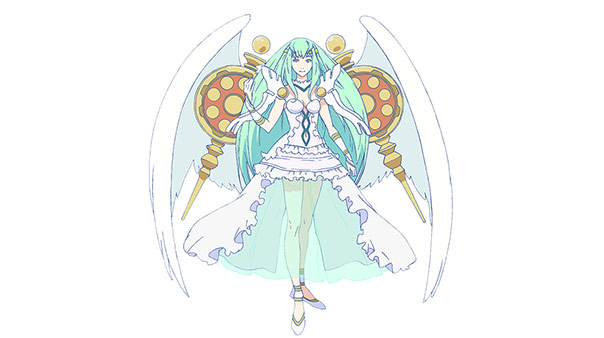 We haven’t seen much of her yet, but judging by her name I’d say Gabriel is one of the angel-like beings who inhabit a realm beyond or above the world normal schmoes like Favaro and Kaisar inhabit. Like Amira, her hair is very pale in color. 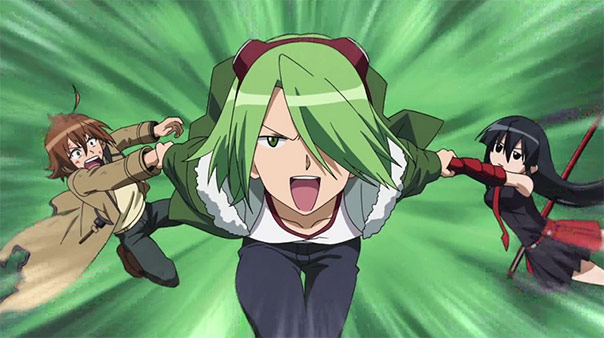 Yes, there is a guy on this list! Lubbock is perhaps the least-used Night Raid member. He likes attempting to peep on the girls as they bathe. His Imperial Arm is a rather nifty and versatile garotte wire, which can be used for attack, defense, detection, etc. He was once a rich and privileged member of the Imperial aristocracy and military, but gave it up for Night Raid’s General Najenda, who he’s always loved but never confessed to. 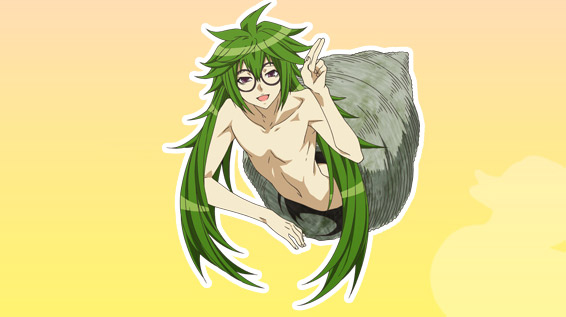 Maki, (another guy! Well…sort of) is a tiny hermit crab…who hasn’t appeared on the show yet. Whoops! Look away! 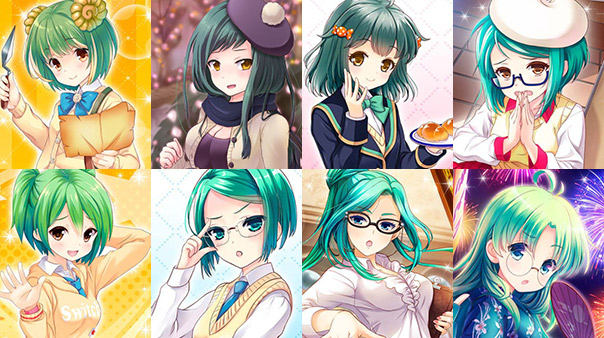 If you like your 2D girlfriends with green hair, the mobile game Girl Friend BETA, AKA Girlfriend (Kari) (literally “provisionally”) has eight choices for you (plus a couple I didn’t include because they were more on the blue side of the spectrum!). All but one (Misuzu) carry over to the anime, though none are main characters, so we’ve had glimpses of one or two of them over the course of the show’s first four episodes. 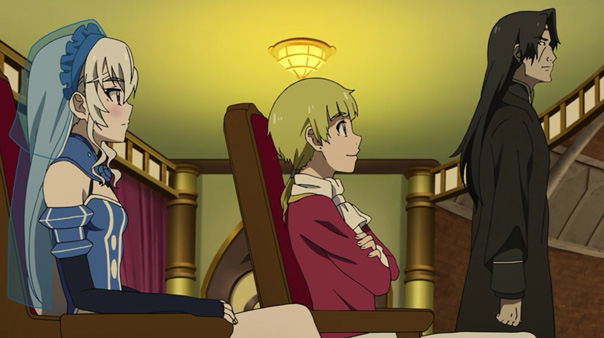 The bad guys Ricky, Layla, and Grad have a pretty firm hold on the situation at the beginning of this episode, and have the benefit of the commander of the opposing flying fortress being an absolute clod (“Advance! Fire!…Keep Firing!” Really?), but as battles rage both within and without the fortresses, that hold grows more and more tenuous as the good guys regroup and persevere. 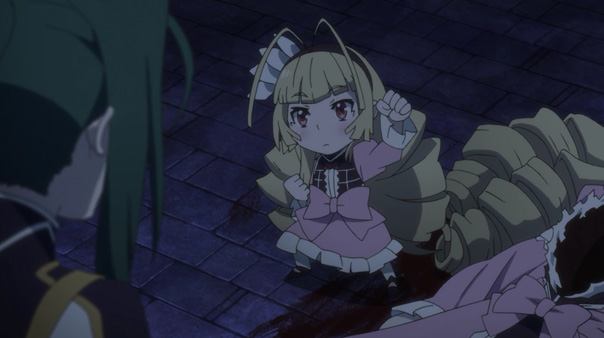 But here’s the thing: at no point do the bad guys ever consider changing their course. They’ve chosen their purposes and paths in life, and they’re sticking with them, even if they lead death…which they ultimately do. This only represents the midpoint of Chaika’s journey, which I’m glad about, and not just because there’s a lot more remains to find, but because the Mad Trio worked far better as a midpoint villain than a final villain. 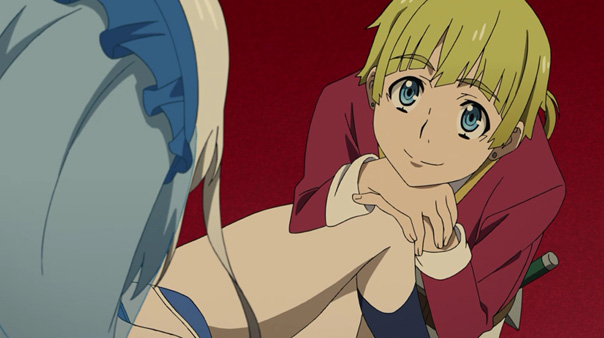 But while this wasn’t the end of the show, it was the end of a great many things. It was the end of Chaika being the helpless damsel-in-distress, as she takes it upon herself to take out Layla and rescue Tooru all by herself. When he protests he’s only her tool and she shouldn’t be saving him, she’s as upfront as she’s ever been to that point with her real feelings for him. They even almost get a kiss in before Akari and the others show up (they kissed a few moments previously, but it was more about the delivery of precious oxygen than romance). 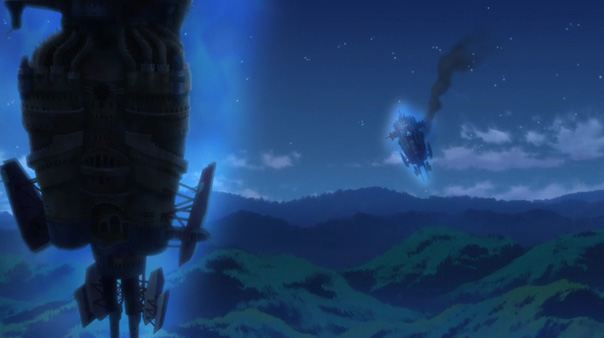 It was also the end of the Mad Trio’s Big Scheme to plunge the world back into the chaos where they once thrived. They were undone by failing to realize that there are others just as determined, and even a little more capable than they are. Take Grad, who didn’t think the opposing commander would launch a suicide attack, even though that’s what Layla just suggested they do when they reach the city. 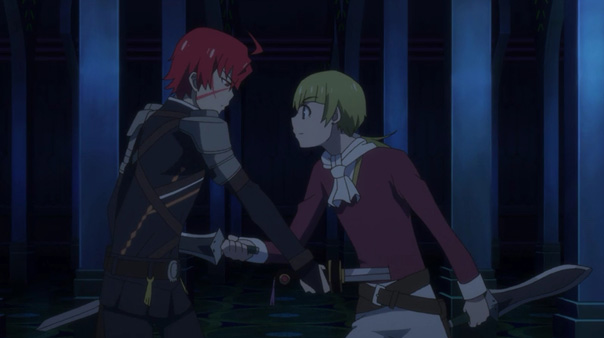 Layla too underestimated Chaika’s desire to escape and continue, in Layla’s words, being a tool of Gaz and his ilk. Layla cast away the purpose programmed into her and forged her own, and I can’t be entirely without sympathy considering the life she’s lived when it finally ends. As for the hellspawn Ricardo, whom she pledged the balance of her life? In the end he comes off as less a monster and more a sheltered, pitiable wretch. 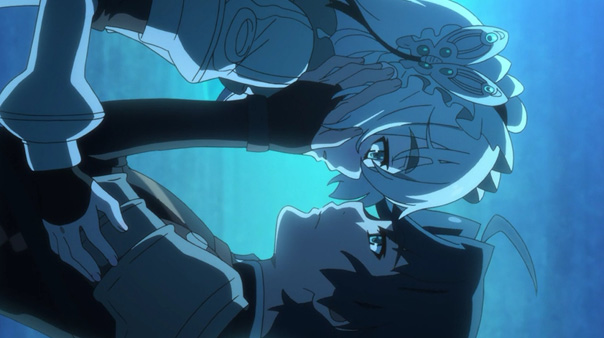 Something else ends: the life of Alberic Gilette. It’s a very quick, almost unremarkable death, but it’s a death that happens when he too is absolutely determined to stop war, even if he has to do it with his bare hands. The way the scene is shot, it almost looks like Leonardo and not Alberic is going to be the one hit by the laser. When Vivi hears he’s gone, she transforms into a Chaika. I wasn’t expecting that! 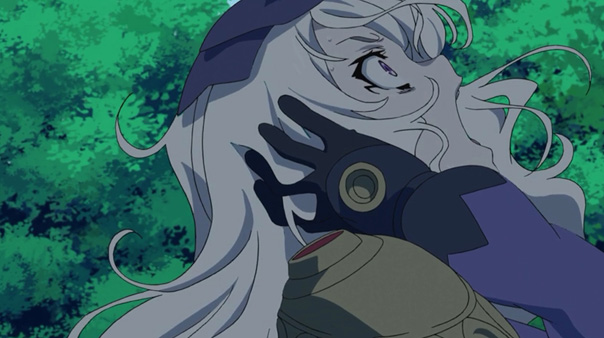 That transformation holds a lot of promise come second season airs, because Vivi suddenly became something else. Frederica can change form and even molt into “Minifred”, but she stays Frederica. I’m not sure what the Vivi-Chaika will be like, but it looks like one more way in which Gaz and his followers set up a diverse array of tools. I also hope the budding romance between Chaika and Tooru is explored further (though I’m probably in the minority). 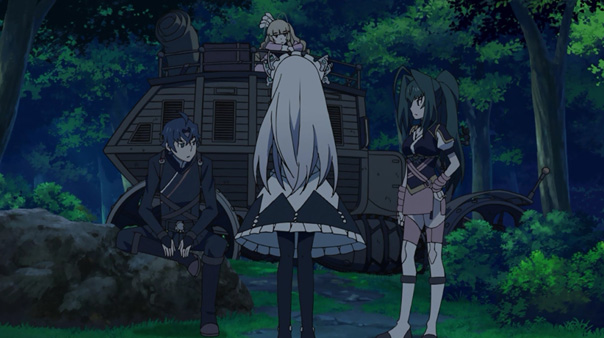 Until then, we leave a tool who knows she’s a tool but is going to keep tooling around anyhow, along with her tools who know they’re tools but she’s told them they’re more than that, along with the dragoon who still needs to kill Tooru, a Vivi who’s lost her love and her…Vivi-ness, and half a Gaz body—including his head!—left to find. It’s a full plate; one I look forward to scarfing down this October. 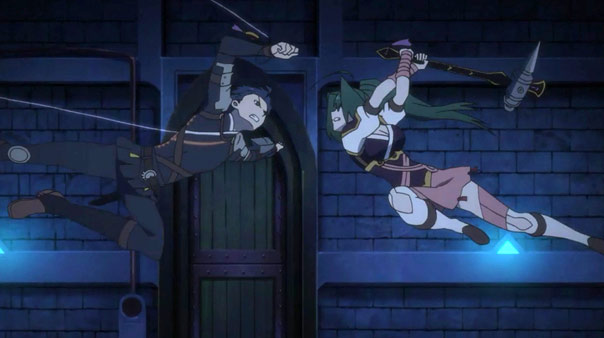 Hitsugi no Chaika has chosen to close with an epic three-part finale, of which this is the middle part. Middle parts are tricky, as it’s hard to have two episodes in a row with no concrete resolutions (it just kind of…ended), while putting that much more pressure on the third part to deliver. Even so, I think this middle part performed admirably, providing a nice balance of action and fresh insights, some of which confirm/reinforce my ideas about the Chaikas. 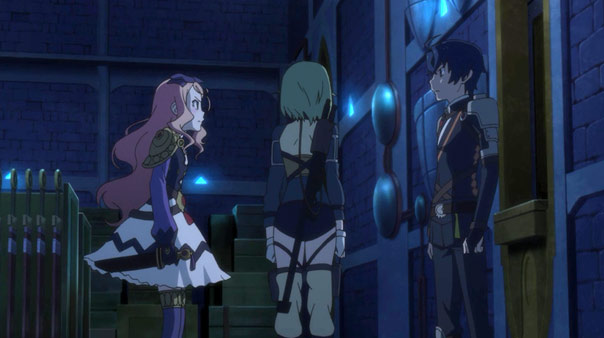 Our heroes remain at the mercy of their enemies, two of whom, Ricardo and Grad, we met last week and got a cursory idea about what makes them tick. The third girl, Layla, only revealed her duplicity at the very end, but when I saw her for the first time with her hood concealing her face, I was pretty darn sure she was another Chaika. Like our Chaika and the Red Chaika we met previously, she too is driven to collect Emperor Gaz’s remains. The difference is how they all go about it.

Red Chaika is a warrior. Our Chaika is a damsel in distress. And Layla is, or rather, was, a seductress, using her body, wiles, and drugs to acquire remains. Once she learned she was only one of many tools with diverse talents created for the sole purpose of re-appropriating Gaz’s remains; that her heart and soul and emotions and memories were all essentially manufactured for that purpose, she quit being Chaika, joined forces with Ricardo and Grad, and now lives for her own purpose: to help them start a new war. 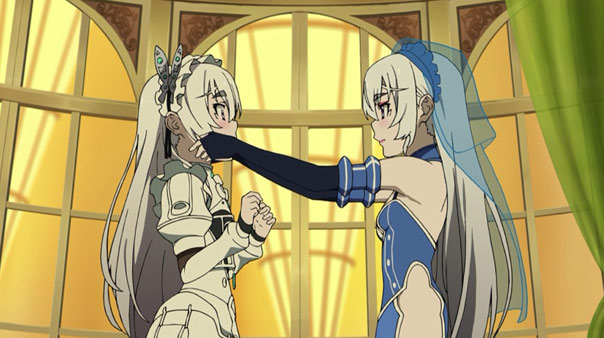 War, you see, is when those two felt most content, and, more importantly, most useful. Ricardo’s bloodlust and Grad’s desire to dominate could find true and enduring expression. They’re really more over-the-top versions of Tooru and Akari, saboteurs who had nothing left to sabotage after the war. The atrocities this trio has committed condemns them to villainhood to be sure, but on one point we can feel for Layla: wanting revenge against those orchestrated this whole dastardly plot. Why should she let it continue? 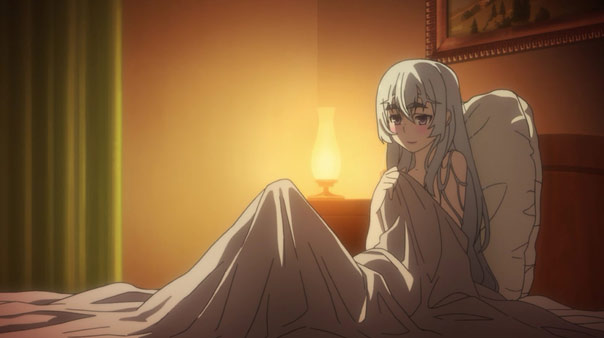 But our Chaika isn’t like her…at least, not yet. Not only is she still committed to gathering her “father’s” remains even after all Layla has said, but in doing so she’s given the Acuras a new purpose. With their flying fortress packed with magical fuel-giving corpses and drug-manipulated soldiers, Ricardo, Grad, and Layla aren’t going to be satisfied with a grand adventure. They want to set the world back on fire and dance in the flames. And by episode’s end, they’re very close to achieving that goal. 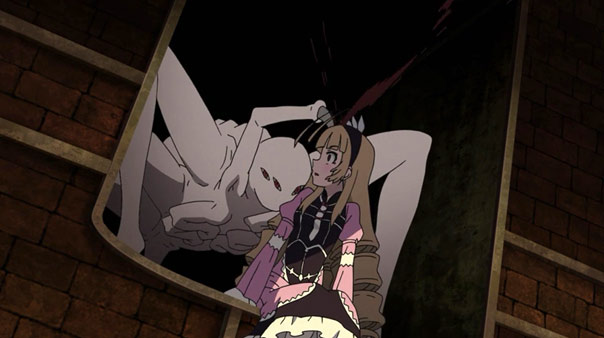 It would seem that as tough-as-nails as Akari is, her older brother would seem to have a slight edge over her in combat ability. I say that because he manages to evade and withdraw from her attacks on numerous occasions while consciously trying not to kill her, while she’s most definitely trying to kill him. I’m also on board with Tooru teaming up with Zito and Vivi when they cross paths, saving each others’ lives in the process. 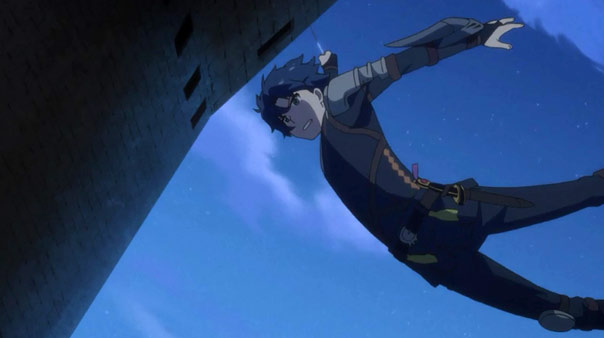 Perhaps the best feint of the episode was the heroic arrival of Fredrica, who seemed poised to rescue Chaika when a creepy-ass human-like spider thing snuck up behind her and stabbed her in the brain. It continues the trend of the show using her sparingly; if she were always around to save the day, things would be pretty boring. It was also a promising sign that this mess won’t get wrapped up by a last-seond deus ex machina, but hard-earned with with blood, sweat, tears, and wits.