Here’s when I thought things would get a bit…tricky.

I was a bit anxious about using public transportation, not knowing what all the flashing characters were trying to tell me, but after using it all day I have no idea why I was at all; it was easy as pie. There’s a slight learning curve to the iconography, but with a combination of bilingual signage and distinct colors for lines and numbers for stations, I had no problem navigating my way around Tokyo.

First, I followed the enormous mass of suited salarymen (and women) clutching phones and coffee to Shinjuku station, the busiest train station in the world by daily passengers (more than 3 million) A typicall trip on the Toei or Tokyo Metro subways costs 160-170 yen. I took the Toei Shinjuku line (leaf green) to Kudanshita, a station near the Imperial Palace complex. The imperial gardens and nearby museums were closed, it being Monday, so I hopped back on the subway on the Metro’s Tozai line (blue) at Takebashi bound for Nihombashi. The whole business district area east of the palace is called Marunouchi. The red line is named after it.

Nihombashi had a 19th century stone bridge with intricate bronzework, but was concealed by a highway overpass. In Tokyo, hardly anything save the palace is sacred, and they will build over/around/on top of whatever they don’t feel like tearing down. I also saw the Tokyo Stock Exchange, but couldn’t go inside. After mailing a couple postcards with the help of a very nice postwoman, I got on at Ometachi station and took the Tozai line to Iidabashi (missing Kudanshita from brain fart). That was okay, because Iidabashi was a junction for the yellow Yurakucho line, which I’d take to my next destination, Ikebukuro. 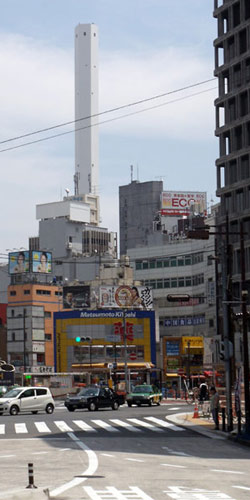 One of Ikebukuro station many exits led up into a Gallery-like mall, where I was surprised to find a Krispy Kreme – they’re all but extinct in Philly. I was fascinated by suddenly being in the same city where the anime Durarara!! takes place, and from what I saw the show portrays the look of the city expertly. In Shangri-la, which takes place in the future, Ikebukuro is a thick and poisonous forest. Here and now though, the place is surging with people and activity. I float around in no particular hurry until lunchtime draws near.

Rather than eat here, I hop on the brown Fukushotin line to Shinjuku-Sanchome, then back on the Shinjuku line to…Shinjuku. After a brief stop at the hoel for a shower, then searched Shinjuku by my hotel for sushi. I espied several businessmen entering a promising place and followed them, and was not disappointed. Utilizing once again the big pictures on the menu, indicated my choice and received large amounts of delicious, dead raw fish and sea creatures, all for under 1000 yen.

As miles of walking in my Nikes had virtually ruined my ankles/knees, I decided to bite the bullet and purchase decent walking shoes with arch support. I went to Keio, one of the massive department stores positioned around Shinjuku Station along with Odakyu and Mylord. Each has at least eight floors, the bottom of which are massive gourmet food markets selling every kind of food imaginable. I wasn’t hungry, unfortunately, but I did need shoes, so I took the elevator up to the fifth floor. The elevators were attended by extremely well dressed and groomed, polite and soft-spoken ladies with white gloves. I found some comfy Gore-Tex Brooks for 15,700 yen, for which I was able to use a credit card.

Thus equipped, and having purchased Buffrin (the only pain medicine with western letters I could decipher; don’t want to be wrong about labels where drugs are concerned) I hoped to lessen the fatigue on my walking bits as the week continued.