Last week was a half-baked and tedious exploration of the online content culture featuring an unlikable YouTuber. But that was just one episode of a show that can be about a lot of different thing. The first two episodes were decent, and this fourth happens to be the best yet. It’s also the heaviest emotionally, starting out the night of Christmas Eve with Makoto encountering an old man named Nanjou at the very spot where his son Toshi was killed five years ago.

Nanjou raised Toshi alone, and couldn’t keep him out of trouble, but considered him a fundamentally kind boy. His appeal to Makoto is simple: find out what happened to Toshi and who is responsible. As thanks in advance, he gives Makoto a ride home in his Jazz Taxi, which sounds like just about the perfect way to get a ride home on a snowy Christmas Eve night in they city.

Thanks to Takashi, Makoto learns that Toshi started a gang in Ueno called Team Apollo. As a mediator of note with powerful friends, Makoto walks through the territories of various gangs with confidence, but he’s initially regarded by Apollo as a trespasser trying to stir the shit. They refuse to tell him anything about Toshi, and when he doesn’t give up, they beat the shit out of him.

But it seems clear to Makoto that he wouldn’t get anything at all out of Apollo if he didn’t let them beat him up a little, then come right back with no hard feelings…and Toshi’s dad. Makoto’s mom assures Nanjou that Makoto gets in scraps all the time, but he’s tough and can take it, and she’s right! Makoto ends up meeting the current Apollo leader, Rintarou, who reveals that Makoto beat his girlfriend Harumi, as well as her eventual husband, Kouji.

That leads Makoto to meet with Harumi, whose son Akihiro is treated by Nanjou like his blood grandson. In truth, after suffering brutal beatings by Toshi, Harumi found comfort, safety, and eventually love in Kouji, and Akihiro is his son. She was already pregnant with Akihiro when she told Toshi she was leaving him.

Harumi’s story is familiar and sadly all-too-common: at one point she loved Toshi and he her, but he became increasingly twisted and violent towards her, yet the love was still there, mixed with fear. That’s why Harumi followed Toshi when he ran out of the house that night, only to find him dead. She felt horrible about his death, but also relieved, since it meant he could no longer hurt her, Kouji, or Akihiro.

The question remained: Who killed Toshi? It turns out the answer was right there in the opening scene when we first met Nanjou and Harumi. Makoto contacts his police friend who gives him the details of Toshi’s unsolved murder case. Turns out a young couple was on the scene, and the woman was fairly tall; only 5cm shorter than the man.

When Makoto calls his police friend, that friend is about to go on a date, and he can hear that Makoto is troubled and asks what’s wrong. Makoto ends the call soon thereafter, but his friend was right: this “case” definitely took its toll. Makoto should be with friends or family on this night, but instead he’s all alone in the cold, learning more and more about a story that can only further hurt everyone involved.

Still, he promises Harumi he won’t tell Nanjou that Akihiro isn’t his blood grandson, nor drag Toshi’s memory in the dirt. Aside from the harm it could do, it isn’t his place as an outsider. That’s why it’s gratifying that when Makoto meets with Nanjou to feed him a fake story, not only is Harumi there to tell the truth about Toshi’s violence, but so is the couple who were present for Toshi’s death.

Turns out in his rage, Toshi assaulted the husband, and when the wife shoved away him he fell awkwardly down the steps and suffered a fatal head injury. It was an accident caused in self-defense, but the couple never turned themselves in, and now the wife is with child, making things more complicated. They promise Nanjou that once their kid is born and older they’ll turn themselves in.

Nanjou doesn’t seem eager to let them do that, as it would only ruin their lives and that of their child. Instead, he turns all the blame in on himself; had he raised Toshi better, he wouldn’t have hurt Harumi, not to mention put himself in the position where the young wife pushed him to his death. He apologizes to Toshi, and Makoto, whose father is gone, can’t help but feel pride for the poor old man.

This episode got downright noir-y and hardboiled, and Makoto showed off his detective chops, much of which come down to his considerable people skills (and ability to take a beating). The setting of snowy Ikebukuro adds to the brooding atmosphere, as does Makoto’s early comment about how some spots in the city feel like they’re devoid of air—like the otherwise unexceptional spot where Toshi died.

At least now Nanjou can breathe knowing the truth of what happened and why, and if he doesn’t want to dwell on it, he can always turn up the jazz in his taxi.

Inuyashiki’s fourth episode opens with a ruthless, towering yakuza boss ordering his men to dispose of the naked body of an overdosed woman on his bed, then making another yakuza perform oral sex on him as a form of submission. So…not a good guy.

Then things switch gears completely to the diminutive but lovely Fumino and her boyfriend Satoru, who love each other deeply and agree to get married and have kids. As nice as all that is, I immediately suspected this was either a flashback, and Fumino was that body, or she’s the yakuza boss’ next victim. 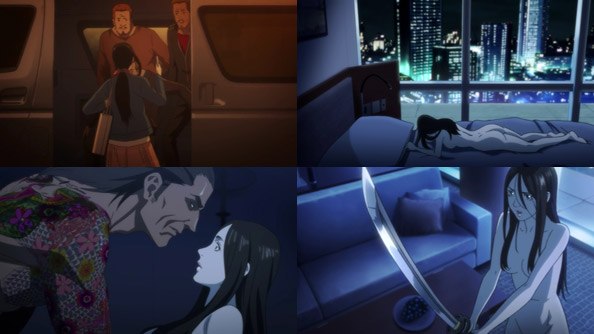 The latter turns out to be the case, as Fumino is suddenly abducted while walking home, and wakes up naked on the boss’ bed. He immediately gets on top of her, telling her he’ll “make her his”, but Fumino fights back, getting away and even managing to slash the brute’s wrist with his own katana. While his men tend to his wound she slips out.

She manages to get all the way back to Satoru’s worried-sick arms, but it’s not long before the boss, named Samejima, and his henchmen break into their apartment. Satoru begs for his and Fumino’s lives, promising to pay any price, no matter what it takes, but his pleas fall on deaf ears, and Samejima picks him up by the throat and starts to choke him out.

Enter the Hero, Ichirou, who no doubt heard what has been transpiring and will not have it. After sending the henchmen flying, he puts Samejima in a bear hug, but “shuts down” when a clip is emptied in his head. When he wakes up, it’s just him and a nearly-dead Satoru.

When his magic body won’t heal him, Ichirou uses CPR to revive him, and then uses Satoru’s phone to locate Samejima, who is enjoying a meeting with other yakuza bosses at a luxurious inn.

While his initial encounter with Samejima was not fruitful, Ichirou has clearly gotten the hang of flying and forcing his way through crowds. When Samejima takes him aside, Ichirou does what he should have done the first time: sock the guy in the face. 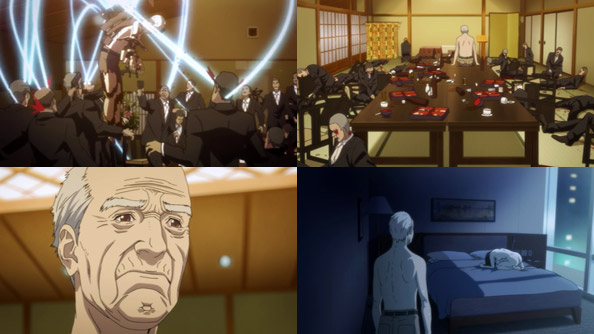 The other yakuza respond by emptying clip after clip into Ichirou with automatic weapons, but it only stuns him. He activates his flight mode, targets everyone in the inn, and takes out all of their eyes with a fusillade of particle beams.

It’s wholesale justice; Ichirou laying down the law, and before leaving, Ichirou makes sure he properly verbalizes what he’s done: deprived all of them of the means to walk, eat, see their children’s and grandchildren’s faces, touch them ever again…or even take their own lives.

Rather than execute them, he hopes they’ll live long lives, in such a state that he hopes they one day feel remorse for the horrible things they’ve done. I for one am not that optimistic, but at least they’ll won’t hurt anyone—including his family—ever again. The cycle of dead bodies on beds has been stopped; at least with this clan. Obviously, there are many others.

After contacting those watching her with Samejima’s phone, Ichirou locates Fumino, apparently heals her of the harm done by the drugs, and flies her back to her love, Satoru.

I’ll point out that Satoru is nothing special in the looks or money department—indeed, he’s very much a young Ichirou—but love, like that yakuza scum, is blind. Satoru and Fumino have good and gentle souls, and I was bowled over with relief and joy to see them reunite.

Ichirou slinks off into the night, claiming he’s “nobody special”, but in reality, he was this couple’s savior. It’s good to see him getting better at this hero thing, especially not getting overwhelmed by the sheer amount of evil in the world and the impossibility of stamping it all out. That doesn’t mean you shouldn’t do as much as you can, and he will.

And so, Inuyashiki continues its M.O. of putting its audience through hell before showing them a glimpse of heaven. Whether it was the intro of Ichirou as a feeble sadsack or the stunningly awful but thankfully temporary twist in Fumino’s fate, the show has no qualms about putting characters and viewers alike through the ringer, but rewards us for sticking around by delivering breathtakingly righteous justice to evildoers.

Only Shishigami Hiro has escaped retribution…so far. But the strongest yakuza boss in the world is a cakewalk compared to Hiro. If Ichirou can’t defeat him and he can’t defeat Ichirou, they’ll have to figure…something else out.