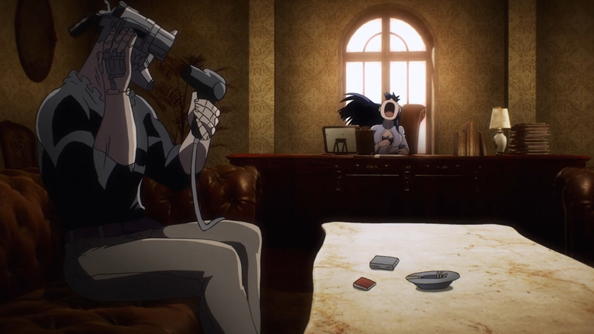 With Mary, Tetsuro, Scarlet and her dad all in safe EMS custody, Juuzou can focus on tracking down and apprehending Hayden Gondry, who just happens to be the first renegade Extended case. Why he was being transported in an ordinary paddy wagon with three other prisoners is beyond me (if it were me I’d keep him on the prison island) but he’s loose, and he’s already murdered three people.

Olivier (whose compulsion to smell really bad smells is an interesting detail about her) warns Juuzou to take their arrangement seriously and bring Gondry in alive so he can face a formal trial. Judging from the photo on her desk, Olivier seems to have a personal stake in this case: either Gondry killed her father, or is her father. 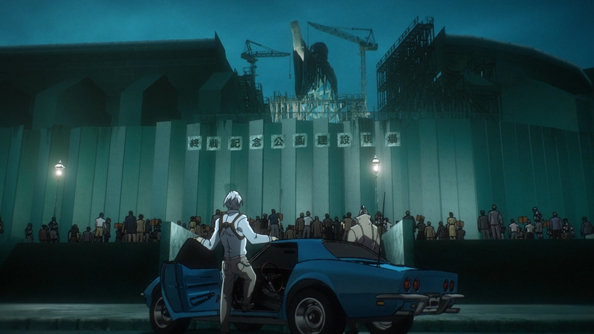 Juuzou visits the mansion of the latest victim, walking past a photo that could be a young Mary, but his work is interrupted by the arrival of Section Chief Kronen, and the two fight until the latter is out of poison needles. Juuzou makes the connection between the three victims—they were all “extension subjects” for the first-generation unit, Tindalos.

He also knows who the next victim will be, so Kronen gives him a ride in his vintage Corvette to that next victim’s present location. That would-be victim, the famous and well-loved world’s first full-body Extended, Tokisada Mega Armed, is inspecting a massive statue being constructed in his honor. On the way to Armed, Juuzou encounters a cute young child who isn’t scared of his gun face. 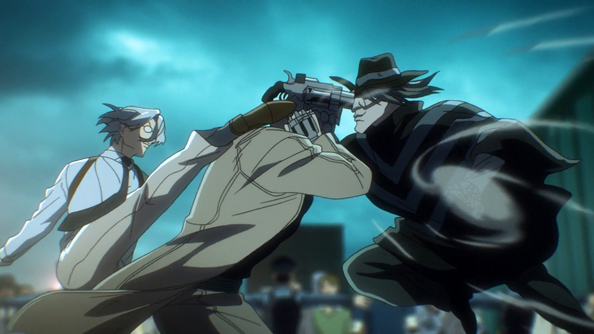 As Armed is moving through a crush of admirers, Gondry strikes—and is instantly captured by Juuzou. Gondry breaks free, and Kronen hits Juuzou with more needles because he’s in the way, but then Kronen launches a kick at Gondry but hits Juuzou, whose head smashes what is revealed as a Gondry mask—only a decoy.

Meanwhile, Armed has gotten away—incidentally, with the same cute, innocent kid with whom Juuzou crossed paths. That turns out to be bad news, since the kid is actually the real Gondry, who is able to change his form and use holography to mimic the girl. We’ll see if Juuzou and Kronen can put aside their differences, because it will probably take both of them (and possibly more) to bring the guy down.

While there are a couple moments of decent humor and action, this episode was a bit of a drag, groaning under the weight of too much exposition and setup surrounding someone who is, so far, a two-dimensional murderous baddie. I also missed Mary and the others; while it’s logical to detain them for their safety, it would have been nice to cut to them at least once. 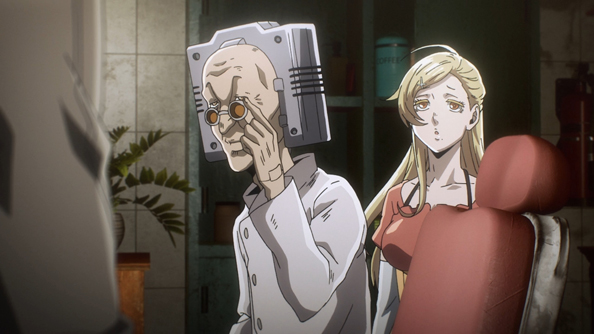 This week introduces a number of characters who have been previewed in the OP and ED (the latter sporting very different character design). We start with Juuzou’s new landlady Christina, his “barber” who is best at cleaning his gun components and calls him “Zippo-chan”, and the barber’s daughter Scarlet, who seems to have a thing for the big guy but often stumbles on her words.

The more the merrier, I say, particularly where quirky colorful characters are concerned. They add depth and dimension to this cyberpunk world, and this week underscore how tenuous Juuzou’s grip on his freedom and the safety of the civvies he knows is, especially now that he discharged his head to defeat Spider-Ende. 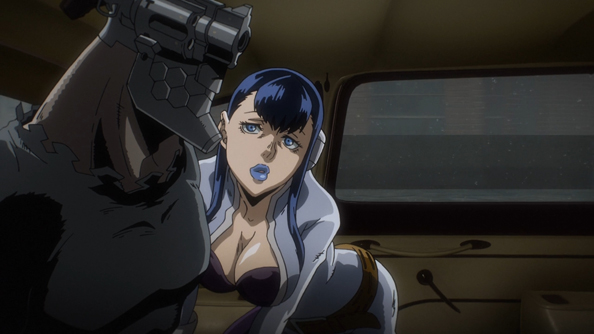 The woman in charge of keeping Over-Extendeds in line, immune or otherwise, is the blue-(and very full)-lipped EMS director Olivier, who storms the barbershop in the blink of an eye with her Extended SWAT team. Juuzou pretends she’s not even there and asks the barber to keep cleaning his parts.

When Tetsuro and Mary come with leftovers for the Barber and Scarlet, they end up in the middle of things, and all of them end up arrested along with Juuzou. But turns out it’s all for show: Olivier and Juuzou have an arrangement where she smooths out any legal problems he causes, and in exchange she does something for him.

In this case that means capturing two of the seven prisoners who escaped from a van during transfer from the remote, supermax Over-Extended prison Wunder Bender to Berühren (a different arrangement between EMS and the megacorp in exchange for tech EMS needs). One of the two makes it easy and shows up to disrupt the EMS convoy, sending the wagon with the civilians (which Juuzou asked to be brought along for their protection) over a bridge. Somehow they all survive…I guess people are just tougher in this world.

Anyway, the escaped prisoner is called Hug Bear, and loves to give his victims bear-hugs with his meat grinder-like Extended muscles. He takes out some of Olivier’s men and is about to turn on Scarlet, Mary and the others when he is immobilized by yet another new character, Section Chief Kronen. That leaves just one prisoner remaining, who happens to be the most dangerous. What a coincidence!