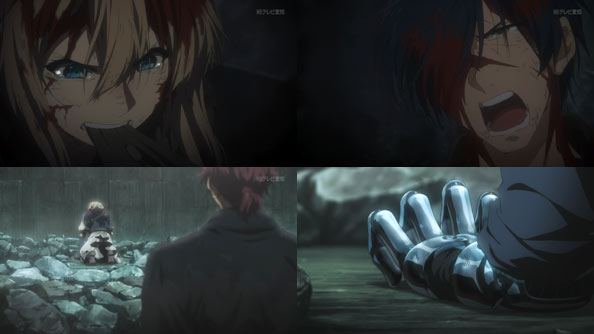 A tool cares nothing for itself. It doesn’t even consider itself a “self”. It only has purpose in the hands of its master. No master, no purpose. Violet was only able to get as far as she did as an Auto Memoir Doll because she thought the Major was out there somewhere, they would one day reunite so she could be issued fresh orders.

Despite Gilbert’s attempts to appeal to her humanity, Violet had been so conditioned for carrying out orders and nothing else that even when she loses one arm to a bullet and another to a grenade, she’s still compelled to try to dress his wounds with her teeth, until he has to all but order her to stop.

But now there are no more orders to look forward to, and Violet is lost in her past. She revisits the ruin of the castle where he fell, perhaps harboring a glimmer of hope everyone was wrong, and Gilbert was there after all. It doesn’t take long for that hope to be crushed, which is just about when Claudia and Benedict arrive to pick her up. 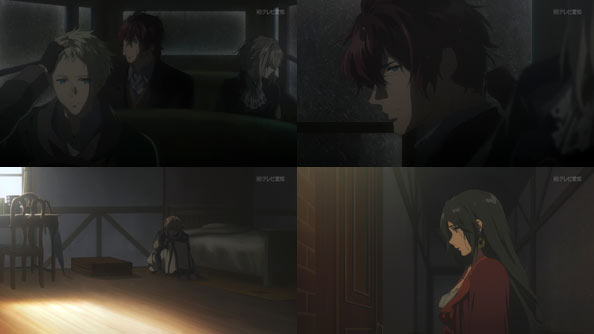 Claudia explains his need to withhold the truth from her when she was admitted to the hospital; she was more concerned with Gilbert than herself, but Gilbert demonstrated to Claudia on the eve of battle that he never saw Violet as a tool or weapon, but an ordinary girl he’d taken it upon himself to care for.

Gilbert had hope of his own: that one day Violet could be an ordinary girl with a purpose and emotions and dreams all her own. And even if he wasn’t around to meet that girl, he entrusted Claudia to care for her in his stead. Claudia perhaps understood more than Gilbert did just how difficult a transition from weapon to person would be.

Still, he doesn’t regret how he’s handled things. Cattleya thinks him heartless to tell Violet she’s “burning in the flames of what she’s done”, but it’s true, and it’s not something unique to Violet. Everyone has lost people, and parts of themselves. There’s nothing for it but to accept those flames, and they’ll gradually subside.

Upon returning to Leiden, everyone is worried about Violet, but also keep their distance out of respect. She sits in her dark room, alone with her flames, her grief and regret. She dreams of returning to the steps where she last saw Gilbert, but he’s not very nice.

Dream Gilbert essentially repeats the words his brother said to Violet at the port—words that appeal to her guilt over being able to write letters that connect people with the same hands that took the lives of so many others. She cries. She makes a mess. She puts those hands around her throat and contemplates joining the major. 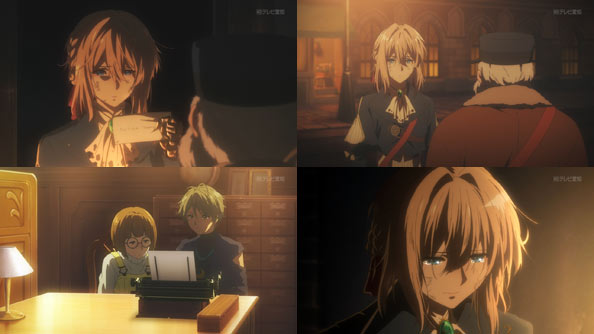 Then there’s a knock at her door and she receives a letter; her first. Before reading it, she helps deliver some letters an errant delivery boy abandoned, and seems to enjoy ensuring the thoughts and hearts and souls of those who wrote them find their way to where they belong.

The letter addressed to her was written by Iris and Erica, figuring writing Doll-to-Doll was the best way to maintain that respectful distance while making sure Violet knew they were worried about her and are hoping and waiting for her to return. Additionally, Spencer requested her by name to ghostwrite an apology/thank you letter for his sister Luculia.

In this way, Violet gets back to work, the embers still glowing but the flames perhaps gradually subsiding. Spencer’s hope was to express gratitude for the one who got her back on her feet, all the while unaware that he’s helping Violet to do the same.

On her way back to the office, she spots a newspaper article featuring Princess Charlotte and her new husband meeting with children, as well as an advertisement for Oscar Webster’s newest play about Olivia. It’s a little on the nose, but it’s important that she she be reminded of what she’s done since her military career ended.

That’s because when she rushes to Claudia’s office to ask him if it’s really, truly all right for her to live on, he tells her that while the things she did back then can’t be undone, neither can the things she’s doing and will continue to do as an Auto Memoir Doll. Not only is it all right to live on…it’s essential. Both the show and this episode share her name. They are hers, and so is her life. Time to start living it. 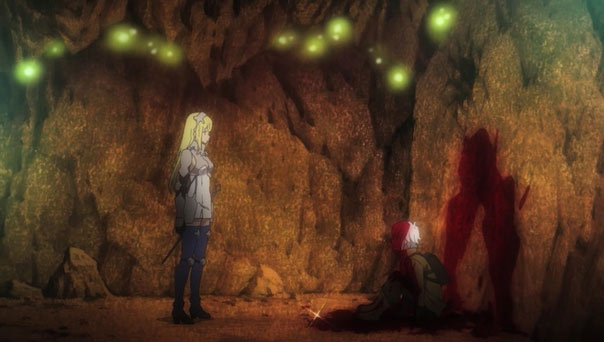 My Spring 2015 opens with the charming Dungeon ni Deai wo Motomeru no wa Machigatteiru Darou ka, which almost immediately reminded me of Hitsugi no Chaika in a good way. The cold open is quick and efficient, setting up the god-and-mortal cooperation setup along with a battle in which the serious Saber-like girl (Ais) saves the somewhat Vaan-like mortal guy (Bell), who falls for her on the spot.

Besides this simple but effective reversal of the classic rescuing knight trope, one little detail I liked was how a outdoor merchant reacted to Bell running past, spattering minotaur blood on his stall. He doesn’t yell like I expected; instead, he holds back an amused teehee. This isn’t that a harsh world, and Bell is a bit of a lovable buffoon who bit off more than he could chew.

Bell lives with his appropriately-named goddess Hestia (virgin goddess of the hearth and home), who is perhaps not so appropriately dressed, but I’ll give her medieval clubbing outfit a pass since she’s a goddess. Hestia is all Bell has, and he’s all she has, but he wants more, and while he’s growing bigger and stronger, she is unchanging in her goddessness.

I’d say Hestia had a brother complex were it not for the fact Bell isn’t her real brother, but their relationship is very much familial rather than romantic, and while he happens to notice her not unsubstantial bust when he wakes up to her spooning him, it’s clear she’s the underdog against Ais, his new object of affection. 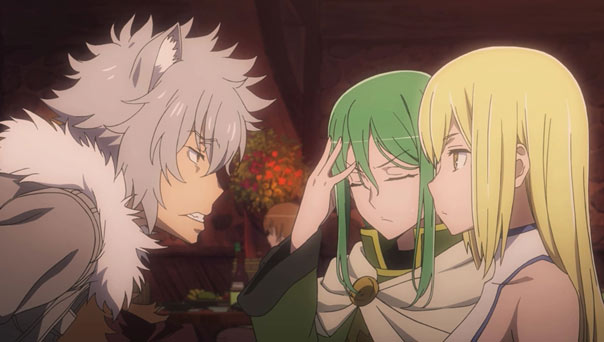 Bell and Ais only meet face to face in that cold open, but she shows up again in a tavern where Bell is weaseled into buying a ridiculously expensive meal by Syr, one of its servers. There, he and everyone else watches in awe as the Loki familia to which Ais belongs swagger in to celebrate. One of its members has a big mouth and wants to put “tomato boy” Bell (whom he doesn’t know is sitting in there listening) in his place.

In his drunken mocking rant, this guy Bete rather conveniently lays bare all of Bell’s insecurities, namely the patriarchal drive to gain a lady’s favor and become worthy of her by protecting her. He’s also driven by the words of his late grandpa: a dungeon is the best place to meet and prove oneself to the fairer sex, which is an only slightly modernized take on a tale as old as time.

Bell is clearly not strong enough yet to protect Ais, but simply crossing paths with her seemed to start him on a new and accelerated path of improvement. But when he runs out, unable to hear anymore harsh lip from Bete, I got the feeling that perhaps Bell won’t have to surpass Ais so much as catch up to her, that they might fight side-by-side, rather than one or the other being the hapless benefactor of the others’ strength. Bell certainly hasn’t captured her heart, but he has her attention.

Bell’s sudden spurt in strength and ability is also something that worries Hestia, because it could mean he’ll drift further and further from her as he draws closer to Ais. But we see just how far Bell has to go when the overzealous brother figure returns home half-unconscious in the morning, utterly dependent on her care.

DanMachi has a hearty helping of J.C. Staff fanservice, and Bell seems to have “lucky dull guy syndrome”, but the first episode does a decent job easing us into its world of gods, magic, and Western names. The show is easy on the eyes and neither hits us with a barrage of terminology nor skimps on the fantasy charm. Overall, a promising start. I’m interested in how Bell gets closer to Ais, and how that’ll effect the nice thing he already has with Hestia.