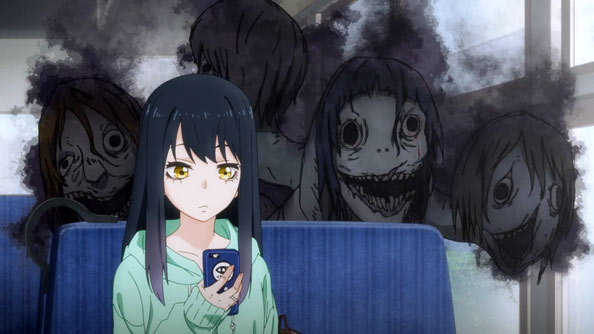 It’s the weekend, and Miko is meeting Hana at a Starbucks ripoff, but she has to take a bus, and the bus is full of ghouls. She comports herself pretty well throughout the ride, only to miss her stop because she’s trying to distract herself from the monsters so much, she forgets to get off at that stop. Fortunately the airheaded Hana did the same thing without an assist from ghosts.

That means Miko arrives at the cafe first. There, she finds a dashing young man waiting for his date, but that doesn’t stop him from hitting on Miko before she arrives. He thinks Miko is staring at her, but she’s staring at a possessive ghost haunting him, while his girlfriend has a half-dozen ghosts haunting her, suggesting these two heartbreakers were made for each other. Miko’s solution for not drawing the ire of the lady-ghoul is to pretend she’s into super macho wrestlers on her phone. 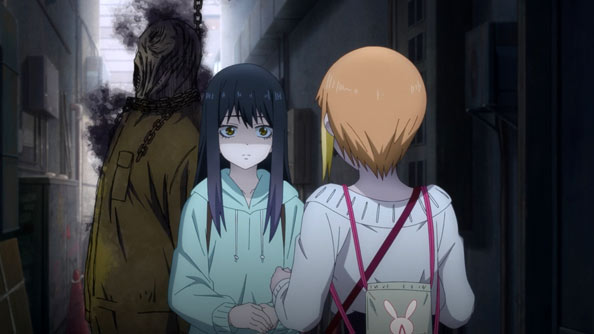 Once Miko and Hana finally meet up, it’s time to buy some prayer beads. Only the first instance in which Miko has to use them, the elastic snaps and the beads go everywhere. Miko knows how much Hana attracts ghouls and wants to protect her, so she takes one for the team and walks through a particularly big and nasty ghoul in a yellow jumpsuit, so Hana doesn’t have to.

Seeking stronger beads leads Miko to a fortune teller whom we learn is just a petty scammer since we can hear her inner monologue. However, she can not only tell that Miko is haunted by ghouls, but that Hana has a dazzling aura that’s like frikkin’ catnip for ghouls. So the lady decides to give Miko a set of beads with what seems to be legit ghoul-repelling power…only for those beads to break too.

Ultimately, Miko decides to give up on prayer beads, as they seem to welcome more ghoulish attention. As for the fortune teller? She closes up shop and turns a leaf, accepting her kids’ invitation to move in with them. Little does Miko know the change she instilled…

In the alleged second-to-last episode of Asterisk War (at least of its second season), Julis storms out of a lot of rooms. She feels overprotected and unconcerned with threats like Gustave Marlowe, confident she and her friends can take care of themselves.

However, whether she likes it or not, her Festa victory has skyrocketed her “value” to the IEF. When Jolbert asks if she’ll at least consent to becoming engaged to Ayato (so the IEF won’t marry her off to someone worse), and asks her not to participate in Gryps Festa (lest IEF put her on the throne, where she’ll suffer in frustration and futility). 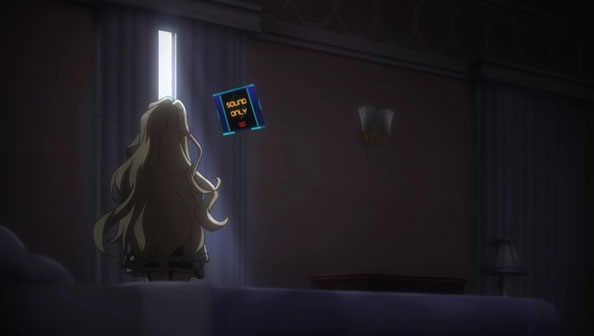 Meanwhile, Claudia continues her trend of talking in dark rooms, this time to Yabuki, who’s involved in a lot more than we ever get to see. While it sometimes results in things getting fairly jumbled up, I do appreciate that Ayato and Julis aren’t in the center of everything, and like us, aren’t aware of everything going on just beyond their periphery. 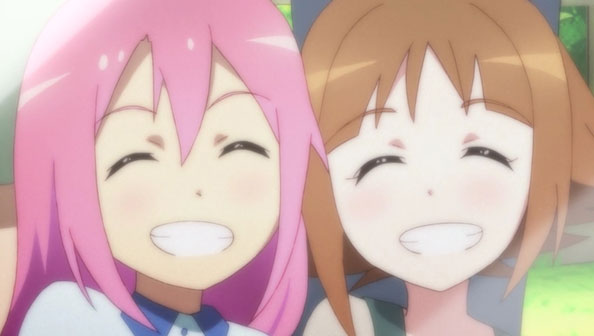 Julis goes to her orphanage to cool down, and Sister Therese and the nuns seem like warm and pleasant folk. But when Julis’ long-lost friend comes up, she has to storm off again, only to find that friend—or whatever it is she’s become—driving past in a limo.

First of all, coincidence much? Secondly, shouldn’t a fancy limo like that have tinting that would keep people from seeing who’s inside? Telephones project little “Sound Only” holograms in the air; you’d think this world would have window tinting down.

With that somewhat sudden and clunky coincidence, Julis runs after the limo, ending up in the snowy mountains, and Ayato follows her because, well, what else is he going to do? She manages to find her quarry: a bored-yet-imperious white-haired girl named Ophelia, who quickly demonstrates that neither Julis or Ayato are any match for her.

Then Gustave, the assassin from last week, shows up, asks Ophelia if he can kill the two, Dirk calls and summons her home, and she splits, leaving a winded Ayato to juggle protecting an out-cold Julis and fighting not just a two-headed dog, but a three-headed dog as well! Talk about a weird, random predicament.

Claudia ends up rescuing Ayato and Julis and forcing Gustave to withdraw, but the battle lines have been drawn. Gustave will be back, and no doubt Julis will keep going after her former friend…if that’s indeed who she is. It’s looking more and more like we’re getting a third set of twelve eps (at least): there are simply too many balls in the air to catch them all next week.

Not long after a casual discussion with Julis over their Winter vacation plans, Ayato, Saya, Claudia and Kirin are whisked away to her home country of Lieseltania, first aboard a private jet, then a Rolls-Royce limo through a jubilant victory parade, and finally given rooms at a humongous palace.

There they meet Julis’ brother, King Jolbert, and his wife Maria, who plan to hold a banquet in their honor to thank them for helping his sister. The cold open actually handles the breathlessness of such a sequence of events quite well. It also shows how relatively down-to-earth Julis is, despite her regal home situation

Of course, this is only another venue in which to rub in Saya and Claudia’s faces the fact that Ayato belongs to Julis first and foremost. Saya swallows her pride and commits herself to staying by Ayato’s side if ever he needs aid, without getting into any kind of romantic talk that might end up with her rejected.

Similarly, Claudia seeks to unite both Ayato and the others on her team in the upcoming Gryps Festa, which will be no picnic, judging from all the names they throw around.

Asterisk War has never been all that interesting in terms of cloudy politics, but we get a lot more of that at the banquet, when after explaining that her country is a puppet state and her brother a cooperative puppet, she points out all the ladies around him who are his lovers…and also spies.

Jolbert is almost a grown-up version of Ayato, perfectly comfortable juggling women without a care in the world. Ayato does care, and he’s a little overwhelmed by the evening dress of his girls, who also all want to hang on his arm but aren’t quite sure how, so they simply glom onto him. 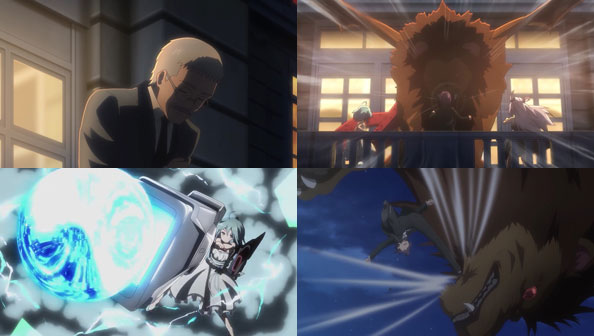 Finally, things take a little turn for the ridiculous, as a battle springs up in the middle of what had been a very peaceful episode. Some butler dude with a bionic eye summons a giant chimera of all things. Fortunately, Saya has a weapon stashed under her dress, Julis can use her strega powers without a lux, and Ayato is perfectly capable of bringing the beast down with his martial arts.

It seems this was a warning more than anything else, though butler guy seemed to have hoped the chimera would have polished Ayato off. He doesn’t want him joining Claudia’s team, but something tells me Ayato is going to anyway, and he’ll deal with the challenges that result with the rest of his team.