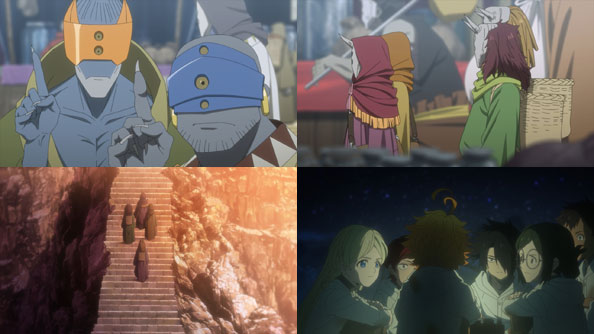 It’s been almost a year since the children escaped from Grace Field House. Rumors of how they have yet to be hunted down spread in a demon city, but more often than not they’re dismissed as having died long ago. All the while, those same children who escaped a year ago are walking among the demons who’d do almost anything for their high quality meat.

Neverland does a lot of efficient world building this week, and this opening scene lays bare the general social strata of the demons. Ordinary demonfolk who shop in the street markets will never see, let alone taste Grace Field meat. As for the kids, they’re older and wiser and more capable and resourceful than ever, but food is still scarce. The struggle for survival is constant. 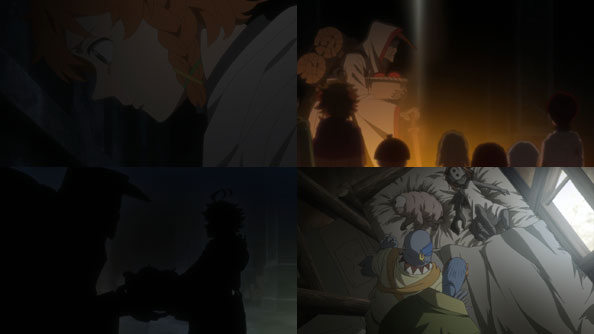 While each and every one of the younger kids are absolute troopers, not even complaining about eating only thin soup day after day, the decision to leave the farm weighs heavily on Emma each night. When she can’t sleep in the night, she faces a wall, cursing her shortsightedness and arrogance.

Ray reminds her they all made the right choice—the only choice—to leave. If they hadn’t, Ray would be dead, and the others would soon find themselves on the wealthier dinner tables of the demon world. Better underfed than dead.

Their hilltop temple hideout is periodically visited by a solitary demon, who is blind and walks with a cane. He knows there are children there, but it’s left up in the air whether he knows whether they’re human. Perhaps he can’t smell so well anymore, or perhaps he’s just a very nice demon.

For the first time, Emma helps him when he drops his offering, and he thanks her before leaving. Gilda scolds her recklessness, but even if the old man is a human-eating demon, she couldn’t let him continue to fumble in the dark.

Returning to the pair of demons from the market, we see that they are trying to keep two starving demon children from degenerating to wild (and presumably vicious) state. But the low-grade, vat-raised human hand is hardly enough. When one of them reminds them of the Grace Field stock is still at large, they start to seriously consider searching for them. 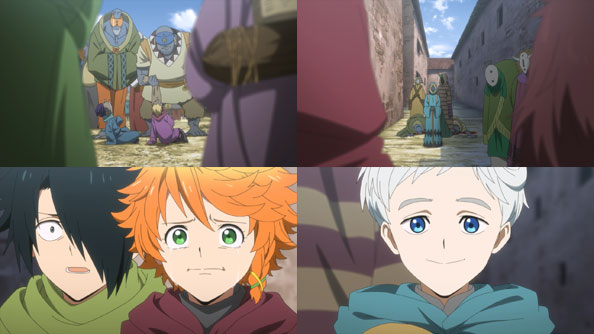 These aren’t the plans of evil monsters who kill for sport, they’re desperate adults trying to save children with no other options in sight. This is the state of the demon side of the world a thousand years on. While there are certainly bad actors, demons are no longer homogenously “evil”, any more than the humans on the other side. There have no doubt been generations living under this system, and know of no other system.

It’s in this newly expanded picture of this world that we find Emma and the Kids fighting against the long-established norm, daring to sneak into towns to collect enough food to keep everyone alive. This week Thoma and Lannion convince Emma to accompany her, Ray, Gilda and Don, but they end up bumping into that desperate demon pair, and a stiff wind fills the demons’ noses with the scent of humans.

An tense and intricate chase ensues, one that demonstrates just how extensively the kids have trained and practiced evading pursuers. Emma and Ray end up luring the pair away while the others melt into the crowd, only to end up cornered by the pair and a group of other demons who have taken interest.

Then one of the other demons kills the pair who were chasing Emma and Ray, and a blue-cloaked demon lifts his mask to reveal none other than Norman. HI NORMAN! Not only is he still alive, he’s got some friends. Looking back at the beginning of the episode, he’d already  spotted Emma & Co. Months after losing their blessed shelter and on the cusp of losing hope for survival, the universe has graced Emma and the kids with a blessed break. 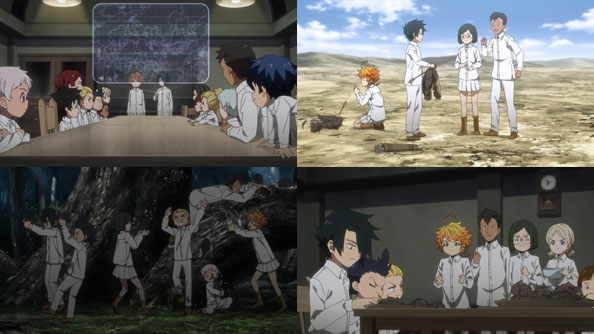 Last week’s cliffhanger wasn’t all that dire for the kids: Minerva’s phone call is merely a recording apologizing for not being able to meet them in person, revealing he once worked for the farms before revolting, and providing the password for the pen to display map to the human side of the world. The creepy messages and journal were from a previous batch of escapees, only one of whom remained before they chose to make a run for the border.

What our kids don’t know is what ever happened to that lonely last escapee. All they know is they can use the shelter as the headquarters for their plan, which still involves returning to the farm, freeing Phil and the others, then freeing all of the other children in the other farms. Far from not pragmatic, this plan seems far too difficult and doomed to failure, considering how few grown kids there are to pull it off.

Still, it’s clear Emma isn’t going to the human side without fulfilling her promise to Norman to free everyone, so they set to work making the shelter a sustainable place, including growing crops, hunting birds (and later gathering slimy fish) for food, and teaching the younger kids marksmanship. 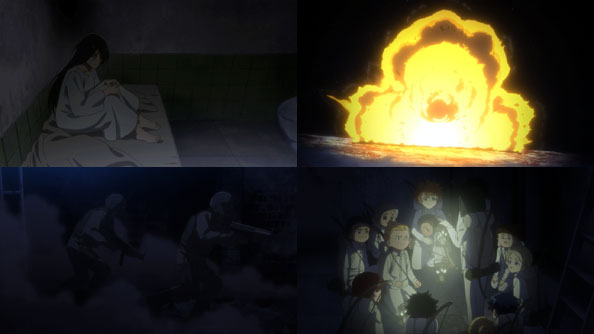 As they settle into a happy and all-too obvious false sense of security, we check in on their former “Mother”, Isabella, who is in jail for allowing the escape. When the demons come, she’s pretty certain they’re there to execute her. Back at the shelter, a peaceful evening is shattered by an explosion blowing one of the hatches clean off, knocking out the power.

A human strike team then infiltrates the facility, where all the kids escape using the hidden passage behind the piano. Don’s one of the last into that passage, and Gilda gives him a huge hug of relief when he arrives. Ray changes their plan on the fly: with the shelter no longer safe, they have to get out of there and seek refuge in the forest…again.

Unfortunately, the enemy forces seem to have a good grasp of the shelter’s layout, since they trap them at every turn. The kids are saved by the fact that these guys are supposed to deliver the merch back to the farm, not harm it in any way. It makes me wonder why they’re not using tranq darts, honestly. 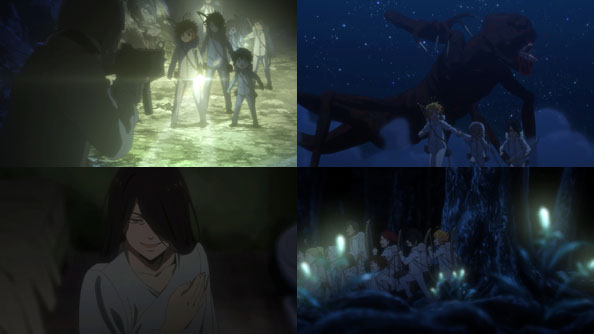 Emma and Ray cover the others as they head to the forest, but again the soldiers are waiting for them. It looks like Game Over, but for the giant wild forest demon bursting out of the trees to kill the soldiers one by one; the muzzle flashes from their guns makes them easy decoys while the kids scatter. But even if they’re all safe for now, they won’t be for long. In the end, shelter might as well have been a mirage!

We learn the farm demons were prepared for this operation to fail, and rather than execute Isabella at once, they’ll leave the matter in her hands as a means of redeeming herself for her failure. If she can successfully retrieve every escaped child, she’ll be granted her freedom and more.

Isabella seems eager to take on the job, claiming that her children “betrayed” her…but that’s just a bit disingenuous considering she was secretly raising them for slaughter. In any case, Mama’s back…and this time, it’s personal. 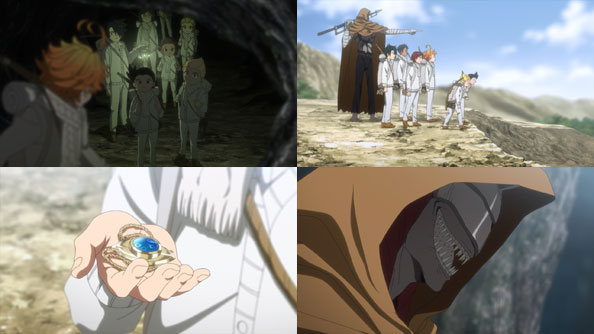 Emma, Ray, and their convoy of kids are ready to leave the safety of Sonju and Mujika’s forest tunnels and head to the location indicated by William Minerva’s pen. They’re trained and prepared to survive and run or defend themselves from the threats that may arise.

Mujika and Emma seem to have formed a genuine friendship, and Mujika gives Emma an ornate amulet as a going-away gift and to protect her. However, we learn from Sonju once the kids are gone that his intentions are less benign. Mujika pointed out that if they had turned the kids in to the farm they’d have been rewarded handsomely. But Sonju has other plans.

Their religion doesn’t forbid him from hunting or eating wild animals, so by letting these kids go, they will eventually breed, creating of a “wild herd” of humans he’ll be able to hunt without forsaking his faith. His face grows especially monstrous as he looks forward to the day he can eat human meat. Yikes! 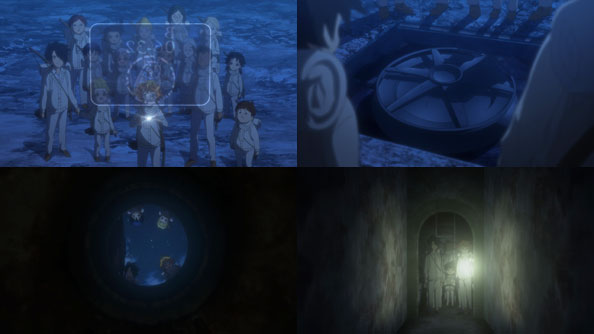 Regardless of his long term plans, the fact is Sonju let this group of kids go and doesn’t intend to eat them. In fact, he rides back to where the farm pursuers are still searching and kills one of their trackers. The kids head out into the wastelands where demons rarely go, but when they reach the location indicated by Minerva’s pen, there’s nothing there.

Fortunately, the fact they’ve arrived at this spot unlocks more information from the pen. Once the password “HISTORY” is inputted, a detailed map displays, and a sliding door in the ground reveals a hidden hatch, Zelda-style. The group descends the ladder and begins to explore the space. Emma eventually finds a switch, and to everyone’s great joy, it works! 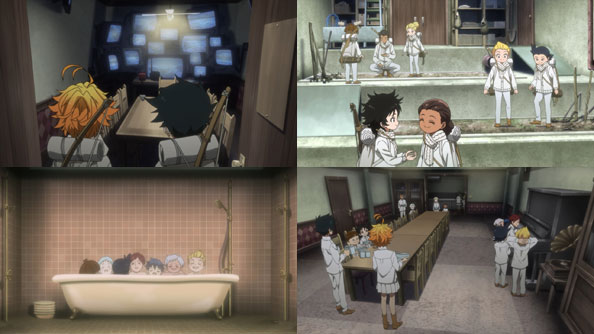 The lights reveal a fully-functional shelter, complete with cooking facilities, a dining hall, a library, a greenhouse with grow lights, a bathroom with hot water, and a security room with cameras on all parts of the surface. There’s even a piano, a radio, and a pantry curiously half-stocked with food.

There’s also a handwritten note from Minerva congratulating them for finding the shelter, which is theirs to use. Emma, Ray, and the kids immediately settle into the new digs, which seem at all times to be an all-too-good-to-be-true gift from heaven above. 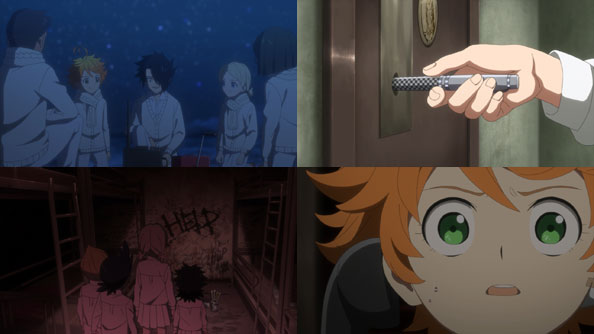 Ray successfully finds the frequency of the 8:00 PM reports from the farms, and will be tuning back in daily to gain intel. Now that they have a shelter and the means of supporting themselves indefinitely, Emma already wants to move on to the next stage of the plan: rescue the remaining family at the farm.

She’s looking ahead even though they haven’t quite finished exploring the shelter. They’ve found all the good rooms, but there are clearly some not-so-good rooms, as initially found by Yvette, the walls of the dorms are strewn with the manic scrawling of people who lived there previously, and were either going mad from boredom or from suffering something more sinister.

Emma uses the pen to unlock a special door that leads to a small room with a payphone, which immediately rings when they enter. She picks up the receiver, and William Minerva is on the other end of the line. Is it a recording, or the man himself? What is the nature of those creepy messages on the dorm walls? Is this shelter really safe, or are those hidden passageways a cause for concern? I can’t help but feel after catching so many breaks since escaping the farm, their streak of good fortune may have run out…