This week’s AL:B takes on a distinct slice-of-life flavor, no better illustrated than Yoshimura Thi Mai napping in the shade of a tree so peacefully, a cat Andou Tasuza was chasing curls up on her belly. The episode tries to draw out the uncertainty of Thi Mai and Tasuza being the two final pieces of Riri’s nine-Lily Legion, but the OP already erased any doubt.

Rather than focus on Riri, Kaede, and Fumi’s attempts to woo Thi and Taz, the episode pivots to Yuyu. She learns by chance when Fumi fires up a vintage tablet that Riri’s birthday is tomorrow. Between the spinning 3D model of Riri and the continued use of name tags for characters, it’s clear AL:B wants to sell some figures, but it was still fun to watch Riri try to run from her AR stats.

Yuyu thinks Riri has given her so much, it’s time to give back, especially on her birthday, but is concerned about giving too random or modest a gift. She talks with everyone but Riri, who has since gotten to know her better, and two facts become clear: that she’ll be happy with any gift Yuyu gives her, and that Riri loves Ramune. Only problem is, the store only sells Ramune candy; Yuyu would prefer to get some of the genuine article.

This leads to Yuyu taking a solitary odyssey to Riri’s hometown the next day. The dialogue-free traveling sequence is gorgeous to behold, and captures both the beauty of the world and, finally, the general peril of ordinary citizens, as Riri’s town is in a constant state of evacuation. Still, there are cold Ramunes for sale at the konbini, and when Yuyu samples one, it’s like learning a little more about her Schild.

Yuyu buys two more and keeps them chilled in a mini-cooler, but when she encounters two thirsty little kids at a station, she gives them both away like the kind and generous Lily she is. Upon returning to the station nearest the academy, she runs into Thi and Tax chasing cats, but can’t very well go lecturing them considering her trip.

Then they notice something glintnig behind some ivy, and discover a hidden Ramune vending machine that was in power-save mode. Now Yuyu can give Riri some Ramune. She might think her whole day-long trip was for nothing, but she ends up clinching Thi and Taz’s decision to join the Legion.

The nine Lilies assemble to celebrate Riri’s birthday, and as expected, she’s elated by Riri’s gift, but amusingly assumes she just went down by the station to buy it, rather than all the way to her hometown. The only other thing Riri wants is, well, Yuyu, and Yuyu offers herself up for a hug, before Yuyu shows how inexperienced she is at hugging back.

With nine members to the Legion and Riri happy on her birthday, Yuyu is flying high that night…until her roommate brings up the fact that the academy is investigating whether Riri’s Rare Skill is “Charisma”, an ability that draws everyone towards her and makes her a natural leader.

This doesn’t sit well with Yuyu, who contemplates whether what she feels for Riri is simply a matter of eating out of Riri’s hand as a result of some power, and not her genuine feelings. With a huge Huge battle coming up, her lingering conflict is sure to be as much a factor as the cohesion of the new Legion.

Not unpredictably, Nisekoi: decides to wrap things up with “Best Girl” Kirisaki Chitoge. The story of the first half  is simple: she loses and then eventually finds her beloved red ribbon. But because the ribbon carries so much sentimental power for her—due to its connection to both her beloved mother and her beloved Raku—that the time she’s separated from it and worried it could be in some dumpster somewhere is a palpable yawning chasm of near-Mr. Despair-like despair. Even Marika is thrown off by how meek and out of sorts her rival is.

No one is more worried/concerned about Chitoge than Raku, however. While her predicament makes it easier for him to see her feminine side (though physically she’s still a beast) and he entertains the notion that things might be better if she just stayed like this, at the end of the day he’s a fan of the status quo, which means a cheerful—if sometimes unreasonable and violent—Chitoge.

So he buys a new ribbon for her. She immediately sniffs it out as a brand-new impostor, but because she’s so distraught, her guard is down and she expresses genuine gratitude for Raku’s kindness.

Then Raku spots the real ribbon atop an electric pole, and the super-athletic Chitoge springs into gear…only to watch in horror as her ribbon catches on the train cable and gets shredded by a train. But at some point in her pursuit, she stopped following the real one and pursued the fake, which is the one that got destroyed. Raku produces the real one, unharmed…or is it?

When she puts it back on she returns mostly to her normal best self, but when she’s back home, we see she’s painstakingly repairing the destroyed ribbon Raku said was the fake new one, but there’s a chance the messed-up one was the real one, and Raku again switched them up to make her feel better. But at this point, she’s happy she has two ribbons, both of which her love Raku gave her at different times in her life. 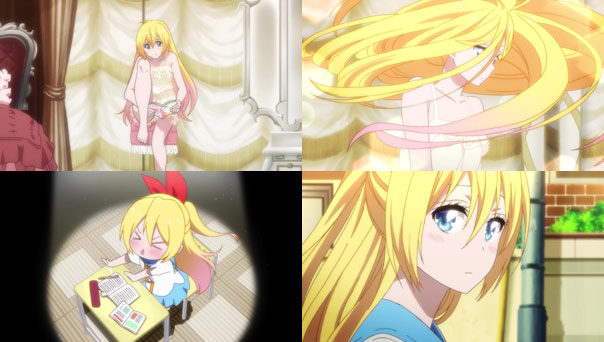 The second part is one of the best kinds of Nisekoi segments: those spent primarily in Chitoge’s head as she struggles with precisely what kind of feelings she has for Raku and if, when, and how to express them to him. It’s clear her heart wants her to confess, but her head overanalyzes and sweats over every detail and eventuality and potential effect of her words or actions, all coalescing into a paralyzing effect; no matter what goes on in her head, Raku can’t see or hear anything but the slightest hints; all to easily misinterpreted or simply not noticed. 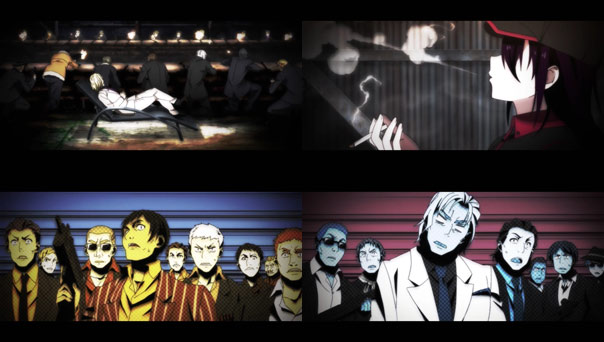 Chitoge seeks advice from her dad, who tells her the outrageous tale of how he met Hana. Back then she was a student juggling 17 jobs to pay her tuition, one of which was pizza delivery girl. She delivered a pizza while Chitoge’s future dad was it the middle of a shootout with a rival organization (well, he wasn’t doing the shooting, but directing from a pool lounger). Seeing Hana so confidently stride into the middle of a warzone…it was love at first sight for pops.

But he goes on to say that wasn’t the case for Hana: he had to suffer multiple embarrassments, rejections, and yes, broken bones before Hana finally fell for him. Chitoge may be right that her parents’ tale of coming together is atypical, but she’s wrong that it doesn’t resemble her own romance with Raku in some fashion. The difference is, Raku still keeps their relationship at an arm’s length due to it’s official “fakeness.”

But he still gets clobbered by Chitoge regularly, and as we saw from the last segment, when she suddenly stops being herself, he not only notices, but worries about her and wants to help. Turns out, the chemistry between her and Raku is so good, the question of how or when to confess to him is more or less resolved by Raku himself.

In talking about how they’ve been fake lovers for more than a year now, reminds Chitoge what she really wants, which is to spend more time with him. And as long as she can do that, there’s no rush to say the words…which is good, because she can barely say them to her stuffed Chitoge gorilla.

The way this episode ended didn’t promise a third season of Nisekoi, but I honestly wouldn’t be surprised. But would I watch it? While hardly any show beats around the bush as stylishly and confidently as Nisekoi, the lack of deal-closing was just as frustrating this season as it was in the first, and the show show no signs of fixing that.

Fortunately, it rarely has to, as its episodic nature lets us focus on and revel in the colorful variety of love interests Raku has to choose from, which makes us forget for just long enough that he’ll never choose any of them.