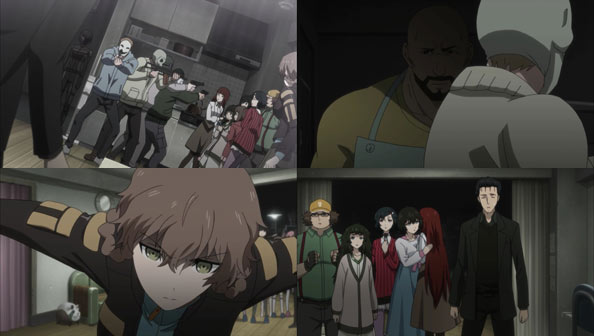 The standoff with what is apparently the “Rounders” of SERN mercifully ends without any tragic deaths, thanks to the sudden arrival of Tennouji, who makes quick work of the masked bandits, while Suzu frees their quarry Kagari from their clutches.

Their leader in black has a female figure, but Okabe almost immediately doubts it was Kiryuu Moeka again because the Akiba boss from the other world line was Braun; it would  make no sense for him to hinder the Rounders here. Something else is clearly up.

The first priority is ensuring Kagari’s safety going forward now that they know she’s particularly susceptible to capture. She continues to stay at Ruka’s place, which Daru fortifies with motion sensors while Suzuha keeps a sleepless watch. 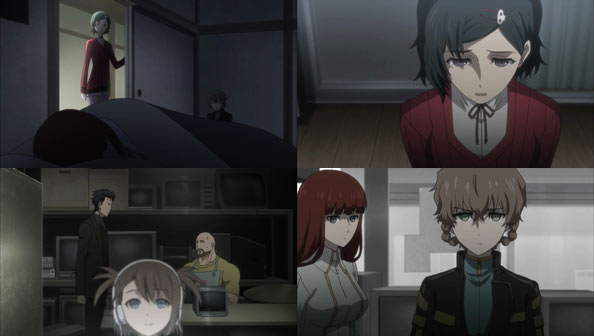 Ruka can tell something’s up, and wants Suzuha to explain why she uses the family-based honorifics she uses…but Suzuha isn’t talking. She (rightly) believes Okabe wants to keep Ruka from learning anything about other worlds, so that he can stay in the one he’s in.

The next day Okabe visits Tennouji at the shop to explain the disturbance he had to break up (not the kind of landlord duties he likes undertaking, even if he’s more than capable). Okabe first confirms that Tennouji is indeed Ferdinand Braun, affiliated with the Rounders.

Braun concedes that Okabe is disturbingly accurate about things he has no business knowing, and in the absence of more credible explanations is willing to at least hear him out about time travel and world lines. He agrees to keep Kagari under his protection, hiring her and Suzuha as part-timers, but insists Okabe get to work discovering the identity and goals of Kagari’s would-be captors. 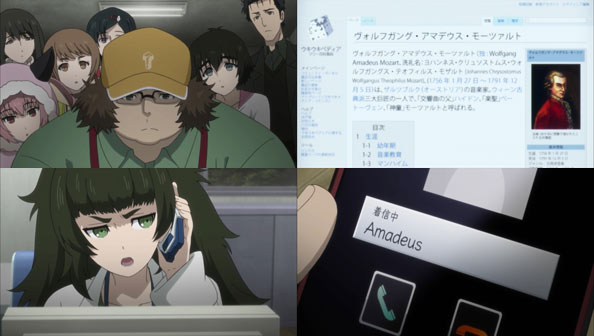 One clue is the alphanumeric code uttered by two of the Rounders: K6205, whom Mayushii’s friend Kaede is able to identify as possibly a Köchel number; those used to catalog the works of Mozart. Specifically, K. 620, his opera The Magic Flute, which is packed with Masonic elements.

Scene 5 of Act 2 involves a man being ordered to marry an elderly woman or he’ll be imprisoned forever. When he does, she’s transformed into a young and beautiful young woman, only for priests to hold him back, warning that he’s not yet worthy of her.

I learned all of this on Wikipedia, as Daru and the others’ primary source of research (always a good place to start, anyways). But one can’t think of the Mozart connection without also thinking about his middle name: Amadeus; ‘loved by God’.

Amadeus is still offline and when Okabe calls Hiyajou, she expresses her fear the server has been taken over. But moments after Hiyajou hangs up Okabe gets a call from Amadeus. It’s highly distorted and garbled, but Amakurisu pleads for help clearly enough. 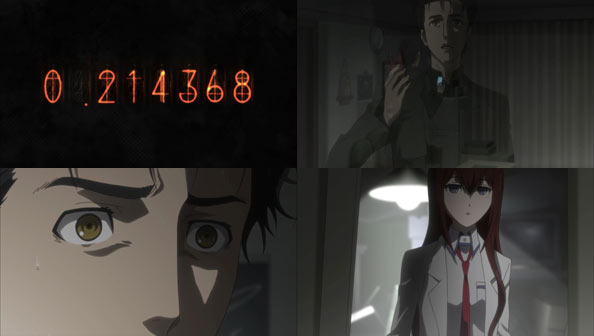 That’s when Okabe enters Reading Steiner, the Divergence Meter’s Nixie Tube numbers flutter furiously. He ends up alone in the lab, the TV no longer shot through, and the Amadeus app gone from his phone’s home screen. It’s a World Line Change, people, and what do you know, Kurisu is alive in this one.

Just like the first Steins;Gate series, S;G 0 started off slow, but there was always the possibility, even probability that one big event after another was bound to go down soon. Now we’re there, with Okabe, in a totally different world than the one in which 0 started, with no knowledge of how he got there, whether he’s been there before, or if he’ll ever get back.

Not to mention the fact that without even trying he’s been reunited with the only woman he’s ever loved. Depending on how things go, he may not even want to leave…but where Steins;Gate is concerned, getting something you want almost always means losing something you need.