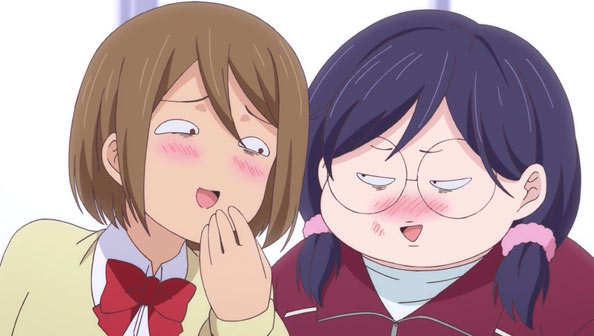 The Gist: Serinuma Kae, a plus-sized fujoshi second-year high schooler, loves to pair off hot guys in her head. When her favorite anime character dies, she inadvertently loses a bunch of weight, becoming a stunning beauty who garners the persistent attention of four guys at her school. On a group date she tries intently to hide her “flaws”, but in the end they accept her for the otaku she is; as long as she’s happy, they’re happy.

Why You Should Watch: While the Ugly Duckling trope is as old as time, WgMD (AKA Kiss Him, Not Me) freshens things up by making said duckling a closet otaku, then building a reverse harem around her, so quickly it makes her head spin.

And yet, as her friend Akane points out, Kae has always had a way with hot guys, even before she lose the weight, because while she can be privately creepy, she’s always been kind. She wants only what’s best for the guys, which she thinks is…each other. 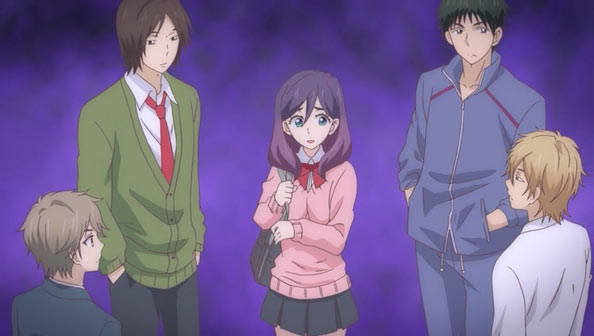 I enjoyed how peripheral the guys were; this is Kae’s show, and they’re in the dark for most of her inner conflicts and conversations with herself. Akane is a solid friend who suddenly finds herself no longer “the hot one” among them (though she already has a boyfriend, so it’s no biggie).

It’s also interesting to see how all four react to Kae compared to how they treated her when she was bigger. In particular, her senpai Mutsumi is the first to immediately recognize her post-transformation. He’d always been more attuned to Kae’s inner beauty and kindness.

Why You Shouldn’t Watch: Stepping back a bit, Kae’s transformation strains credulity, and there don’t seem to be any consequences to, ya know, starving herself. While pre-weight loss Kae is treated relatively well by her peers there’s still the feeling she’s regarded by most as a lovable mascot-like figure. And while society is more or less works this way, it doesn’t exactly look great that these four guys only pursue Kae when she becomes slim and hot.

Those problems aside, this show could definitely just get repetitive, with Kae going through the romantic motions with guy after guy. We’ll see if she can have her otaku otome cake and eat it too. We’ll also see what will happen if (when?) she gains her weight back; after all, Shion can only die once (unless the show brings him back and kills him off again).

Zane’s Verdict: WgMD takes what could have been a mess of trite gimmicks and executes a solid rom-com that’s more than the sum of its parts. Kobayashi Yuu excels at giving Kae a wide range of voices to suit her emotional state, and the guys differ enough in personality to provide some interesting dynamics down the road. It’s far from perfect, but it’s more than watchable, and for now I’m interested to see how things play out for Kae & Co.