Now this is more like it! If last week was slow and talky, even by Mahouka standards, the payoff it set the stage for here made it mostly worth it. Yes, this show still veers more towards “tell” than “show”, but the we got a lot more “show” this week that made the “tell” more palatable, as Tatsuya, Miyuki, Erika, and Leo work as a team to fight off the terrorists, infiltrate the library, and utterly foil their plot.

About that plot: Mibu joined the cause and agreed to assist in it because she thought they were making a stand against magic discrimination. But in the end, she was merely being used by Blanche, which only wanted the magical secrets the library contained. Even her personal sense of long-suffering oppression was a delusion based on a misunderstanding: she believed Watanabe had snubbed her, but refusing to spar with her was meant as a compliment to her sword skills.

This episode gave everyone in the core group something to do (except Mizuki), showing off their unique skills while they’re at it, and proving that Tatsuya isn’t the only one by far getting a short shrift because of their Course 2 status. Miyuki uses her magic for something other than punishing her brother for once, and Erika has a nice heated swordfight with Mibu. Mibu’s good—good enough to make Erika “play for keeps”—but she’s not good enough for that form of Erika, a “daughter of Shiba”.

With Mibu on the mend in the infirmary and the misunderstanding with Watanabe cleared up, there’s nothing left but for Mibu to have a good cry in Tatsuya’s arms. She knows she was wrong, owns up to it, and is encouraged to move forward, knowing know she was always her own worst enemy. But that’s not all we get: Tatsuya proposes a counterattack against Blanche. Miyuki, Erika, and Leo are going with, along with Juumonji and Kirihara. It’s a strong-looking group, and I look forward to watching them in action once again.

I may be a bit buzzed from a rehearsal dinner earlier this evening, but damn, that was one talky episode! I know this series runs 26 episodes, but I feel like episodes like this aren’t the best way of going about setting up conflicts.

Mibu’s anti-discrimination faction finally makes their move, and Tatsuya’s relationship with Mibu pays dividends, as negotiations supersede violence, but the forum itself is a snooze-fest, with President Saegusa doing the lion’s share of the debating. There’s a lot of talking about stuff and not much of anything else.

Even Hana-Kana can’t do much with the material she’s given, and all of the characters fall victim to the plot—a Course 2 uprising aided by Blanche and its associated groups. The school erupts into chaos quite suddenly, but we’re too bored by all the discussion to be that affected by it.

I’m frankly rearing for some action after all this blabbing, something this episode frankly didn’t provide. I’m not saying every episode has to be a full-scale magic battle, but throw me a bone here. With the Shiba siblings headed towards the action, it looks like the next episode might wet my whistle. 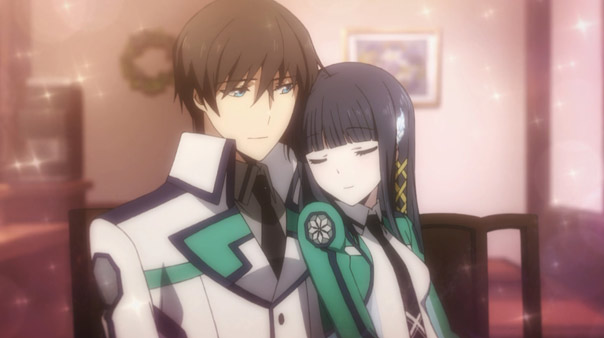 Tatsuya’s actions in the Kendo Club fracas have already earned him a reputation within the school, and when he meets with Mibu Sayaka, rumors swirl about the two. But Tatsuya is far more interested in other rumors, such as those surrounding an element at Magic High being influenced by Blanche, an anti-magic terrorist organization.

When Mibu clarifies that she wants him to join the coalition of anti-magic clubs being organized, it’s as if he’s being courted by the other side. While Tatsuya himself is a victim of the systemic discrimination that led to the the Blooms and Weeds (which not doubt mirrors a similar rift in society outside school), he remains noncommittal, but will be watching Mibu’s actions closely…as others seem to be observing him (that doctor’s visit was pretty foreboding).

Tatsuya’s immersal into all this thick political soup started with his breaking up of the Kendo club brawl without the use of magic, or at least a type of magic generally used. This has been a pretty talky show from the start, but aside from one brief scene of a failed accosting, Tatsuya essentially walks from room to room having discussions the whole episode. 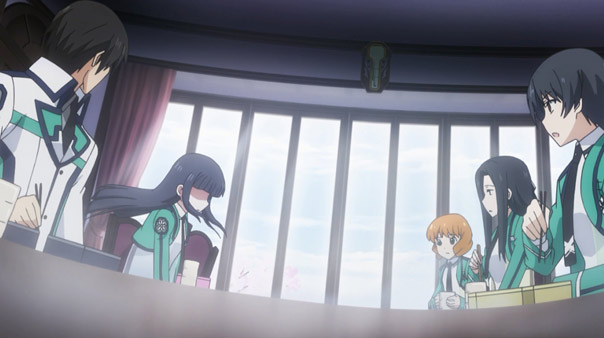 As a result, the episode on the whole, while attempting to build up intrigue, comes off as a bit of a chore: divulging all this info is necessary for later payoffs, but nothing particularly interesting happened here. During some of these scenes Miyuki demonstrates her fierce loyalty to and affection for her brother, as well as her intense jealousy at the mere mention of him getting friendly with another female, which sets off her “Ice Mode.” 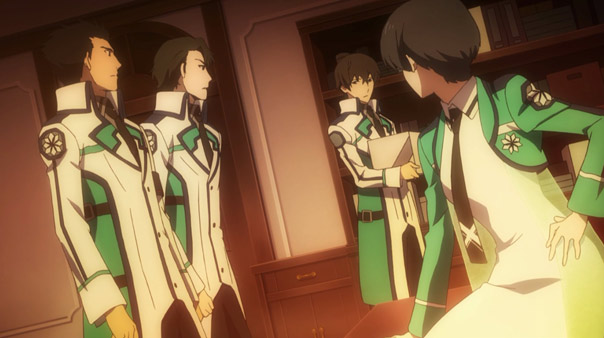 After being swiftly, decisively taken down a couple of pegs by the first-year Course 2 student, all Hattori can do is apologize to Miyuki and walk out quietly, but not before remarking that the tests that determine who’s a bloom and who’s a weed don’t relfect Tatsuya’s skills. In fact, those tests have a tremendous blind spot, where Tatsuya lives and thrives. 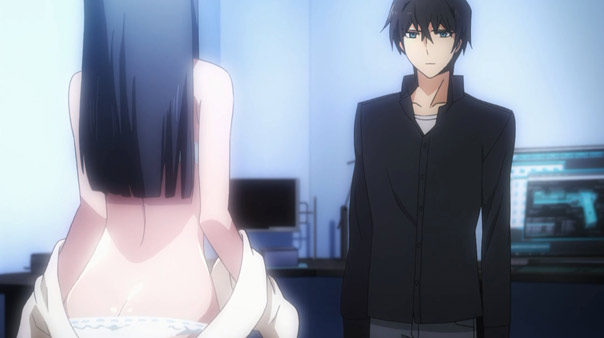 The analysis of the fight between the witnesses assembled got into fairly technical territory, but everyone was impressed enough—and the terms were intuitive enough—to conclude that Tatsuya uses magic like no one else they’ve seen, combining it with Kokonoe’s intensive ninjutsu training. As everyone marvels at the ingenuity and resourcefulness, Miyuki merely smiles with pride; she already knows what he’s capable of. (Later, she can’t help but show herself off to Tatsuya, and his auto-heal gambit is a neat twist on the Jealous-Sis Attack.)

After this week, the rest of the school will know too, very soon. Watanabe admits she’s grown weary of the rift between blooms and weeds (and the terms themselves), and sees Tatsuya not possessing the ideal skillset and disposition valuable disciplinary officer, but as a living, breathing, ass-kicking symbol of the fallacy of the current status quo. She puts him to work immediately, patrolling the maelstrom that is club recruitment week.

Tatsuya takes to his new duties like a duck to water, wasting no time swooping in to save Erika from a grabby mob. She inadvertantly rewards him with a peek at her cleavage, but forgives him when he accompanies her to the kendo club. She decries the sport as dull and staged; he posits that they can’t be anything else since true martial arts battles consist of two people killing each other.

And that right there is Tatsuya in a nutshell. The blooms perform flashy “exhibitions geared for publicity” that dazzle bystanders and earn them top marks, fancy badges, and the superiority kick that comes with them. Meanwhile, Tatsuya quietly, calmly works in the shadows, assessing; not showing anyone his hand until it’s too late for them, as it is for the kendo members who try to impede Tatsuya’s duties.

Vice President Hattori is neither grateful nor impressed with Tatsuya’s neat little bit of diplomacy, but Tatsuya earned the gratitude of two other Blooms, as well as the attention of Disciplinary Committee Chairman Watanabe Mari. By the end of this episode, both the positive and negative ramifications would play in his favor.

When President Saegusa Mayumi offers Miyuki a spot on the student council, its another opportunity for Miyuki to demonstrate her fierce and unwavering loyalty to her brother by begging them to somehow bring him aboard too. But they can’t, because he’s a Course 2 student. That’s when Mari comes in, offering him a position on the disciplinary committee. When he hears of this, Hattori bristles, believing a lowly weed would be in over his head.

One thing I’m enjoying about how consistently the characters’ traits are portrayed; whether it’s Tatsuya’s calmness, Miyuki’s loyalty, Saegusa’s amity, Mari’s open-mindedness…or Hattori’s haughty assholishness. He’s the kind of snobbish creep you love to hate, and while he’s outnumbered this week, he still brings the hate strong and fast, spitting on weeds like Course 2 and glibly accusing Miyuki of nepotism.

Miyuki knows aspects of her bro neither we nor Hattori know, that the established practical tests couldn’t detect (hence his low scores), and which Mari caught a tantalizing glimpse of. So if Miyuki says he’ll win against anyone, she may well be speaking the truth, unclouded by affection. This is confirmed when Hattori is soundly beaten in a simulated battle.

Hattori may be a powerful magician capable of acing the same practical tests where Tatsuya struggled, but in an actual fight, he put himself at a disadvantage by assuming Tatsuya would simply go down exactly as he envisioned in his head, ignorant to his skills. Now Tatsuya will be the first weed with the power to discipline blooms. The times are changing, but I don’t see Hattori and his ilk blithely falling in line.

It’s 2095, the world map has been redrawn and three billion people died in WWIII, and yes, people are still classist dicks to each other! Hooray! At the National Magic University Affiliated First High School—a suspiciously fancy and hoity-toity facility considering the world blew the shit up not too long ago—administrators decided to split the classes into elite “blooms” and lowly “weeds”, giving the former fancier insignia to go along with their inflated sense of superiority.

It seems like a pretty silly idea as opposed to, oh I don’t know, just having separate schools for the two courses…but whaevs. Brideing the Blooms and the Weeds are the Shiba siblings Tatsuya and Miyuki, who are often mistaken for twins because they’re so close—both in age and intimacy. Seriously, no Oreimo-style tsundereness on display here; Miyuki is super-caring, affectionate, dutiful sister who greatly admires her big bro and doesn’t like it when he’s slighted by family or enrolled as a reserve. They may be too close, but if Tetsuya minds, he doesn’t let on. Their quasi-romantic behavior is played up for mild laughter throughout.

I’m not going to lie: not a whole lot happened this week aside from the show laying out the world’s history, introducing the cast, demonstrating how magic works (it’s a man-made technology here) and setting up future alliances and conflicts. But I also can’t really pick out any glaring flaws; the execution was very polished, with even wide shots of masses of students fully drawn and colored. Ishida Kana did a great job with Aquarion Evol’s female characters, and I’m digging his character designs and classy uniforms here as well, esp. the way the girls’ skirts bear different patterns based on their magical focus.

There’s also a nice low-key futuristic quality to Iwasaki Taku’s subtle score. I see promise in Miyuki being torn betweeen the two classes, the triangle between Tatsuya, Miyuki, and perhaps Shibata, as well as the playful aggression between Erika and Leo. And Tatsuya’s way of equitably diffusing the fight at the end with his analytical adeptness shows he’s not just a punch-and-kick kinda protagonist. Oh, and hey, nobody’s trying to assassinate anyone!