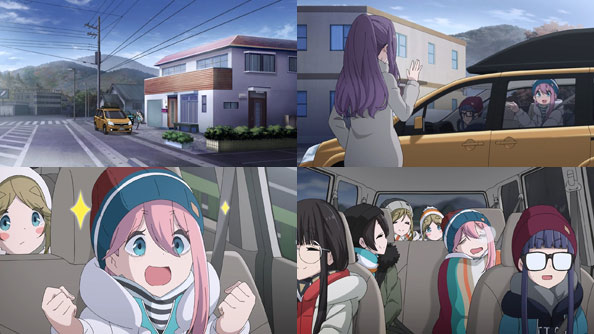 The OP to Yuru Camp’s second season is a vast improvement over the first, but there was one thing that always bugged me: a Nissan MPV was featured instead of Toba-sensei’s adorable Suzuki Hustler. Turns out the car in the OP is Toba-sensei’s sister’s van, a first-gen Nissan Lafesta.

With that mystery solved, there’s immediately a new one when Toba-sensei picks up Nadeshiko in the morning: What’s with the bags under her eyes? This is solved before the OP: she was simply too excited for their trip and couldn’t sleep a wink. So she sleeps in the van. The Whole. Damn. Time. 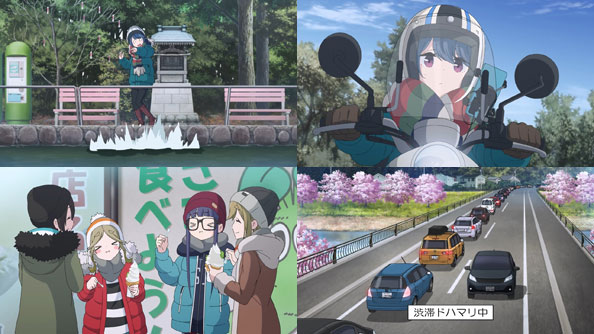 Rin, who set off hours earlier, is already checking out Cape Ose, Izu’s “geospots”, unique geological features along the way, visits to all of which she and the others hope to collect like Pokémon. She encounters some very hungry fish, a giant shrimp, and a thrillingly windy mountain road. 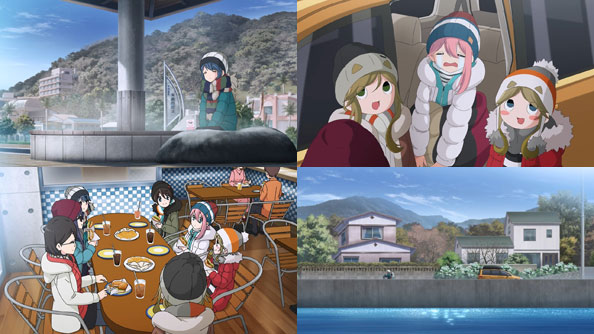 Rin’s wanderings take her to the Ryugukutsu Cave, which has a skylight due to erosion and for me called to mind the Hidden Beach in western Mexico. From there, she arrives in Shimoda, rests her road-weary dogs in a hot spring foot bath, and admires the torii by the water.

The van gang is delayed by choking traffic caused by the cherry blossom festival in Kawazu, home of some of the earliest-blooming sakura. Aoi’s sister Akari gets out to use the restroom but comes back with local treats. Eventually they meet up with Rin in a Shimoda parking lot, and a panicked Nadeshiko asks her where they are and what day it is, having been throughly messed with by Aoi and Akari, the “Lying Sisters.”

After a lunch of fried alfonsino burgers with Camembert cheese and sweet-and-spicy sauce (goddamn that sounds good), the van gang and Rin form a two-vehicle convoy to the grocery store where Nadeshiko stocks up on more alfonsino for the first night’s dinner. 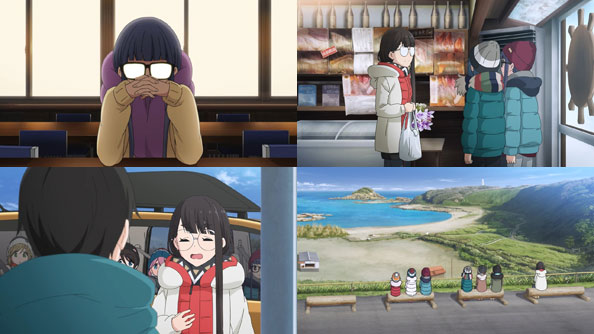 It is here where we learn that Chiaki, Ena, and Rin are responsible for dinner on the second night. Not to be upstaged by Nadeshiko, Chiaki had convened with the other two back at school before the trip Gendo Ikari-style to organize Operation Shrimp.

The gist is, they’ll make Toba-sensei give up drinking and use her booze money to buy some of the spiny lobster Shimoda is known for. Ena dispenses with the subterfuge and simply requests Toba-sensei buy some spiny lobsters, and she does.

The convoy continues on to Cape Tsumeki, where Toba-sensei learns that despite the city saying they could camp along the coast in the winter, the landowner no longer allows it as of a few years ago. It’s a setback, but it doesn’t stop the gang from visiting a lighthouse and checking out the rad columnar jointing at Tawaraiso Beach. 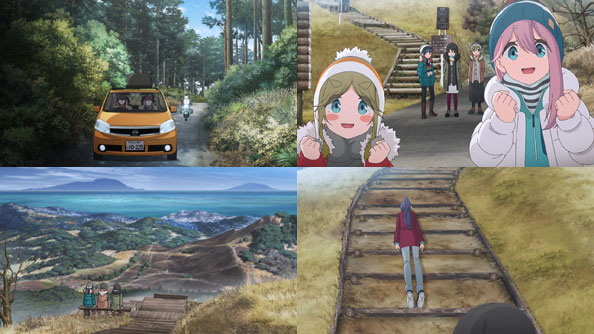 Ena, proving to be the X-factor of the group, suggests they contact the Iidas, who saved them at Lake Yamanaka. Sure enough, they know someone who owns a campground and has arranged a place for them. It’s a 43km detour that throws some of the later parts of their itinerary out of whack, but Rin puts them back in whack with her Mad Map Skillz.

Their updated route sends them to explore the next geospot, Hosono Plateau, before continuing to the campground in Nishiizu. There’s a mini mountain peak to climb, and Akari challenges Nadeshiko to a race in which Chiaki unwisely decides to participate. Despite having built up strength in her legs from her liquor store job, Rin, Ena, and Aoi find her planking on the steps nowhere near the top.

This episode feels worlds away from where the previous one ended, with Rin and her grandfather on a magical early morning ride. But there’s a different kind of magic at work here, one of overflowing excitement and anticipation as we dart breathlessly from spot to spot with the seven travelers, who divide mingle in fascinating new ways. As always, the journey to the campsite, with all its sights, sounds, smells, and tastes, proves just as meaningful as the destination.