Kotarou and Akane are officially dating now…but neither are quite sure what dating entails. They’re also keeping it a secret from their respective circles of friends, so they’re still not comfortable talking to each other at school, which gets old for them fast.

They need guidance on how to proceed, and both end up relying on a combination of advice from their elders (Kotarou’s senpai Daisuke and Akane’s big sis Ayane) and the interwebs. The next time they message each other, they’re on the same page about meeting up in the libarary, but the rendezvous is broken up by Chinatsu, who is clearly taking a shine to “Curly-kun.”

Akane is understandably upset, and this results in both her and Kotarou ending up with the wrong person at the wrong time: Akane with Hira-kun after track, and Kotarou with Chinatsu after cram school. It also doesn’t help that due in no small part to the emotional weight of their relationship, Kotarou is doing worse with his academics while Akane is slipping in athletics.

No matter: they want to meet, and Kotarou finds a way, as Daisuke lets him use his shop as a meeting place where they won’t be bothered by classmates (who are always portrayed as an irritant, heightened by the couple’s desire to simply be alone together).

Here, they do indeed finally get to be alone together, and revel in it, clearing the air, and even holding hands. But the bliss is all too brief; interrupted once more by an outside force: a text from Chinatsu to Akane announcing she may have a crush on Kotarou. This isn’t an out-of-nowhere twist for twists’ sake, because we’ve seen firsthand the easy chemistry of Chinatsu and Kotarou.

As Kotarou’s favorite writer says, humans are the only creatures who harbor secrets, and it’s a double-edged sword. Their secret relationship is exciting, but neglecting to tell Chinatsu before means that telling her now will end up stinging that much more. Hang in there, guys!

There’s a reason I watched and reviewed this before Saekano: At the moment, I’m simply more engaged and invested in Kotarou and Akane figuring out how to date than Tomoya & Co.’s amorphous dating sim struggles. It’s a straightforward narrative with a reliably steady progression and an appealing aesthetic (which would more appealing still if the CG NPCs were a little less zombie-like in their movements). It ain’t flashy, but it’s solid.

It’s the School Trip episode, and there’s a sense of adventure to the proceedings, as the whole amassed class boards the Shinkansen and arrives in a bustling Kyoto. It’s just the start of a dense, lush, richly-detailed episode that nevertheless has a light touch due to the elegant plot.

You see, amidst this big trip, all Kotarou really wants is to know Akane’s answer to whether she’ll go out with him; the sooner the better. Because cell phones are officially forbidden, he has to hide his and hope it’s not confiscated; otherwise he’s doomed.

And I’m not kidding when I say Kyoto is bustling; the scenes of throngs of tourists milling around are pretty impressive, even if the CGI models are a little stiff, it’s better than panning stills; not to mention the accurate-to-Kyoto environs look great.

The fact that Kotarou and Akane have to contend not only with their nosy classmates, but also the vast space and volume of humanity Kyoto throws at them, really heightens the tension. Will they be able to meet on this trip? 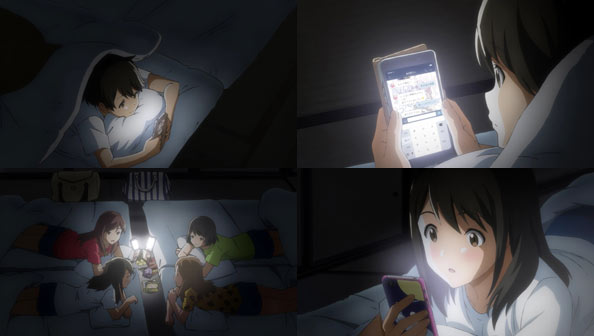 C’mon, haven’t we all been there at some point: staring at our phone, the only light in the room at night, willing that next text to come in from the person you like? Even if you haven’t, the tension is thick enough to cut through with a knife.

The show does an excellent job thrusting us into the shoes of both Kotarou and Akane, making their various friends, nice that they are, feel like hovering irritants. They want to reach out to each other, but they’re mired in their respective circles.

Kotarou finally gathers the courage to send Akane a place and a time to meet…only for his phone to be confiscated by a (drunk) teacher at the worst possible time.

From there, it’s a textbook “missed/lost connection” scenario, as Akane sent a text asking Kotarou to elaborate on what he meant by the time and place…and she waits and waits, to no avail. So much must fly through her head: did he lose his phone, or is he intentionally ignoring her replies?

The beauty of this particular situation is that it simply unfolds before us without undue explanation, exposition, and precious little inner dialogue, really giving the increasingly awful-feeling situation room to breathe without undue verbal interference. 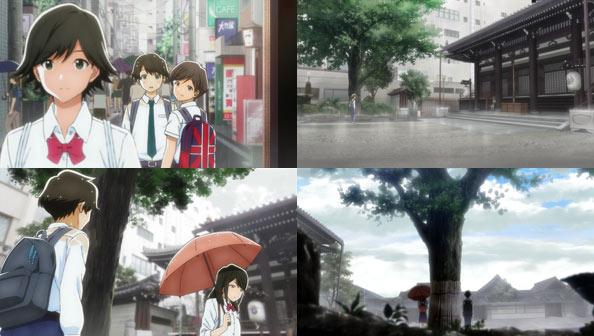 Kotarou has to muster courage once more, in order to borrow Chinatsu’s phone to call Akane. And Akane is rightly pissed, though neither she nor Kotarou should place so much hope in the reliability of cell phones. That’ll lead them to ruin!

All’s well that ends well, thankfully, and the tension is released when, after voicing her frustration with her ordeal and with their inability to clearly communicate thus far, Akane is the one who musters the courage to say something: that she wants to talk with Kotarou more.

That’s her answer, all but eliminating the ambiguity her fortune said would lead to calamity. Sure enough, the pouring rain ceases and the clouds part to reveal the beautiful blue sky. Now let’s hope these two crazy kids didn’t catch colds!

I said last week that Akane and Kotarou aren’t in a hurry, but I guess I have to take that back now. Between all the pairing off going on in the run-up to the class trip, and the fact that at some point everyone will be heading off to various high schools, the two can’t sit on their hands forever. That being said, neither has any experience with courtship, so much of their nascent relationship is sustained through the messenger app LINE, as they remain painfully unable to talk to one another in school.

They also have a lot going on, what with Kotarou’s literature club and local festival activities and Akane’s track meet. This eats up the time they could be spending hanging out. Akane’s track buddy Nishio (who tended Kotarou’s wounds) considers him a friend now, and she’s serious about surpassing Akane, at least in track. Akane, meanwhile gets perilously close to being asked out by Hira; it’s only a random exclamation from a nearby party that makes him think better of it.

Kotarou can’t attend Akane’s meet due to his drumming practice, and the show really excels both at capturing the tension involved in waiting for someone you like to text you, and showing just how torturous it can be to have to carry on with your plans that don’t include that person.

Fortunately, fate smiles upon the couple, or rather, volition does. Kotarou isn’t in a hurry to leave the shrine, while Akane, whose phone died, decides to check out said shrine on the off-chance Kotarou is still there. He is, and they have a lovely, if at times understandably awkward, encounter under the beautiful moon.

And feeling both the pressure of time and the auspiciousness of another meeting with the lovely, warm, kind Akane, Kotarou manages to finally ask her out—not with Line, but with words. Not with chance, but with choice. Naturally, we don’t hear her reply, but their once tentative dynamic has already entered a new phase.