When the show cut from three schoolgirls running through an Indiana Jones-style treasure dungeon to a sardonic Kyon wannabe arriving at the umpteenth “academy city on an island,” I’ll admit I let out a bit of a groan. But when Yama Juugo moves triumphantly into his first apartment and finds the ghost of one of the island’s seven elite founders, things started to look up. 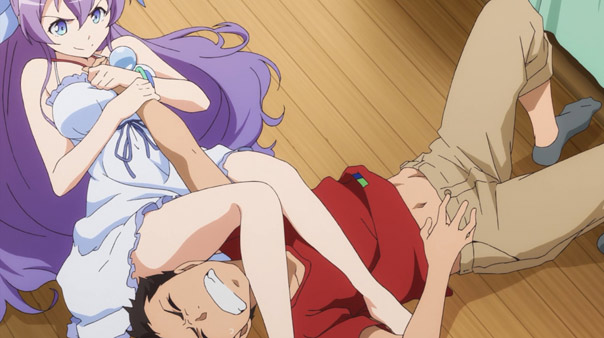 The ghost, the titular Ryuugajou Nanana, is a purple-haired girl voiced by Tanabe Rui right on the heels of another purple-haired girl voiced by Tanabe Rui I just finished watching. That’s okay, her innocent yet forthright voice is a good match so far. Nanana spends her days playing video games and eating pudding in the room she’s been bound to ever since she was stabbed ten years ago. 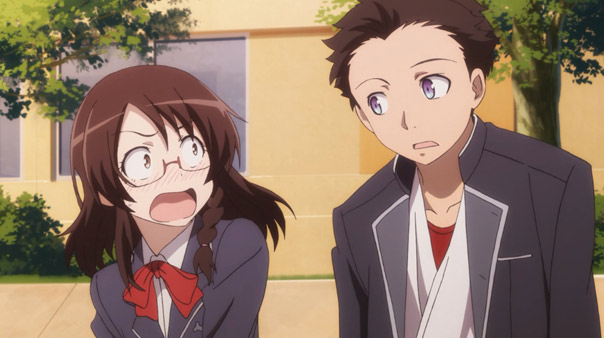 Anoher member of the “Great 7” and a fiend of Nanana’s happens to be Juugo’s landlady; and in addition to not letting a haunted apartment go to waste, she’s glad Nanana will have a young lad to keep her company. Juugo’s sympathy, as well as the not-unattractive ghost’s promise to play his live-in girlfriend, compels him to agree to help solve the mystery of her premature demise. 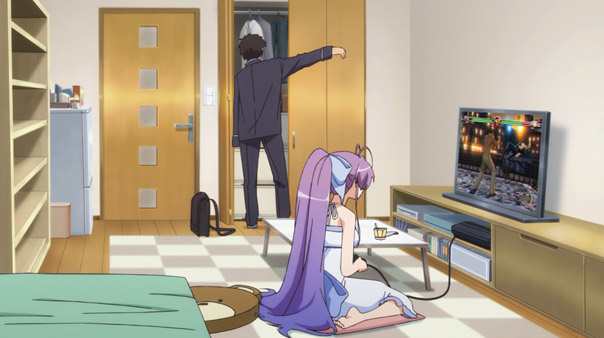 There’s also the little matter of much of her vast treasure of unknown billions of yen being hidden somewhere on the island, of which the broke, ramen-scarfing Juugo would certainly not mind a share. But whether it’s for money, love, compassion, or all of the above, there’s a lot laid out for Juugo to accomplish while he’s not attending high school. I’ve been itching for a nice breezy ghost story, and so far this hits the spot.

Switch repairs a mysterious game system for Yamanobe, who lets them play the ultimate video game, “Special Mariko Broken.” At first it’s a derivative, confounding, random mess, but after four hours, the Sket-dan are utterly enraptured, and end up beating the game. But as the ending runs, they forget the system malfunctions after four hours. It explodes and burns up, leaving them empty inside.

First he tackled athletics with “Genesis.” Then board games with “Hyperion.” This week, everyone’s favorite eccentric Yamanobe returns, and this time he’s taking on video games. And boy howdy does this episode parody video games within an inch of their lives. It touches on just about everything, from hand-writen cartridge labels and blowing into the games (we still do that!) to downright weird stuff like a controller with buttons A-U, no down, and a uirou dispenser. We had to look that one up.

But while the game is initially a Super Mario Bros. ripoff, it makes numerous leaps and bounds in graphical quality and represents a whole multitude of games, from sidescrollers to RPGs and visual novels. And it’s all tremendously entertaining, because like Yamanobe’s other games, you just don’t know what’s coming next. The post-credit clip-show was pretty shameless, but at least there were a couple fake scenes – they should have done more.