As expected, the final Hibike! Euphonium 2 of the season is an epilogue; it even has ‘epilogue’ in the episode title. The third years are given a proper sendoff with lovely musical performances accompanied by montages of both this season and the last.

Yoko and Natsuki take up the mantle of new president and vice president, and the former can hear the loss of the third years.

So can Taki-sensei, who acknowledges that every year school bands essentially take a big step back due to the outgoing talent. That experience must be replaced with the remaining members plus the rawer talent of incoming first years.

The same band that made it to the Nationals no longer exists. The one that intends to make it back will be an entirely new one: new leadership, new composition, new style.

Since Kumiko and Reina are first-years, they have not one but two more years to achieve their goal of National Gold. And they seem as optimistic and determined as ever to get there, despite their bronze finish this year and the loss of so much talent.

Their problems going forward are the same problems all school bands face, and secondary problems — such as Yoko and Natsuki clashing — are sure to crop up. 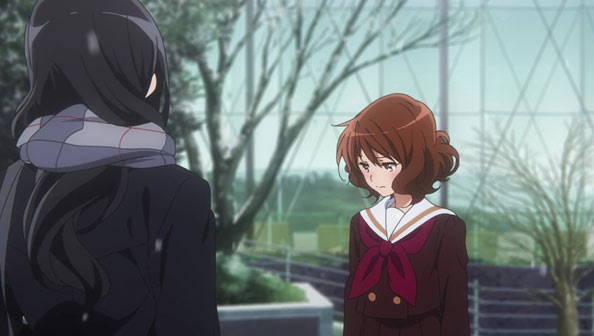 The key (no pun intended), I suppose, is to avoid really big dustups such as the ones that took place before Kumiko and Reina arrived at Kitauji; the kind of conflicts that actually hindered the band’s performance, and the wounds of which have now all but faded.

And so we get a nice, long, heartfelt goodbye as all the seniors play for their juniors, then vice versa. There’s a commencement ceremony, where the goodbye hugs and wishes continue. And throughout this epilogue, Kumiko is sad and upset, all because Asuka is leaving.

She runs all over the school grounds, increasingly desperate to find her. As usual, Asuka is trying to avoid “these kind of things”, but Kumiko won’t let her escape her, or her true feelings. Kumiko thinks she might have hated Asuka at first – but now all she feels is love. Romantic love? Perhaps it hews close to that, just as you could read her feelings towards Reina on top of that mountain last season.

But whatever specific kind of love it is, she’s got it, when she didn’t have it before. Asuka is someone she let into her life and personality, while continuing to hold back from Shuu (poor Shuu). Asuka is someone leaving, whom she doesn’t want to go. She has eyes for no third-year but Asuka.

And now she’s the chief euph, and her bandmates even remark how she sounds like Asuka. Like Mamiko, Asuka has helped shape and progress Kumiko’s musical development and identity. I’m unsure if there will be a Euph 3, but there’s plenty of great material to continue with. 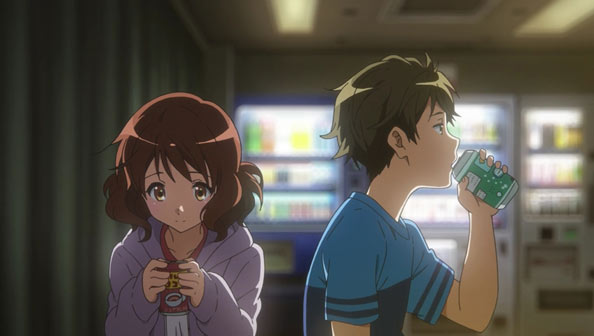 Shuu Sighting! Shuu Sighting! Kumiko and Shuu can’t sleep the night before the Nationals, and end up having drinks together by the vending machine. As always, they talk about mundane things. Shuu gives Kumiko a belated birthday present: a cute hairpin. Scene.

It’s these two in a nutshell. Here, in the middle of the night, the two are able to at least have a moment. It’s not a bit dramatic moment or anything, just a cordial acknowledgement of their history together, without any kind of indication either one of them know what to do from there. Sometimes I think the show revels in always teasing these two. 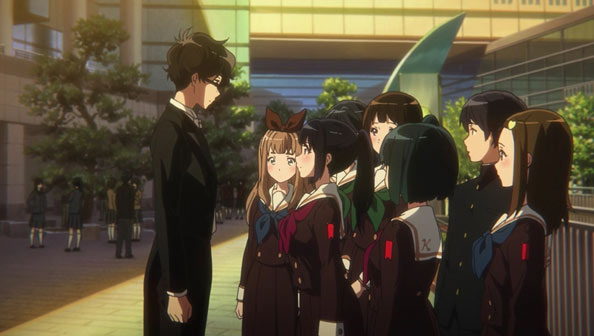 Oh yeah, the Nationals! Kitauji fails to win Gold. They fail to win Silver, too. They end up with Bronze. Bronze, after all that! I guess they aimed too high, huh? Ah well, like the band, I had carried unreasonably high expectations, and while it stings to seem them essentially crash and burn, they didn’t do badly for a group so young, and the second and first years aren’t out of opportunities. Just getting to the Nationals was a goal they successfully achieved, and that’s nothing to sniff at.

When Taki-sensei is awarded on stage, the band doesn’t have a cheer arranged. Enter Reina, who yells out “I LOVE YOU!”, which Taki and everyone else hears, but not necessarily as a confession. Later, when Taki thanks Reina and expresses his worry no one in the band liked him, she piles on the praise, then makes it clear she “really does like him” – to which Taki is flattered, and walks away without a formal response. Hang in there, Reina! 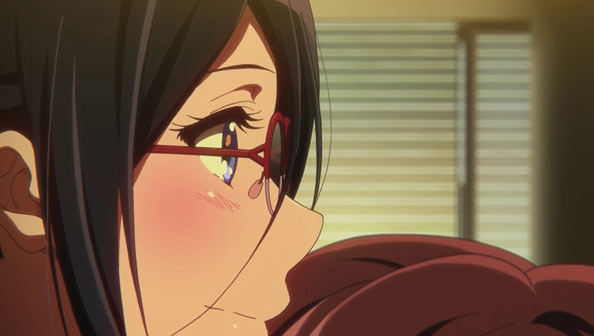 In better news, Asuka’s father, and judge in the competition, heard her, and through Taki-sensei, compliments her play as “beautiful” and is glad she kept at it. Frankly, I’m not sure why he couldn’t tell his daughter in person, but it seems to be enough for Asuka, who has to embrace Kumiko before completely breaking down with happiness. 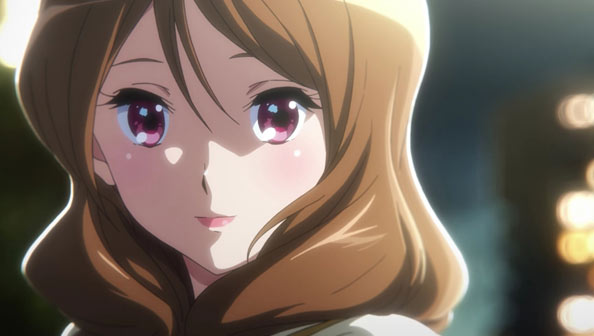 And finally, after a lot of looking around and chasing, Kumiko tracks down Mamiko, who did attend after all, to tell her she loves the Euph and loves concert band because of her, and she loves her. Mamiko yells back that she loves her too, and that’s the ep.

It was a bit odd not to hear any music, but it was always going to be hard to replicate the atmosphere of previous performances without seeming repetitive. Similarly, the Nationals didn’t feel any more “special” than the Regionals this time or last. It ends up being kind of a bronze episode (if a 9 is Silver and a 10 is Gold).

It felt more like an episode full of loose ends being tied up. That made for some enjoyable moments, but they felt isolated and disjointed. Still, the feels were felt on numerous occasions; oddly enough no more so than when Mizore fist-bumped Kumiko and looked so pleased about it. 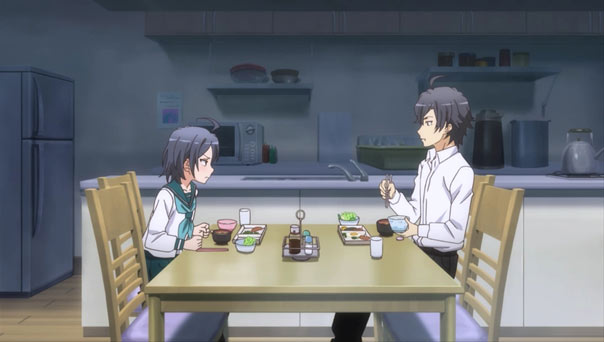 This was a pretty dark and depressing episode, one I thought I’d respect more than outright like, due to its necessity: it’s always darkest before the dawn. But I ended up liking it anyway. Having created a rift with Yukino and Yui, Hikky ends up further exploring his predicament through other women from both past, present, and future: apropos for Oregairu’s own Scrooge. 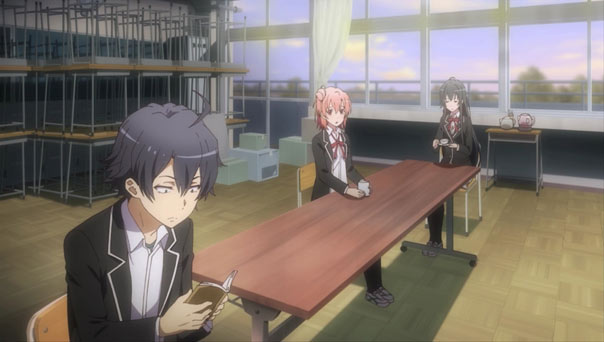 Is it just me, or does he look way further away than when he and the girls were on better terms? Just as he refused to tell his concerned sister anything, that everything is normal, after downing an extra-bitter can of Georgia Extra Mountain Blend Black coffee, he walks back into the club after school like nothing’s the matter. But something is the matter, and nobody’s buying his feigned apathy anymore. 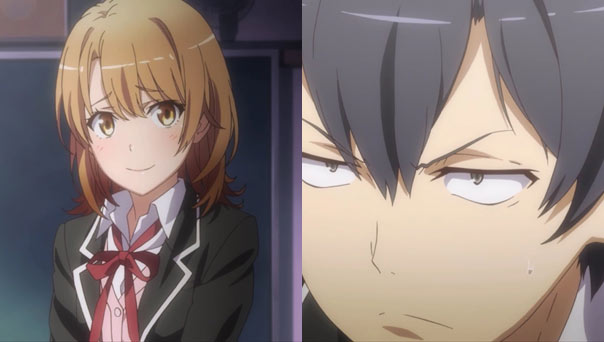 Fortune seems to favor Hikky and his desire to slip back into normalcy when Shizuka brings them their latest client, Isshiki Iroha, who has been nominated to run unopposed in the student council president, but wants to lose. Only Isshiki is the kind of girl who juggles guys and makes enemies of the girls. He immediately tears down her kind in his mind, believing he knows everything he needs to about her without actually knowing her. 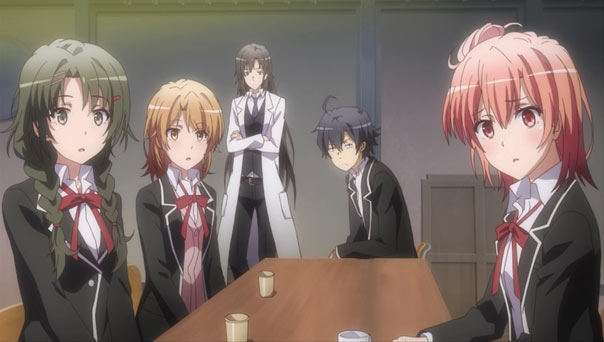 Interestingly, but not surprisingly, it’s Yukino who is unable to keep things professional. When Hikky suggests another superficial easy-way-out plan (something involving a sacrificial campaign speech that will erode Isshiki’s cred), Yukino rejects it, and makes this about more than just Isshiki’s job.

Yukino walked away quickly after Hikky’s false confession to Hina with good reason: she can’t be around Hikky too long right now without losing her cool. That just speaks to how much she cares about him, but also to the depth of their impasse. Yukino isn’t just disappointed in Hikky; she’s wondering if she ever really knew him. 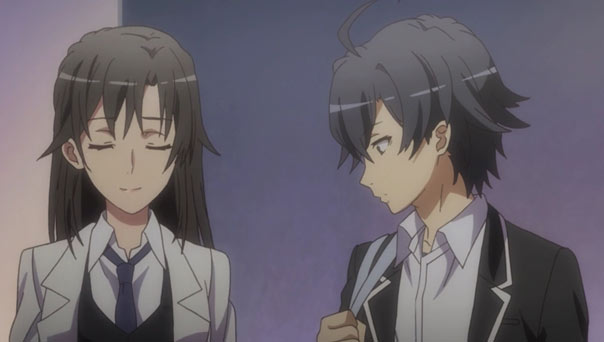 Shizuka seems to understand, especially when put on the spot to reveal the current “standings”, as the three agreed a while back that the winner could order the loser around however they want. Yukino probably hoped she could order Hikky to stop his nonsense, but Shizuka points out not only that it’s a dead heat depending on the measure, but that Hikky, Yukino, and Yui are all but impossible to evaluate independently, as they depend so much on each others’ contributions.

Even in its darkest hour when the service club threatens to tear itself apart, Shizuka makes sure to point out that the club really has worked, and no matter what evil stares Hikky gets or gives, the work he’s done has proven to her he’s a good person. He just needs to come to terms with that himself.

After Yukino again tells him off for his hypocrisy over the superficial confession, Hikky retreats from the clubroom entirely. He looks over superficial flicks to take his mind off things, but eventually finds shelter in a “Master Donut”, peddler of sweet-looking but ultimately superficial confections, that if not consumed in moderation, can also be detrimental to one’s health.

There, he finds Haruno, who like Komachi lends an open ear but doesn’t get much, while she tells him Yukino may hate her family, but she doesn’t want them to hate her, so she goes through motions like mailing them gifts from her school trip. 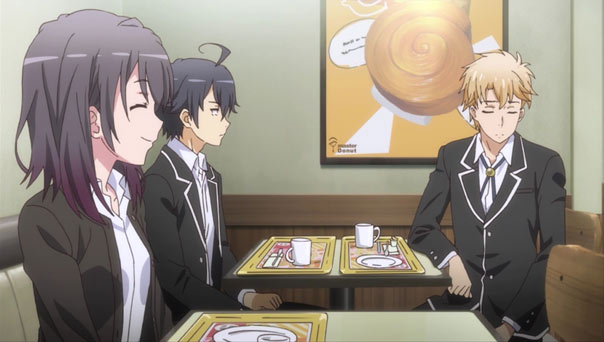 Hikky also encounters Orimoto Kaori, a girl he liked in middle school who rejected him. Like Haruno, Orimoto acts like a with-it grown-up, recalling those days with fondness before happily saying none of that middle school stuff mattered because it was ages ago. Yet it’s as clear as yesterday in Hikky’s mind. Orimoto scarred him, and helped turn him on the path of avoiding contact out of fear of rejection. What’s even more biting is that she’s clearly moved on, having no idea how much torment she caused Hikky back then. Hikky’s quick assessment of her is one-sided and unfair to Orimoto, but it fits his self-destructive narrative of being beyond “this kind of girl.”

Haruno brings Hayama into the mix so Orimoto’s friend can meet him, but Hayama is really there to tell Hikky how Haruno only ever kills people she likes (like Hikky) with too much attention or crushes those she doesn’t like, without much middle ground. We shouldn’t be surprised then, that when Hikky spots her, she’s all alone in that donut shop. 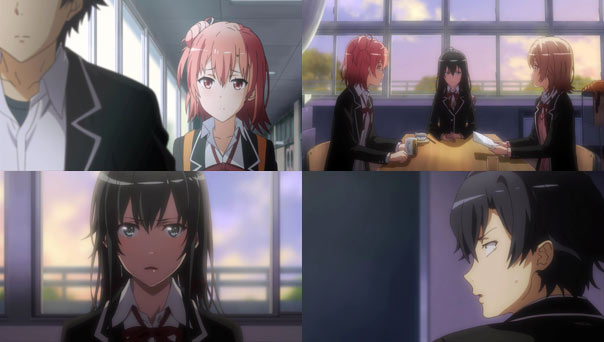 Yui the mediator gets Hikky back in the club, to at least listen as they discuss what to do about Isshiki’s election, but this latest attempt to reconstruct normalcy from the shattered shards of last week goes nowhere. Yukino admonishes him again for avoiding the real problem and taking reckless easy ways out, both with Hina and here. As long as Hikky remains stubbornly taciturn and haplessly defending methods even he isn’t sure are right, there will be no rapprochement. 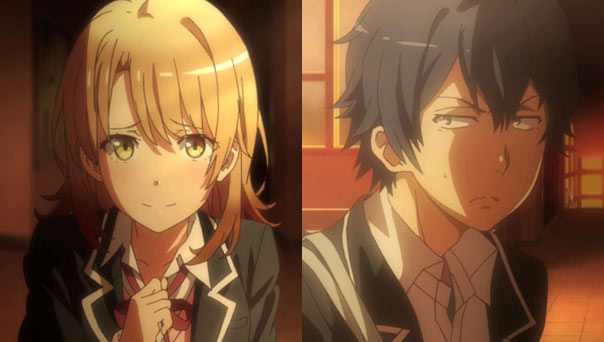 As Isshiki Iroha thanks Hikky for his help in her subtly manipulative “boy-juggler” way (as Hikky sees it, anyway), her performance no doubt calls to mind the easy, friendly, slightly flirty way Orimoto Kaori gave her email to him years ago. Hikky didn’t think about whether it was just out of courtesy or pity; he merely started to gnaw at the bone he was thrown, not realizing it was all he’d get from his crush.

But Yukino and Yui aren’t Isshiki, and they aren’t Orimoto. They represent Hikky’s only hope of moving beyond the romantic traumas of his past. I just hope he realizes that before their rift grows too wide. They both seem to be waiting for him, but no one’s patience is unlimited.