Nearly as quick as a fairy archer’s kick to a frost giant’s nose, the Norse Mythology / Excaliber (not “ur”) quest is wrapped up.  King Thrym turns out to be far less of a threat than I thought, and he’s dealt with in the episode’s A-part.

That’s accomplished due to more teamwork by the party, and in this case, again I find myself forgiving the sheer size of said party, for no other reason then…well, look at the size of the boss! You need a forward team laying down melee attacks while others stay back and offer ranged attacks and support spells. It’s all pretty by-the-numbers…then Freyja has Kirito find Mjolnir and transforms into a He-Man-garbed Thor!

Not does her sudden gender-swap kill Klein’s brief and only love interest to date (not that it really mattered, since she was virtual), but gives the party the edge they need to bring down Thrym, as Thor proves quite the large and effective decoy, keeping Thrym’s hands full as the rest of the party can attack at will.

Klein wins Mjolnir as a reward (though he sucks at hammer-wielding), and the party moves on to the lowest level of Thrymheim where Excaliber rests. It’s at this point that both Kirito and I remember that he summoned the holy sword once before, after his foe failed to do so…

Yeah, I kinda wish the sword had turned into an creepy, annoyingly haughty cartoon character.

After it’s removed, Thrymheim crumbles and the party starts falling with it, but Tonkii arrives on cue to bear them to safety. It’s at this point that Kirito holds Excaliber uneasily in his hand, and, deeming it still too heavy, throws the thing into the dry lake.

This seemed like a stupid thing to do, and Sinon, agreeing with me, quickly retrieves it with an arrow enchanted with a retrieval spell. I thought she did this because she wanted it herself, but she just gives it back to Kirito, making him promise to think of her when he uses it. A little out-of-character this week, aren’t we, Sinon? Also, why are you giving it back to him? He’ll just throw it away again!

Then Urd appears along with her sisters Verdandi and Skuld to thank the party and officially end the quest, and Klein instantly falls for Skuld and asks for her contact info even though she’s just a virtual NPC and not a real woman and he just met her. This strange and somewhat pathetic move somehow earns Klein Lisbeth’s respect…though maybe she’s being sarcastic?

We cut to Kazuto showing Shino and Sugu his new “mechatronics” demo which allows his digi-daughter Yui fly around the bar, and is it just me, or is the episode running out of stuff to do??

Finally, we end with a big New Year’s feast in the real world, with Kirito taking care of the check with funds he presumably earned in the GGO arc. Overall, this episode was a little disappointing and safe. It wrapped up a fairly inconsequential sidequest, but seemed to have difficulty filling the running time. I’m wondering if one or two more lightweight sidequests are all that’s left in store for the last seven episodes, which would be an even greater disappointment. 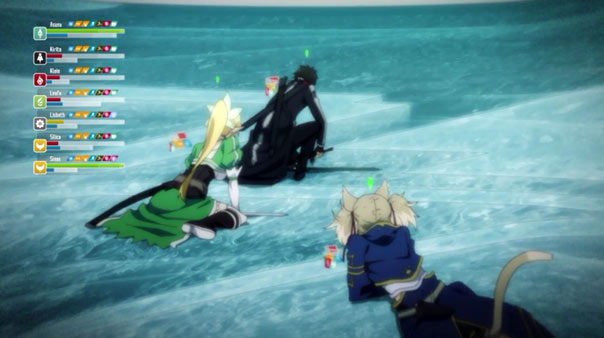 The stakes of the group’s New Years “Just For Fun” Optional Quest for Excalibur are raised significantly when Yui realizes that because ALO uses the same Cardinal architecture for creating random quests drawn from human mythology, literature, and history, the natural conclusion to their present Norse quest is Ragnarok, a “final battle” that will destroy the world, meaning the entire ALO game map, wiping out everyone’s progress.

That’s like your Playstation packing up without warning. Yes, this has happened to me, and it sucks. So now that this is no longer playing around, this episode get sback to the basics of SAO: RPG-style battles filled with physical and magical attacks and defenses. We also finally get why the party is so big; even the minotaur-like guards on the “easier” of the four floors are tough customers that require sustained onslaughts to bring them down. The only thing missing from the battle are flying numbers showing how much HP and MP is being lost or spent.

That tough battle is eventually won thanks to contributions from everyone — yes, even Asuna and Silica fight! — and they move down to the next level, but run into an ice cage where a beautiful damsel is imprisoned and, well, Klein can’t help himself, succumbing to his “Bushido” and freeing her, even though everyone (including him) is pretty dang sure It’s A Trap!

She turns out to be not just any wench, but Freyja, Norse goddess of love, sexuality, beauty, fertility, gold, seiðr (sorcery), war, and death. Not a bad addition to the party, in other words…and Hey, none of the other girls seem to have an interest in Klein, but Klein needs love too! 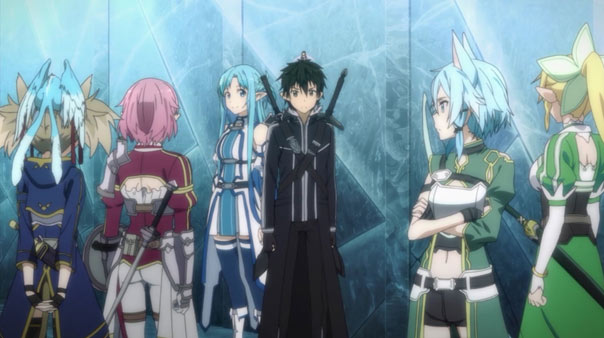 With Freyja now part of the fray, Kirito goes over the plan with everyone: Nothing fancy, just observe the upcoming boss’ moves, look for patterns and weaknesses, and take the bastard out before the medallion turns completely black and they lose all the hours of progress they’d amassed in the game thus far. This one’s for all the marbles.

Freyja immediately exhibits a boon of having her in the party, as she casts a spell similar to “Bubble” that no one else wields, which increases everyone’s Max HP by at least 50%. Combined with Asuna’s party buffs, they’re as prepared as they’ll ever be to face King Thrym. My only nitpick would be that they didn’t get a little more intricate and thorough with the support spells, the way one must do in RPGs prior to a big fight. 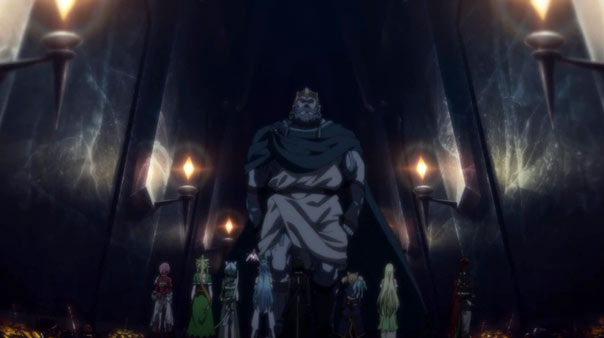 Once in the King’s Chambers, the party is flanked by fantastic wealth, obviously meant as a temptation to draw them off their path or even just delay them until Ragnarok arrives. King Thrym himself, being a frost giant, is suitably imposing, haughty, and mocking, dismissing the intruders as nothing more than flies sent by Urd to annoy him with their buzzing.

Before the battle begins, Thrym notes that Freyja is with him, and that she was sent to his fortress to wed him, an offer he’s kept open, but imprisoned her because he suspected she was trying to steal from him (likely Excalibur). He also loads up three separate health bars, meaning he’s no Yiazmat (by God that guy was a pain in the ass), but he’s no Goomba, either

With the BoB behind us and a week removed from a recap, I was eager to get back to Sword Art Online, and maybe get some more scenes in the real world between Kazuto and Shino. Alas, Sugu tells Kirito that someone’s after the Holy Sword Excalibur, and he’s back off into MMOLand.

Sinon unfortunately just becomes one of the gals, with cat ears and a tail that’s seemingly specifically there for Kirito to pull in jest. Kirito and Sugu gather Asuna, Yui, Klein, Lisbeth, and Silica to complete their rather large and ungainly party of eight. I can’t say I care all that much about Klein, Lisbeth, or Silica; but they’re here, and I suppose they’ll have a unique use as this arc progresses. 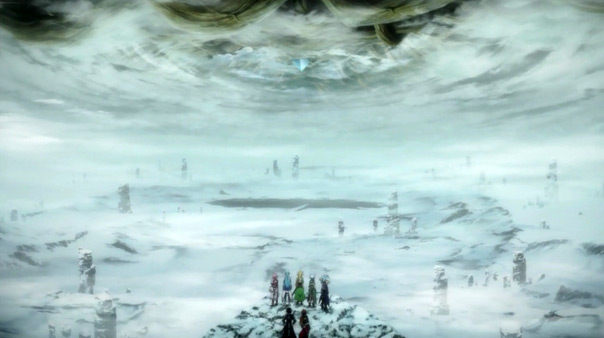 The characters descend into the frozen wastes of Jotenheimr, which is below Alfheim but above Niflheim. There, Sugu summons her friend she rescued from baddies: a very cool-looking eight-winged elephant-octopus thing she named Tonkii that kind of freaks everyone else out a little but proves helpful.

Once the party boards him, they fly through the skies of Jotenheimer until “Urd, Queen of the Lake” appears to deliver quite a bit of exposition about the arc to come. She and her two sisters are of the Hill Giants, who were subjugated by the Frost GIants led by King Thrym of Niflheim who ascended to Jotenheimer and disconnected the roots of Yggdrasil, turning the verdant paradise into the arctic wastes we see.

He did that with Excalibur, which means if Kirito & Co. can retrieve it, the frozen castle Thrymheim that is lodged in the rock ceiling will descend and return Jotenheimer to its previous state. Since he wanted to grab Excalibur anyway, Kirito and Urd’s goals match. I’m not sure what to make of this all yet, but the striking visuals of the new landscape were marred by the sudden gaggle of old and not entirely compelling characters.