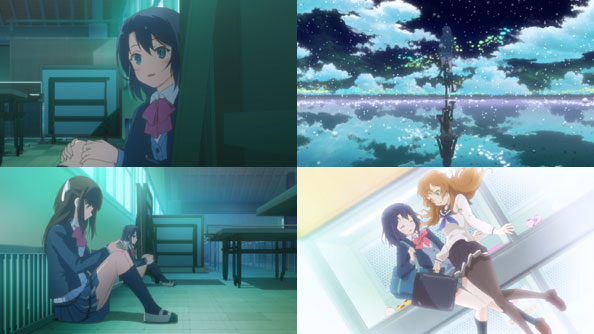 Back when Shimamura was in P.E. and suspected Adachi was on the second floor, but didn’t go up to see her, Adachi was indeed on the second floor, and didn’t expect her to come up and see her. For a couple moments she thinks she might be proven wrong, but it’s not Shimamura, just a third-year (whom I believe is a Hanazawa Kana voice cameo) looking for a quiet spot to read.

Ever since their second year began, Adachi has witnessed Shima easily find new friends, and can’t discern between her smiles and laughs with them and those with her. She gets the (wrong) impression Shima doesn’t care about her, yet can’t help but bike to the mall where they made happy memories, or think of which puppy she’d like best. 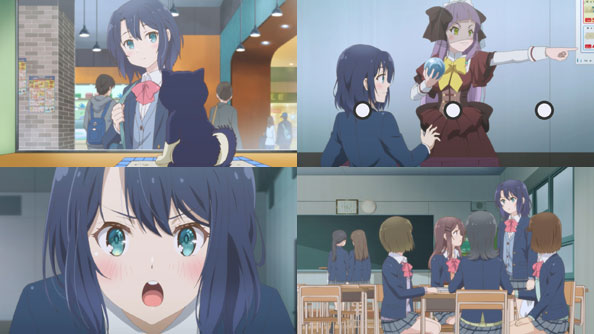 That’s when Adachi and Tarumi bump into each other, unaware of their connection with Shimamura, and Adachi notices Tarumi dropped her strap. Like Tarumi, Adachi thinks it would be just the tops if she and Shima had matching straps. But when spotting a lonely but quiet puppy, Adachi realizes she’s looking at a mirror.

That attitude is nurtured by a very random and fortune-teller, who looks and talks as eccentrically as Adachi is normal. Her advice is solid: the future can’t really be told, it must be desired, which means no running away from what is needed to achieve them. She has nothing to say to Adachi that she doesn’t already know, she just needs a little push to be more assertive in seeking Shima’s attention. 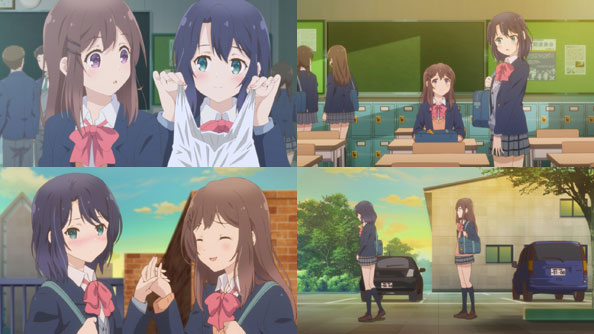 That brings us to a shift in POV to Shimamura, picking up from last week with her “Finally, it’s Adachi” remark. Having not heard her voice since the term began, Shima seems surprised how much she welcomes Adachi’s voice. This new assertive Adachi sits on the same chair as her and shares yummy bread, and Shima just knows that as her fake friends fade, Adachi will keep burning bright.

Shima sees all of Adachi’s moves as a sign her friend has made up her mind that she is the only one she needs. But is the reverse true? Shima can see Adachi has the same interest in straps and need to hold her hand (albeit her other hand) as Tarumi. She envisions her hands being held by the other two, all three of them with straps, in a Shima sandwich.

But only Adachi takes Shimamura aside, draws her into a big hug, and exclaims “I think you’re the best!” and plans to call Shima at 7 PM. She doesn’t stick around long enough for Shima to tell her that’s her usual time, so Shima arranges to eat dinner early, knowing full well Adachi will call her at 7 PM on the dot. 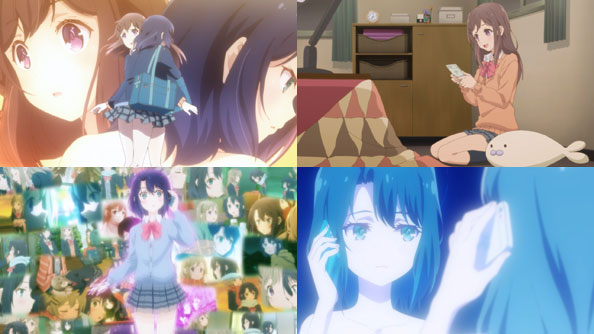 Adachi doesn’t call to say anything specific, she mostly likes the feeling of having Shima all to herself while on the phone. Shima calls her possessive, but Adachi thinks it’s normal, and it is normal, for someone who has feelings for someone and has decided not to run away or equivocate any longer.

Shima admits it’s “not a bad feeling” knowing someone cares about her, and is caught off guard by Adachi’s over-the-phone tears. Still, with Adachi, Shima feels her “possibilities are fixed.” If, not when, she were to choose someone to walk beside, it would be whoever is “best for her”.

While Adachi opened this episode believing she wouldn’t officially graduate to her second year until she confronted Shima, she’s actually well ahead of Shima in terms of knowing exactly what’s best for her and what she wants.

Shima isn’t sure about either, and weary of “surrendering” to Adachi’s puppy-like whims. How can Shima know she’s choosing someone who has already so heartily chosen her? I certainly don’t know, but at the end of the day (and hopefully by the end of this series!), Shima needs to learn what kind of future she desires.