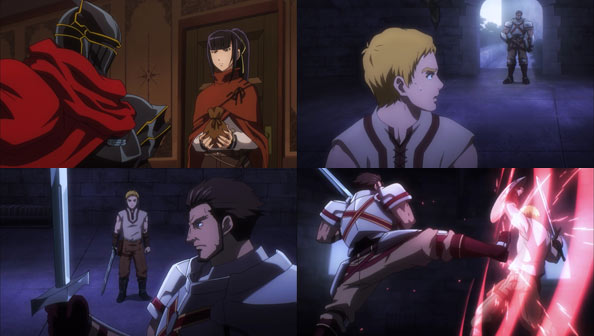 As “Momon” contends with mounting expenses for his various ventures, Gazef (who considers Ainz his savior) seeks out Climb, the princess’ bodyguard. He may have come from nothing and is young and inexperienced, and Gazef seems certain there’s a ceiling to his ability, but Climb is still someone who can hold his own against Gazef in battle, which is more than he can say for most other fighters.

Climb needs to be strong. His Princess, Renner (voiced by The Heroine herself), is called a “monster” by her own older brother, the second prince. There is all manner of wrangling and under-the-table deals between the royals and nobles and Eight Fingers in this kingdom. As such, despite noble warriors like Climb and Gazef, it’s a kingdom slowly rotting from the inside.

Princess Renner, one of the kingdom’s few principled, moral leaders, seeks to cut out that rot, but without any kind of military force of her own she needs willing swords and shields. She has them in the elite adventurer group Blue Rose, who we were introduced to last week burning Eight Fingers’ drug fields.

Renner welcomes Climb to a meeting she’s having with members of Blue Rose, who are preparing to hit other Eight Fingers targets. Renner doesn’t want Blue Rose’s Lakyus Aindra to sully her name and that of her families in such activities, but she has little choice, as she can’t very well send Climb out alone. Instead, Lakyus will “borrow” Climb.

Meanwhile, in the mansion seemingly occupied only by Sebas and Solution, the former has made Tuare a maid, much to the latter’s chagrin. Solution does not like humans and doesn’t see Tuare’s presence as anything other than a nuisance at best and a threat to Ainz at worst. 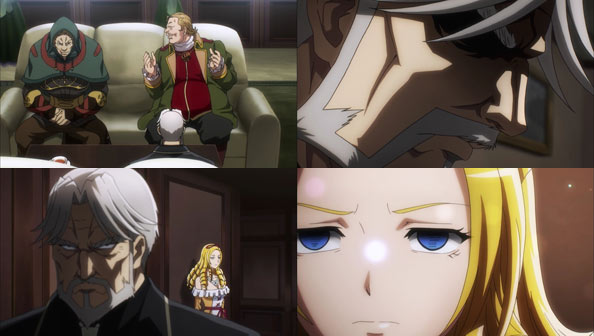 When unsavory parties arrive who wish to get Tuare back from Sebas, and they give him until the day after tomorrow to surrender either her or the “lady” of the house, Solution. These guys are obviously scum, but they and Solution are alike in one important way: neither of them give a shit about Tuare’s well-being.

Only Sebas does, and since only 41 or so people in the whole dang world are stronger than him, Sebas would normally get his way, and Tuare would remain safe. But even he can’t be everywhere at once, which is why when he goes for a stroll to think things over, Solution breaks protocol and contacts Lord Ainz to report the possibility that Sebas has turned on them.

That seems farfetched to me, in that so far all he’s done is demonstrated his empathy for humans and been a Good Samaritan for a woman who had nothing and no one else. If anything, if Ainz hears the whole story he’d find a way to applaud Sebas’ actions. Is Solution overreacting, or does she sense something Sebas a mere human such as myself cannot?

And now for something completely different. Head Butler Sebas Tian witnesses a man tossing a sack into the street; a sack containing a horribly battered and bloodied human girl. Because Sebas does not detest humans as many Guardians of Nazarick do, he takes pity on the girl, takes her back to the mansion, and has Solution heal her wounds.

Solution considers it beneath Sebas to bring human in, and beneath herself to heal her, but Sebas offers no explanations; he only issues orders, which Solution obeys. The girl is a new person when Sebas sees her post-healing, and offers her some porridge. The girl, whose name is Tuare, offers tearful thanks to Seba for saving her when no one else would.

Meanwhile, we check in with Brain Unglaus, who has been shaken to the core by his defeat at the hands of Shalltear. Gazef Stronoff plucks Brain off the rain-soaked streets where he had apparently lost the will to live, insisting he eat something before making the rash decision to go off and die. All Brain can think about is how weak and puny even the strongest humans are against the likes of Shalltear.

Sebas, Solution, Brain, and Gazef not enough for you? Don’t worry, there’s more: two kunoichi stealthily kill a patrol, then set a series of fields ablaze.

We learn the twin ninja are part of a group of powerful-looking adventurers determined to destroy as much of the of the super underworld syndicate Eight Fingers’ drug production and distribution network as possible. Solution mentioned that Tuare was most likely addicted to a drug; most likely the “Black Dust” the adventurers speak of.

Finally, we get a look in at a meeting between the leaders of Eight Fingers, including the one in charge of human trafficking and slaving, who laments he recently lost the girl we know as Tuare. Something tells me that as tough and connected as these guys might be (an adventurer says 8F can “topple nations”), they’re no match for Sebas, who won’t be letting Tuare get hurt anymore.

While I almost lament the conspicuous lack of lizardmen in this episode, a change of scenery is welcome. This is a huge, rich world, after all; focusing on just one small part of it would be a shame.