After ending the rain with her first Sakura Card, poor Sakura is wiped. She can’t even sit up in bed! Thankfully, she doesn’t have a fever, and Sakura assures her dad and brother that she’ll be fine. Touya, who has a sense for magical things without being an active participant in that world, assumes “something has happened” to cause the fatigue.

Sakura misses cupcake-making in home ec, but Tomoyo knows that a visit from her and a bashful Syaoran is just what the doctor ordered, while Syaoran can’t help but stare daggers at an increasingly suspicious Eriol. Similarly, a Yukito suddenly eating far more than usual gets a knowing, not-at-all friendly look from Nakuru, who competes for Touya’s attention by kicking ass at basketball.

When Tomoyo and Syaoran show up with sweets, Sakura is awake, alert, and back to her chipper self, and Syaoran can’t help but blush at her smile and earnest thanks, while Kero is amazed “the kid” was able to make something so tasty. Kero also deduces that Sakura’s fatigue was caused by her instinctively converting the card along with her wand, using a new magic circle in which the star (not the sun or moon) is most prominent.

Kero warns that since Sakura is relying on only her own power (no longer Clow’s) to release and use the cards, it’s going to be tough going. Even worse, he and Yue were stopped in their tracks even in their true forms, something only their master (Sakura) and Clow himself should be able to do.

Back at school while writing a letter to Mizuki-sensei, Sakura hears a lovely tune being played on the piano and discovers it’s Eriol on the ivories. Sakura is heartened and soothed by the music, and when Tomoyo shows up, she suggests Eriol accompany Tomoyo as she sings a new song. While playing, Eriol does…something magical and fishy to the piano.

That evening, while Sakura and Syaoran are walking in the hall wondering what to make of recent events, they hear Tomoyo singing, followed by a scream and a loud noise: the grand piano in the music room has decided to start moving on its own, and it’s gone berserk! Sakura grabs Tomoyo and they run from the pursuing piano, which Syaoran damages but doesn’t destroy with his thunder sword.

Eventually Tomoyo determines the piano is following her voice every time she speaks, which gives Sakura an idea for how to defeat it for good. Assembling on the roof, she asks Tomoyo to sing once more in order to lure the piano to their location. Then she releases the Song card, converts it to a Sakura Card, and uses its ability to copy Tomoyo’s voice to lure the piano off the edge of the roof to its destruction.

All’s well that ends well, but once again Sakura is completely wiped out by the magical exertion, and passes out in Syaoran’s arms. We then pull back from the school to see that our trio of shadowy villains has been watching. The central figure—who let’s be honest, is Eriol—declares that this is going to be “fun”. Sakura passed another one of his tests, but he doesn’t seem the type to keep going easy on her! 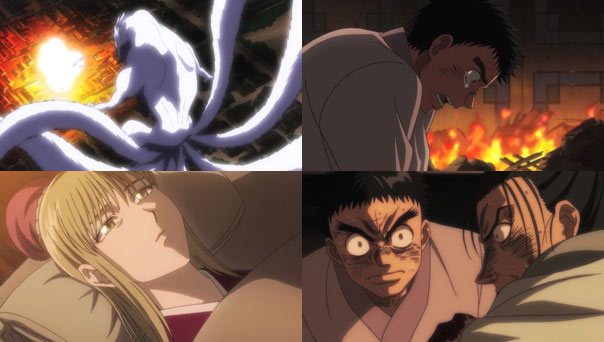 Events get extraordinarily heavy in this week’s UtT, with Hakumen massacring men, women, and children indiscriminately, and Ushio rendered helpless before the monster’s fearful visage. Even Tora’s fire is little more than the inconsequential buzzing of a harmless bug in Hakumen’s ear. Thanks to Ushio, Jeimei and Kiryou are still alive, but both have been transformed by their traumatic experience and the loss of their mother and father.

The way things shake out is even darker: Kiryou knows that human sacrifice is a way of forging a sword strong enough to fight Hakumen, but he dare not suggest it outright, because Jeimei is the only family he has left. Yet it’s Jeimei who offers herself to the flames of the forge, over the desperate protests of her brother and Ushio. Her rationale is that if her sacrifice can lead to Hakumen’s defeat, it’s all worth it. 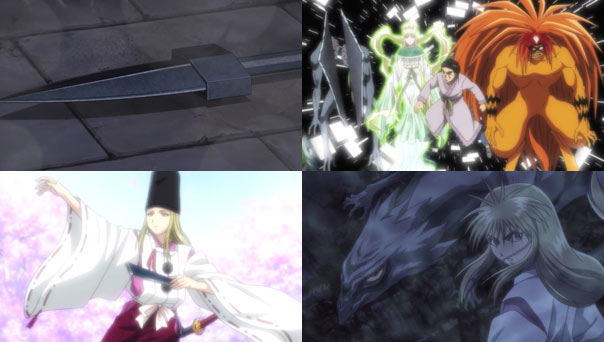 Despair eventually turns to hope, as Jeimei and Kiryou become the blade and shaft of what becomes the Beast Spear, imbued with the strength and power to oppose Hakumen no Mono. Jeimei returns to Ushio and Tora in spectral form to complete her saga: she reincarnated as Yuki, found that Hakumen had inserted himself between the pillars that held Japan up against the very sea, and the task of holding Hakumen in place fell from Yuki to Mikado, and finally, to Sumako, who was only freed of her task deep under the ocean for two years, during which time she gave birth to Ushio.

By travelling back in time, Ushio experienced a kind of causal loop: the reason the Beast Spear chose him is because it contains the souls of Jeimei and Kiryou, who sacrificed themselves with the hope that “Tsung Yue” or Ushio would use the spear they became to one day rid the world of Hakumen no Mono.

His actions in the distant past led to his very conception. And he also learns his name refers to the unyielding, steadfast ocean that bends to no one where his mother dwelt and dwells still. Now Ushio heads home to think over how to go about fulfilling his destiny, which he himself set into motion.

Big change of gears this week, as the focus shifts from the women in Ushio’s life back to Ushio and Tora, who waste no time exploring the suspicious-looking cave with a temple and a really nasty demonic aura all about it. As the very creepy youkai Tokisaka informs them, this is where a piece of Hakumen no Mono landed when he retreated many centuries ago when humans and youkai joined forces to fight it. But it’s not dead, only dormant.

U and T have a lot more questions, but rather then tell them the whole story, Tokisaka decides to send them back in time 2,200 years to the village where it all began. There, outside the castle walls, they meet a young Jiemei, who bares more than a slight resemblance to Mayuko (likely with good reason).

They save her from youkai, but because she can’t see Tora, she thanks only Ushio, and invites him to her house. It’s a nice house, warm and loving and happy…but there’s also a fair amount of sadness to it, both the fact Jeimei’s clothes are rather tatty, and the house is outside the walls.

Turns out Jeimei’s father was once the court priest and swordsmith, but he and the family were cast out when a distant relative tried to assassinate the king. Her father and brother Giryou (whom Ushio also met while within the Beast Spear) are eager to forge a divine sword that will grant them access back into the castle.

When elbow grease doesn’t do the trick, Giryou suggests they use dark arts in the forging process, and hey presto, they churn out one fine-looking sword. Turns out Hakumen no Mono has been in the castle all this time, disguised as nine concubines. His transformation is, shall we say, extremely disturbing and creepy? Because it was, as is his voice.

Hakumen lays utter waste to the court and all who charge him with their divine weapons, including Jeimei and Giryou’s father. Then their mother gets the top half of her body blown off by Hakky’s ice breath. In a rage, Ushio rushes him with a spear, but not the spear we’re used to seeing him wield. That’s because the Beast Spear hasn’t been forged yet. Also, he seems paralyzed by the evil eye of the great messed-up looking beast.

While it’s a bit odd for Ushio to suddenly end up going back in time to relive history, it’s certainly better than a straight narration. It’s also interesting to see Jeimei and Giryou at this early stage, and a glimpse of the happy, simple lives they led before dark arts, fate, or both, thrust them onto far different paths, not to mention see Hakumen no Mono in all his terrifying glory.