Going into the treasure hunt, we predicted Renge would be forced to choose a side, as her new friends Kate and Roboko were being targeted by her superior White Egret, disguised as Madame M. The hunt is just a means to and end: exposing and capturing Zvezda members, but Kate and Natasha take over and make it a real thing. This could mean that part of Kate’s power is making her own whims, wishes, and beliefs come true through manipulation of time and space, a talent akin to Suzumiya Haruhi’s.

While Renge is a member of White Light to better herself and fight evil, Mikisugi seems to take pleasure in looking down on people; she teases Kate and arrogantly tries to shoo off Renge by phone, only to be talked down to herself by her superiors. A box of men is released on the school when Kate activates a trans-dimensional portal in the pool, and White Light’s operation is cancelled. And even though Asuta often questions the validity of his fellow Zvezdans’ wild theories about history and mythology (the voice of reason keeping the show honest), even he can’t deny the fantastic stuff that goes on this week.

Kate drags him into that dimension, then wanders off, and next time he sees her, she’s a towering shadow monster demanding he let her conquer him. He chases her back into the regular world, where he happens to have his Dva mask on when he bumps into Renge. Kate unleashes a massive attack that appears to disperse all parties involved, but the flurry of dark seals stops before it reaches Asuta and Renge. Everything returns to normal abnormalcy, and the item conquered this week by Zvezda could be Asuta’s skepticism.

It could also mark the conquest of the last remnants uneasiness with his new life with Zvezda. The school, his last sanctuary of normalcy, was invaded by Zvezda, White Light, and the Tokyo Special Forces, but he’s not that upset about it. What makes him upset is the final twist we never saw coming: those Special Forces are under the direct command of Tokyo’s governor, who just happens to be Asuta’s estranged father. That means he knows about UDO and Zvezda; it could also mean he knows where his son is and what his son is up to. That is, if people in this show weren’t so easily fooled by masks. 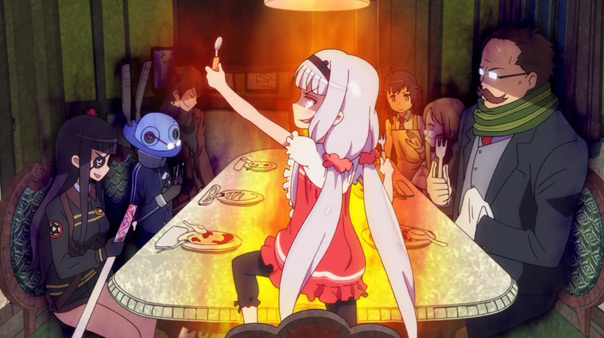 Working his ass off as indispensable all-round doer of cooking, laundry, cleaning, and TP acquisition, school is Jimon’s last refuge. So naturally in the cold open he has that refuge snatched away by the surprise transfer of Kate and Roboko to his class. They and the rest ofo Zvezda aren’t there for Jimon, but for the “Udo Bride”, an ancient treasure Kate learns about by a dubious flyer published by the “Treasure Club.”

With Renge and Jimon’s secret identities secure, the sudden arrival of his colorful “cousins” doesn’t faze her; on the contrary, she swoons when she learns Jimon proposed to the school idol Shirasagi Miki when he was little (though he was instantly shot down). It’s kinda funny and ridiculous that the school accepts a grade-schooler and a robot to middle school, while Iitsuka and a fully-clothed Natasha look more at home. Meanwhile Gorou is ingeniously disguised as a bronze bust in the courtyard.

That first scene with Miki seemed random, but sets the stage for the Treasure Club mystery: it’s all another elaborate ploy by Shirasagi, AKA White Egret, AKA Madame M (lotta aliases pilin’ up!) to trap Zvezda, whose members she’s identified by the UDO levels they gave off while at the club meeting (the inexplicably interactive film reel was a nice touch). As Egret she ordered Renge to stay home, but the fact Renge couldn’t stay away (and indeed is so enthusiastic she shows up in full adventurer’s kit) could be a potential wrench in her gears.

This episode was full of interesting interactions between people who’d normally be enemies warming up to each other at school. In that regard, where Zvezda and Renge are concerned, it’s every bit a sanctuary and “neutral space” to them as it had been for Jimon. But Shirasagi is poised to ruin all that by unmasking the Zvezdians (her flyers will serve double duty as Zvezda power-negating talismans, another clever touch). Renge could learn Jimon and her new friends are all members, meaning she’ll have to pick a side.