Thanks to tireless work on the phones from Karin, Gama Gama finally gets to go on the road. Specifically, they’re bringing a little bit of the aquarium to Nanjo General Clinic’s pediatric ward. The ward’s kabourophobic director, Dr. Kinjou, has only one non-negotiable condition: no crabs.

So as chance should have it, one of the Gama Gama’s Xanthid crabs stows away in one of the traveling aquarium’s tank, and is discovered by Fuuka, who is left alone to set things up the common room when Kukuru, Karin, and Umi-yam are busy with other matters. Predictably, one of Fuuka’s fingers gets snapped and the crab is free to roam the hospital.

Meanwhile, Kukuru presents Dr. Kinjou with some stuffed sea life for the kids and goes off on a tangent about eels, and the doctor ends up making a comment about how nice it is they’re keeping busy before Gama Gama closes.

Karin later tells Kukuru that due to her job with the Tourism Association, she hears things, like that the new aquarium being built at the civic center will sap Gama Gama of what little tourist traffic it enjoys, spelling its doom. Kukuru doesn’t want to hear it, a skulks away to the roof. 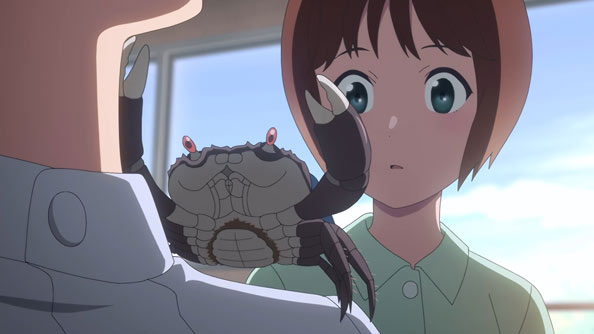 She’s eventually joined by Umi-yan, who primarily came to the clinic to visit his young friend Airi, who was a regular visitor to Gama Gama before her hospitalization. Airi gives Umi-yan and sea life the cold shoulder.

She’s drawn back into the world beneath the waves when the xanthid crab climbs Dr. Kinjou and threatens to snap at her neck! Airi, the only one close enough to help the paralyzed-with-fear Kinjou, reaches out and carefully grabs the crab, marveling at how it’s alive. 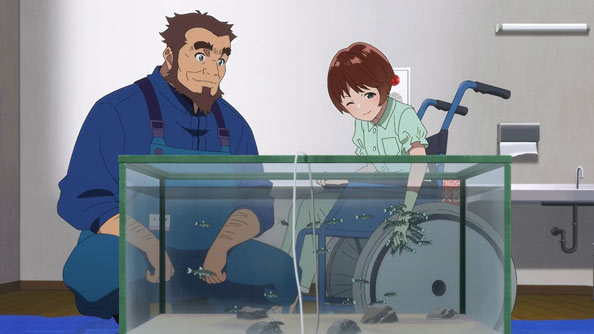 Newly charmed by the sea, Airi joins the other kids in the common room, and the crab is safely stowed in a bucket for the return trip. Airi finally gets to interact with the theraputic doctorfish Umi-yan promised, and a huge smile returns to her face. Like the other kids, the aquarium is a welcome distraction from their health issues.

Dr. Kinjou initially seems ready to lodge formal complaints left and right, but lets the crab incident slide out of appreciation for the sparkly eyes and smiles the traveling aquarium gave the kids. 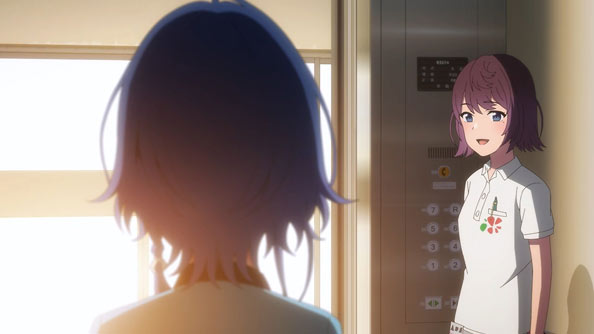 On the elevator ride down to the exit, Karin confesses that it was once her dream to be an aquarium attendant like Kukuru, but had to choose more stable employment due to her family situation.

When she watches Kukuru rush headlong towards her dream, Karin can’t help but feel a little envious. This makes me wonder if there’s a potential future where Karin makes her dream come true at a revitalized Gama Gama. But with news of a shiny new rival aquarium and a new face who has come to train at Gama Gama for that aquarium, Kukuru faces a very uphill climb.

It’s here where I must admit I found this to be the weakest episode of Aquatope yet, even though I still enjoyed it. Some of its strongest moments felt like variations on very similar, stronger moments from past episodes. It wavered between a Karin-centric episode, keeping the pressure on Kukuru, and Umi-yan being the nicest big guy in the world.

Most importantly, it had precious little Kukuru-Fuuka interaction. Whether you see their relationship as sisterly or romantic, it’s the beating heart of this show, and without it the episode felt underweight and hollow—like a crab you caught that’s too small to eat.

Grimoire of Zero continues to feel episodic; last week was the big city episode, while this was largely a transitory outing, full of little slice-of-life vignettes that serve to deepen our understanding of who Mercenary, Zero, and Albus are—not to mention having the latter two bounce off the former, both literally and figuratively.

One thing is clear: Albus has quickly softened his “kill all beastfallen” stance, while Zero, neophyte to the outside world that she is, has formed a very close bond with Merc, considering him not just an employee, but a project.

She and Albus repeat the joke about them being sex slaves to the gate guards, but when one of the children he scared away is hurt (when another beastfallen shoves her out of his way), Zero makes it look like Merc fully heals the young woman’s ankle.

Changing hearts and minds will be key if the war between the factions of this world is to ever cease. After that, the downright leisurely pace of the episode is mitigated somewhat by the fact the trio covers a fair amount of ground, much of it very picturesque (see above).

Albus gets some pointers on fishing magic from Zero, while Zero also attempts to give Merc a kiss (and is rebuffed by the bashful tiger).

The trio tucks into another fine meal by Merc (who wants to one day open and run a tavern), and learns that Albus was orphaned and raised by his granny, and that Zero grew up in the caves studying sorcery and may well have developed her Grimoire of Zero in order to eat better. Not a bad reason, if you ask me!

Continuing the theme of Zero wanting to get closer to Merc, she offers to train him in magic, which will keep them together for some time. All this sticking around with people for an extended length of time is clearly a new concept for Merc, but I don’t think he loathes it as much as he sometimes protests; quite the contrary.

Thinks finally take a turn for the dark, and a rather sudden one, at that, once the trio reaches the outskirts of their next destination, the village of Latette. Albus knows the village well, and a dog he knows comes to greet him, but it’s carrying a burnt doll. The trio looks on and is horrified to see it is also smoldering; its inhabitants burned alive.

Is it mere raiders, or more likely, hostile witches fighting in their late idol Sorena’s name to exact revenge on humans? Whatever it is, our trio will likely have to tread carefully once again, and avoid revealing too much of themselves to strangers—something they now have no trouble doing with each other.

Grimoire of Zero has its charms, but it isn’t particularly spellbinding; it’s a bit of a dawdle at times. It’s certainly no match for recent fantasy adventure shows like Grimgar, Alderamin, or Re:Zero. If it was airing any other day but Monday I’d have probably already dropped it, but after a four-episode sample, I believe I’ve watched enough after all.