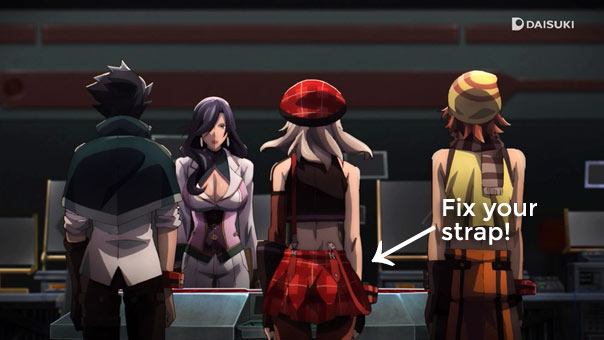 This week Lenka’s charges are suspended and he’s officially assigned to Fenrir East’s First Unit, along with Alisa and Fujiki “Wears a hat and scarf like he’s cold, but wears a crop top like he’s hot” Kouta. While Lenka’s look is pretty understadted, the other two’s elaborate outfits seem laughably impractical, especially considering singular mission they’ve been tasked with: Save The World. 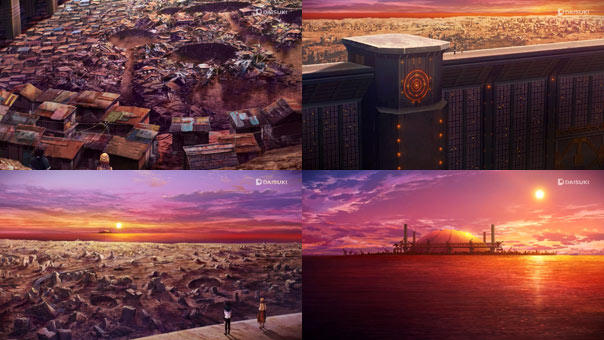 While Alisa wordlessly walks off when asked to join, Kouta drags Lenka out of HQ and into the slums where he grew up, including to meet his mom, who is very worried about him. They also check out the craters of destruction an aragami battle caused, watch food being distributed, and catch a glimpse of Aegis, mankind’s last best refuge, currently under construction. 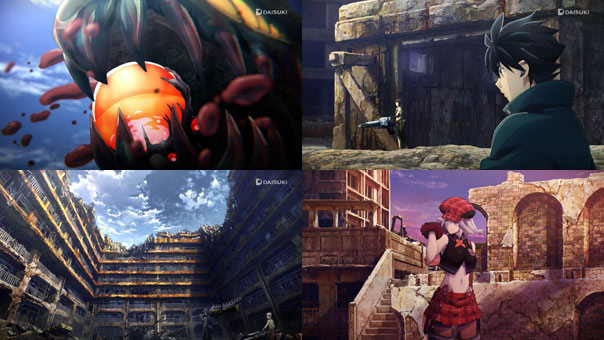 You’d think those upon which something so important rests would be trained prior to going out in the field, or would be discouraged from cool-looking but reckless and unnecessary actions, or punished if they blatantly disobeyed orders from their superiors. The six-man unit splits into pairs to hunt down six cores of a specific type of aragami, but the mission is pretty rocky, as Alisa ignores orders from Sakuya, Kouta fails at his job, and Lenka can’t finish a foe off in one blow, which he needs to do if the future mankind is to rest upon him. 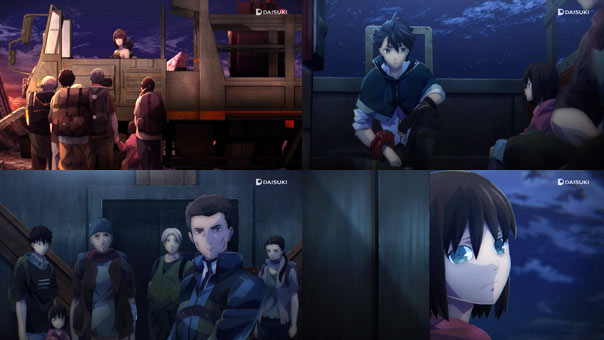 So yeah, it’s a rough mission, but at least the flaws of the newly-formed unit are borne out in a relatively low-risk setting…right? They also come upon a group of wandering civilians and get to take them back to Fenrir. Lenka gets to see a sliver of the mankind whose future rests on him, including a cute little girl I knew was doomed.

My suspicion was confirmed when they get back to Fenrir and the civvies are turned back at the gate, because none of them possess the latent ability to wield a God Arc. Like the civilians on the aircraft carrier in World War Z, the only civvies who are able to live under the military’s protection are related to the ones doing fighting. It’s a raw but a practical, transactional one; at least more practical than Alisa and Kouta’s (and Sakuya’s) getup. 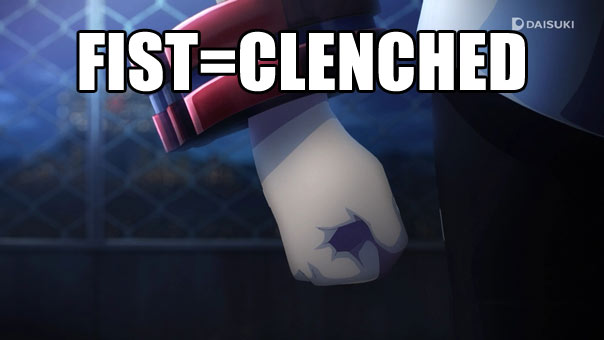 Anyway, Lenka learns he’s not necessarily fighting for ALL mankind; just the part of it that’s able to properly contribute to the war effort. The rest are SOL. And we learn a tiny little bit about him: he’s the kind of guy who is upset about such things. When he gave that doomed little girl water, he was convinced she’d be safe within Fenrir’s walls. And fighting for Fenrir must feel like siding with the people who sent that girl to her almost certain death.

Mind you, most protagonists would have a problem with this, and would react by clenching their fists with rage and indignation. And that remains GOD EATER’S problem, after just four episodes in six weeks: for all the distinctiveness of their outfits, I still can’t be all that excited about any of the characters. All their personalities are some combination of nondescript, dull, obvious, and one-note. 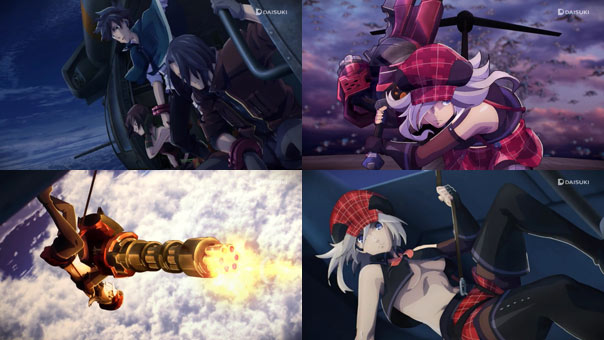 GOD EATER follows up its slow, stretched-out, uninspired second episode with a big shot of adrenaline, as the entire third episode is one big aerial battle. It could also have been titled “Enter Underboob”, as after a couple of glimpses of her last week we finally see Alisa in her element (as opposed to sitting quietly on a plane) as a (mostly) efficient exterminator of Aragami.

The First Unit and Lenka in particular gawk from their helicopter as the one-woman army Alisa darts and jumps and repels about the giant transport plane. Not only does it get to show us the extent of her abilities (and her superiority to fellow new-type Lenka), but also the various tools at a new-type’s disposal. Alisa switches from sword to gun with ease, and when she tuns out of ammo, she simply uses her arc to devour an aragami and convert it into more ammo…which is a handy trick. 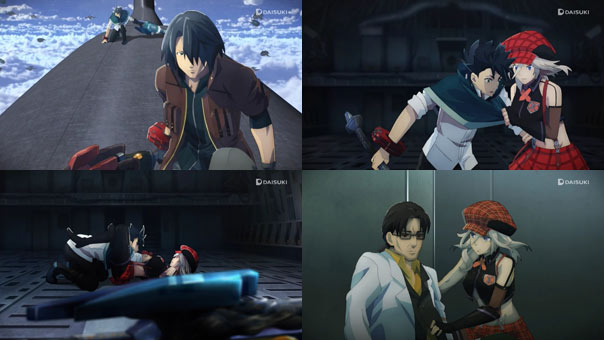 When Lindow, Sakuya, and Lenka spot a gigantic swarm of fresh Aragami on the horizon, Lindow decides it’s time to grab Alisa and leave before they get there. It’s a practical and pragmatic call, considering Alisa’s importance to the war effort. But when Lenka jumps down to get her, Alisa pounces on him and proceeds to beat the everloving shit out of him. The message is clear: she’s not leaving the plane. Shortly thereafter we learn why, and see another side of Alisa: the plane is full of wounded survivors, and she won’t abandon them to save her own skin. She values their lives as much as her own (if not more). 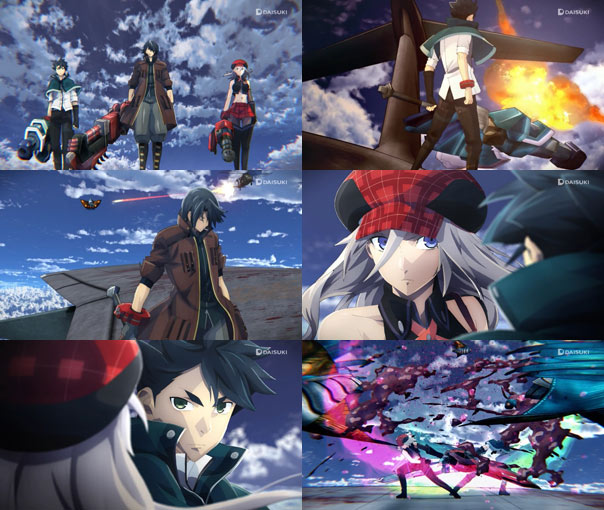 If Alisa won’t leave and they can’t make her, Lindow changes his orders: the four God Eaters will go all out in a defensive stand. They’ll either defeat all the Aragami after them and land safely at Fenrir east together, or they’ll die together.

We get a lot of badass shots of the team about to get to work, and then working. Lenka gradually gets the hang of his arc and is able to keep up with Alisa; while she had a head start I imagine his kill tally was comparable to hers when all was said and done. He even learns to devour.

There are also a lot of smooth moves, like Alisa and Lenka using both versions of their weapons to kill Aragami, or Lindow tossing one into Sakuya’s firing line so she can finish it off. Their flying battlefield, surrounded by sky on all sides, adds excitement and breathlessness to the proceedings. 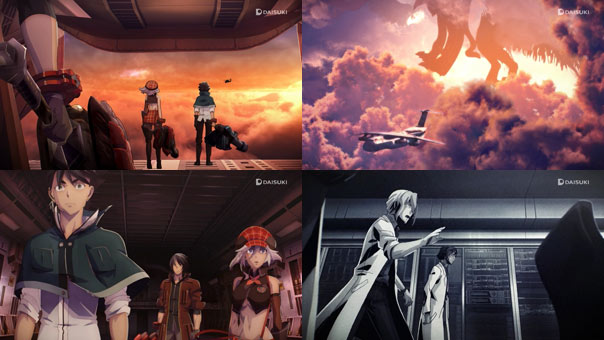 Speaking of breathless, how about that sunset, as seen from the plane’s cargo bay ramp? Or the shot of the absolutely massive Aragami taking the helicopter decoy bait, which definitely looks like a very very good thing to happen, as despite our heroes’ successes, there remain things well out of their league…at least for now.

So…why only an 8? Well, because GOD EATER is very one-dimensional. It’s hella cool and stylish and fun, but it’s ultimately empty calories: immediate satisfaction but no nutrition. The characters are very well-drawn and awesome looking, but there’s nothing below the surface. Alisa, like Lenka, is just another bland cipher we’ve seen a million times before (though Sakamoto Maaya does a good job voicing her).

And while I’m not really going to get into the hefty suspension of disbelief required to accept the physics of the battle (Are everyone’s shoes magnetic? Does no one need oxygen), it was pretty silly how last week the much faster fighter jets were immediately taken out by the Aragami, yet this week the helicopter was completely ignored. GOD EATER remains great fun and this was a far better episode than last week’s, but its core flaws remain, which can’t be ignored.