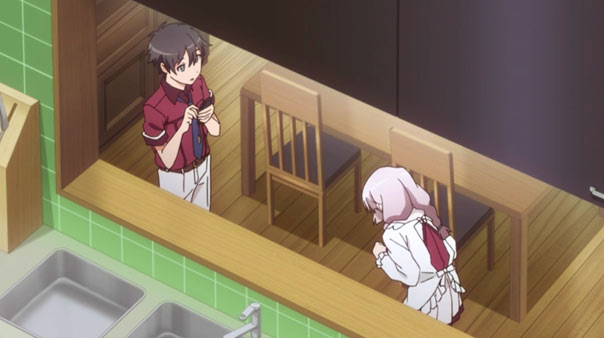 This week it’s Kushikawa Hatoko’s turn to be the focus, and her story is simple, and very sad: of all the girls in the lit club, she’s known Jurai the longest. As his childhood friend, she’s been by his side almost constantly. And yet, for all that closeness for all that time, she fears she understands “Ju-kun” the least.

Now in high school and no longer kids, Hatoko is finding it harder to get her share of Ju-kun Time. She thinks she’s gotten just that, at least for a day,  when Jurai invites her to his house to cook for him and his sister. That’s right: despite her agreeing to cook for him, he won’t so much as walk home with her, so concerned is he about Tomoyo’s writer’s block. As he grows closer to Tomoyo, he drifts further from Hatoko… 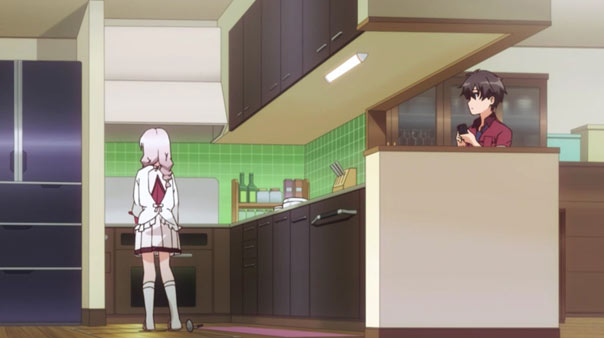 But as a couple of flashbacks indicate, as much as she’s been by Jurai’s side, she’s rarely been able to understand all the crazy things he says, or the weird literature he recommended. For years and years she laughed it off, pretending not to care about the lack of connection with him, but each time she did that she bottled up a little more stress. 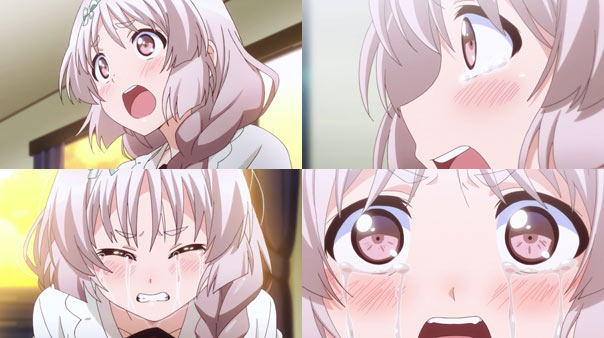 Jurai’s increasing attention to Tomoyo, combined with his own refusal to tell her what’s going on because “she wouldn’t understand”, increases that pressure to critical levels, and the sweet, kind, caring Hotoko simply…SNAPS, unleashing a free-wheeling three-minute-long tirade with no breaks about how she’s never understood a single thing he’s ever said to her, before storming out of his house in her slippers and apron, without her cell. I guess she just hit her limit.

Big kudos to her seiyu Hayami Saori for really belting it out; moreso, if she did it in a single take. This was a properly epic rant, and it was even a little meta, for those who may have been a little exhausted by this show’s intricate use of language.

Jurai is…stunned. He had no idea Hatoko was anything other than nice and happy and stress-free, as bright and cheerful as the sun she cosplayed as a couple episodes back. He doesn’t even realize to the extent he’s ignored and devalued her lately, so immersed has he been with Tomoyo. A chance encounter with Sagami while he’s looking for her doesn’t help matters: he admits it’s always been tough for him and everyone else to watch him and Hatoko, so bad a fit they’ve always been.

Jurai gets depressed and falls down a hill, but Sayumi comes to heal him and help look for Hatoko, and Tomoyo comes too, giving him a slap in the face and telling Guiltia Sin Jurai to get it together, because she doesn’t like seeing him like this. She’s paying him back for helping her out of her light novel funk. I have to say, these two are coming along rather nicely. 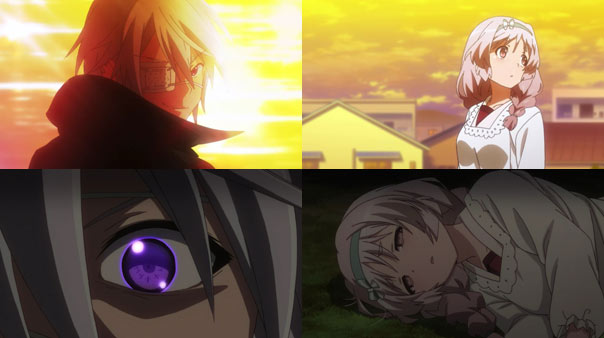 Speaking of chance encounters, Hatoko runs a very long way in those slippers and that apron, and comes upon Hajime of all people by the riverbank. She airs her troubles to him, and he gives her some very good advice, which calls back to his excellent discussion with Jurai about the inherent paradox of being a Chuunibyou. If you can’t understand it, don’t worry; you’re a necessary force in his life precisely for that reason, even if Jurai himself never thought of her that way.

Sagami finishes up his lovely Chuuni explanation/pep talk by…oh yeah, knocking Hatoko out with some kind of superpower than calling all his conveniently close-by compatriots to gather round her.

Whoa. So…they all have powers too, right? You gotta hand it to this episode: it wasn’t satisfied with merely exploring Hatoko, but using the escalation of her drama as a catalyst to forward the overarching story, introducing a new force of people with powers…and unknown intentions.

Hatoko may not just need to be found and given a hug and an apology…she may need to be frigging rescued!