After treating Kozakura to well over $100 worth of dinner as an apology for her unwanted excursion to the Otherside, Toriko and Sorao complete their making-up by ordering another $100 worth of grub and drinks. During the meal, Toriko whips out Lady Hasshaku’s hat, which turns out to be much more than bad table manners.

After the waiter starts acting very strange (muttering about “sublance” and “abardmont”), Sorao leads a tipsy Toriko out of the oddly empty café and to the station, but something is off about Ikebukuro: all the lights are out and there isn’t another soul in sight. Before long the pair find themselves in an unfamiliar field, and encounter a bizarre two-headed robot horse-like monster, carrying several hanging bound bodies. 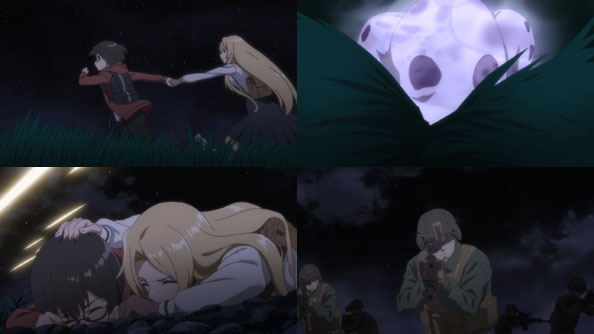 Neither brought guns to dinner, so they have to make a run for it, with Sorao doing her best to scope out potential Glitches. They reach a train track, which they believe will eventually lead to a station (i.e. shelter), but they’re then chased by a frightening mass of glowing purple faces.

Suddenly, Toriko hits the deck and has Sorao do the same, and bullets fly over their heads—bullets from the guns of soldiers. Their leader identifies the girls as human in Japanese, but his men chatter in English. The bullets aren’t meant for the girls, but for a third monster: a towering Groot-like hulk with branches for antlers.

Eventually the tree man wanders off, while the robotic horse doesn’t continue its pursuit. The lead soldier introduces himself as U.S. Marine Corp Lieutenant Will Drake, commander of the Pale Horse Battalion, Charlie Company 1/2 out of Okinawa. (“Pale Horse” is a reference to Death, the fourth Horse of the Apocalypse.) He and his unit have been trapped in the Otherside for over a month, while their robotic pack mule was transformed into a monster that has claimed a number of his men.

Lt. Drake & Co. lead Sorao and Toriko to “February Station”, which Sorao identifies as Kisaragi Station from the real world, but the group keeps moving until they reach the company’s well-equipped base camp. The thing is, a lot of Drake’s men distrust the girls and aren’t convinced they’re not monsters in disguise. They obeyed his orders to stand down this time, but what if fear of the unknown, or additional illusions, cause them to lash out?

The introduction of American marines from Okinawa to the Otherside, as well as the new manner in which the girls ended up their themselves, brings a fresh new dynamic to their adventures. Toriko may have been joking about marine basic training, but now they find themselves unarmed and exposed in a potentially paranoid hornets’ nest. As Toriko is also fond of saying, as long as they stick together, things will work out. Here’s hoping.

Ah, nothing wakes you up and gets you ready for the morning than the upbeat stylings of RaFa and meg rock…even if that show is primarily about drinking booze, which in the morning usually only comes in the form of the occasional mimosa or bloody mary (for the record, Takunomi. airs at 2:43 in the morning JST).

At first, this episode seems more interested in a suddenly somewhat homesick Michiru’s futile quest for fish to eat; ironically back home there was hardly anything but fish and she always craved meat, but the protein tables have turned. It’s fortunate, then, that Nao and Makoto’s folks shipped them a care package full of fish from Hokkaido, and that fish is waiting for Michiru when she gets home.

It’s when Michiru finally gets some fish that Nao introduces the booze of the week: sake, and not just any sake, but Dassai, made from 50% polished rice for extra fragrance. Nao welcomes Michiru to the “Fish-and-Sake Pairing Crew”, and the new squab learns firsthand how blissful a bite of fish is when paired with a sip of Dassai. “Captain” Nao goes on to list the higher quality sakes, the highest of which don’t even disclose how much they polish the rice prior to brewing. 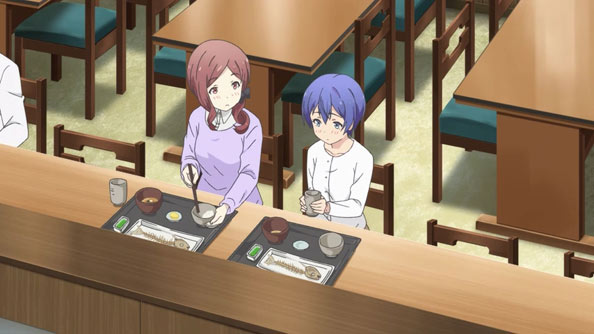 The first time Michiru tried sake, she could barely handle it, but now that she knows it’s all about the kind of sake you drink and what you pair it with, she’s expanded her drinking horizons thanks to Captain Nao, and shares her rekindled passion for the occasional fancy fish set with a co-worker at lunch.

This week we learn a little more about Midorikawa Kae, who at 27 is the eldest member of Stella House Haruno. Specifically, we learn she isn’t the most excited about continuing to grow older and remain single, as well as her preferred drink (red wine).

Neither Michiru or Makoto like the wine straight (probably the tannins), but Kae cuts it with ginger ale to make a “kitty” (akin to a spritzer) that many guests at her weddings are able to enjoy.

Kae has a few too many of these amidst a light accompaniment of almonds, crackers, cheese and ham, and shows Michiru and Makoto the kind of drunk she is: a bit of a pessimist at first, and devolving into someone who simply wants someone or something to spoon for the night.

When Michiru brings her phone, Kae is in the latter state, and Michiru is snatched up and becomes Kae’s warm stuffed animal for the night. The next morning, Michiru can scarcely look a much-better-put-together Kae in the eyes, but Kae doesn’t remember last night…until Michiru jogs her memory.

The moral of the story is as simple as it is universal: Try not to drink too much…especially if you have some not-so-happy thoughts on your mind!

So, here we are: Hayashi and Lily IRL. Was it a setup by Koiwai? Apparently not; due to her Elite NEET status, Morioka got the day wrong. Little does she know that Sakurai is really Lily, which is the true reason he knew to where and when to “rescue” her from the wrong day.

Let’s not beat around the bush here: Sakurai is, like, totally into Morioka, and their date goes as swimmingly and is as enjoyable as when they’re hanging out in the MMO…maybe moreso! It’s just as enjoyable to watch, despite the fact neither party treats this as an official, “real” date.

I’m a little disappointed things are more complicated than Koiwai staging a setup to get the two together. That seems to be what he’s doing anyway, considering he stops joking around and directly asks Sakurai if he’s really okay with him going out alone with Mori-Mori tomorrow. I’d personally be fine with Koiwai graciously backing out of the triangle rather than keeping the heat on.

I was also a bit miffed that Sakurai made no serious effort to tell Morioka the truth about their being MMO partners. What could have been a built-in in with Morioka instead needlessly muddies the waters. There’s never going to be a good time to tell her, but he needn’t keep holding off the truth until it’s a unequivocally bad time; or worse, to late to salvage any kind of relationship. 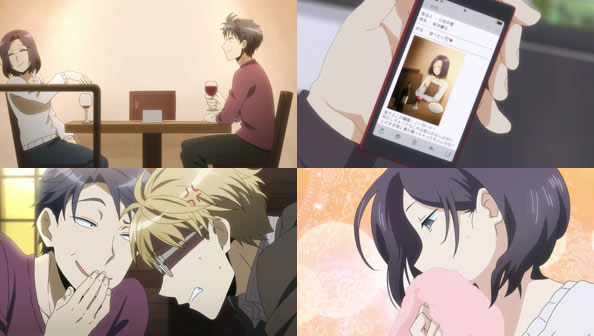 Sure, I’m getting ahead of myself, but c’mon; we’re not honestly supposed to be rooting for Koiwai and Morioka. Still, while Koiwai teases both Sakurai and Morioka incessantly, he also shows that he genuinely cares about both of them, and isn’t putting on any act for Morioka (who is almost constantly selling herself short).

Morioka thinks the last two days to be almost too good to be true, but I was glad when she corrected herself earlier and said “thank you” instead of her usual unnecessary apologies. I also liked how she mentioned she might not have left her job if she had co-workers as kindhearted as Sakurai and Koiwai. This suggests that a part of her didn’t really want to resign, but it felt like the best way out of a bad situation. 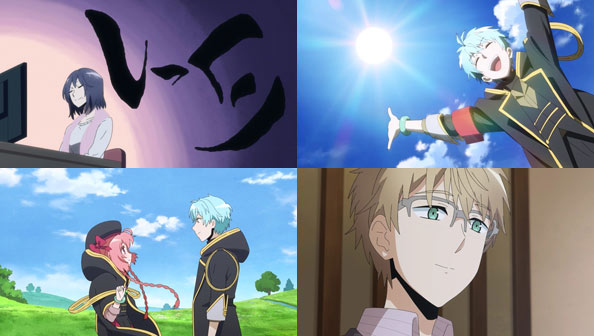 In any case, it’s wonderful to behold Moiroka’s jubilation upon returning home and, more importantly, re-entering the MMO as Hayashi after two straight nights of going out and drinking as Morioka. It isn’t long before Lily shows up. Sakurai looked like he was in agony the whole night Koiwai was out with Morioka, but he’s decidedly relieved-looking upon her return to the MMO and his (well, Lily’s) side.

Still, I worry he’s being far too passive. Allow Koiwai go out with Morioka too much unchallenged, and there’s a good chance Koiwai falls for her and says “Sorry Sakura-chan, you had your chance!” Heck, that may already be happening! The only one who can do anything about this sad state of affairs is the one enduring them. And he’s only got four episodes left to do it!