Suphia and Shion’s sizing-up duel starts to grow out of control when Albis, transforming into a serpent woman, breaks up their fight. Both she and Suphia are satisfied that Tempest is a nation worth cooperating with. Unfortunately, Shion loses control of her Magic Bullet, which threatens to destroy everything within a large radius. Thankfully, Rimuru is there to swallow up the bullet with Gluttony, further impressing his guests.

That night in the new reception hall, Rimuru throws a feast, but learns that Albis and Suphia are primarily interested in drinking every drop of the apple brandy prepared in their honor. When Rimuru brings up the limits of fruit harvesting, the Eurazanians offer the first trade inroad: their ample fruit crops. As long as the liquor keeps flowing, the Beastketeers will be happy. The rest of their delegation meets with Shuna, the Riders, and the Dwarves, all of whom are happy to share their knowledge. 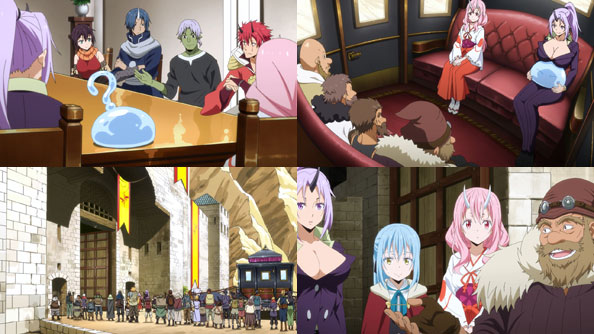 After the Eurazanian delegations departs, Youm and his men head out as well, just as Benimaru & Co. return from Eurazania with good news. If Tempest has one weakness, agriculture, which happens to be one of their new animal friends’ greatest strengths. Rimuru will have the next delegation focus on farming, and Benimaru tells him Rigur is up to the task of leading that delegation.

With that, Rimuru heads off on his own diplomatic mission, an official state visit to the Dwarven Kingdom, accompanied by Shuna, Kaijin, the Dwarf brothers, the Goblin Riders, and Shion…who threw a temper tantrum until Rimuru allowed her to come. On the way they see how much progress Lord Geld and the Orcs have made repaving the roads destroyed by Charybdis. 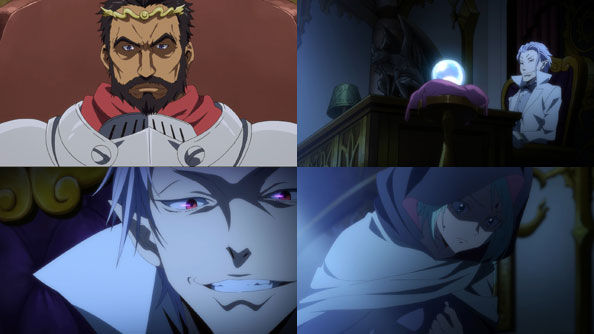 King Gazel seems happy to see Rimuru, an indication that things are going very well diplomatically for the Jura Tempest Federation. Of course, there has to be some kind of obstacle to continued success in the future, and we get a hint of that at the very end, as Lord Clayman watches a crystal ball report from Myulan, one of his spies.

Of course, as with all conflicts in TenSura, it won’t be a matter of whether Rimuru & Co. can come out on top, but how they end up doing so, while keeping their nation and its relationships strong. So ends another feel-good, functional, but not particularly exhilarating outing.

TenSura returns after a rambling first season finale, multiple OVAs, and full-length recap, only to give us a tedious, redundant, and lazily-executed clip show (it’s literally just clips of past events flying by), followed by a woefully generic opening theme. Thankfully things look up from that rough start, but it’s clear TenSura remains quite unconcerned with exercising airtime discipline in between big arcs.

Once Rimuru leaves the five kids in the care of Tiss-sensei, the main order of business is establishing diplomatic relations with the Animal Kingdom of Eurazania. Rimuru tries on a number of outfits to send off his delegation, led by a much-matured Benimaru, and when his speech is too short, he adds a bit more to the end of it, somehow moving Rigurd and Gabiru to tears.

With Benimaru’s delegation properly sent off, focus shifts to preparing the assembly hall for the arrival of Eurazania’s delegation. Vesta uses his noble background to help ensure all the diplomatic “i’s” and “t’s” are dotted and crossed, while underlings like Treyni announce that the Eurazanians are five days away.

That means they won’t arrive before Youm and his two buddies, who have aligned themselves with Rimuru and Tempest and have been spreading the word to other humans that the monsters of Tempest are nothing to fear. Rimuru welcomes them with brandy and a hot bath, again demonstrating that comfort and relaxation are chief tenets of the Tempest lifestyle.

The next day, Rimuru and his retinue welcome the Eurazanians, who arrive in a procession of gaudy carriages drawn by giant fluffy tigers. The delegates who have come on behalf of Demon Lord Carrion are the Three Beastketeers: Albis, Suphia, and Grucius. Among the three, Suphia is the most outspoken, and the anti-slime insults fly with abandon.

Rimuru asks Youm to fight the rude and fiery Suphia, but Shion steps forward and fights her instead, without her sword, resulting in the episode’s first cool fight between overpowered warriors. The second fight begins shortly thereafter when Grucius, “runt” of the Beastketeers, takes on Youm in a daggers-vs.-sword duel.

Rimuru had hoped things would go a little more smoothly and less violently, but there can be no diplomatic progress without mutual respect, so it becomes necessary to prove to the Beastketeers that the warriors of Tempest should be respected. Or as Seraph from The Matrix Reloaded once said: “You do not truly know someone until you fight them.”