Riko and Reg descend the four thousand meters of the Great Fault (over ten Empire State Buildings, for those keeping count) using the “weakling’s way”, as Ozen suggested: the network of tunnels within the fault’s walls.

They quickly learn why when they inadvertently scare some flat, fluffy Neritantans out onto the edge, where a few quickly become lunch for the flying Madokajacks.

The Neritantans are ridiculously adorable, but this isn’t a place where you can be sentimental about such things if those animals are the only thing you can use to distract the predators that make no distinction between them and you. 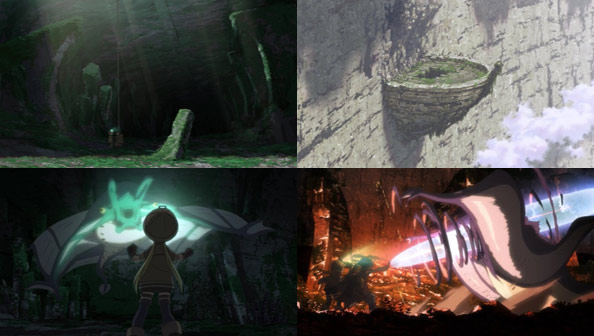 Riko and Reg find the ancient ruins of a ship embedded in the fault wall, which raises so many questions, chief among them how it got there. In any case, it’s super cool. But just as the Madokajacks were distracted by the Neritantans, Riko is distracted by the prospect of finding cool relics.

She doesn’t realize until it’s too late that she’s strayed right into a Madokajack nest. Ozen warned Reg not to use Incinerator recklessly, but he’s confident Riko will be safe for the two hours he’s out if he uses it, so he does…and it continues to be a fantastic, if terrifying, sight to see. 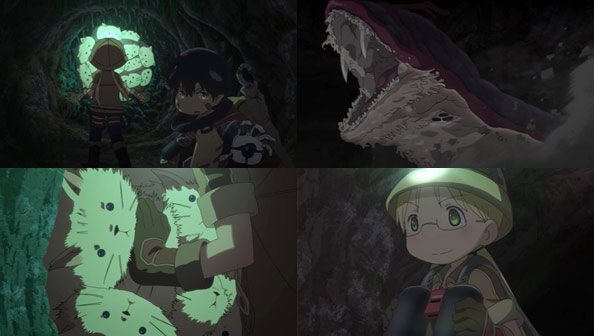 What Reg didn’t know is that the strange distant sound he’d been hearing was a Crimson Splitjaw, who he grazed with the beam from Incinerator. He and Riko have to book it fast before he passes out, and they seem to receive som karmic justic when their only avenue of escape is blocked by tightly-packed, Neritantans.

If I didn’t know better, I thought I saw the thirst for vengeance in their beady little eyes. But the roar of the Splitjaw spooks them and they disperse. In a place of relative safety, Reg warns Riko to stay where she is and then passes out. Now who seriously thought Riko was just going to sit around? 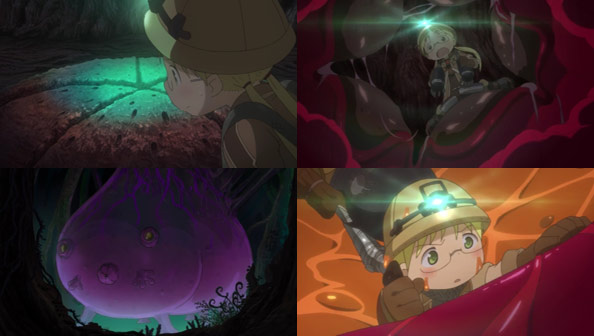 No, She’s Got This, and wraps Reg’s extendo-arms around her and drags him behind her…straight into the digestive chamber of a Amakagame, yet another wonderfully bizarre beast of the Abyss. But this is Riko we’re talking about. Does she panic? No, she breaks out her knife and stabs the shit out of the Amakagame until she’s pierced its skin and escaped.

At first, I thought the legions of Neritantans that amassed around her were there to celebrate her vanquishing of the monster that claimed so many of their own—an “okay, we’re even now, you’re not so bad” kinda moment.

Then I remembered she smells like the fruit they love, and they swarm ravenously at her, the cute fluffy-looking animals suddenly a little more threatening. They cause Riko to fall down another steep tunnel, but far from a shortcut, it dumps her at the bottom of hexagonal basalt cave, and the only way out requires an ascent of several hundred feet. 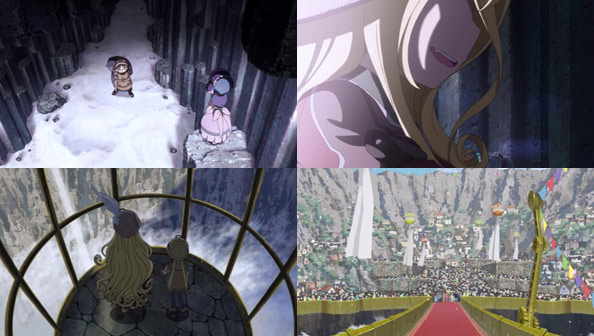 It’s rough going, as Riko experiences headaches, dizziness, nausea, and the kicker: extremely realistic visual and auditory hallucinations. I mean, she might as well be on the holodeck, because she’s in a full-fledged dreamworld.

She knows what (and who) she’s looking at isn’t real…until her mother appears and they ascend all the way back up to Orth in the same gondola at the Seeker Camp. There, the entire city has come out to celebrate their return to the surface. What snaps her out of it? The fact that Reg isn’t there. He’s her totem, and he saves her butt again, without even being awake.

However, at nearly two hours, it’s really time he does wake up, and none too soon, either, as the Splitjaw that was after them before has found them again. Riko decides it’s time for Blaze Reap, but even as she wielded it and faced down the Splitjaw’s charge, it just didn’t look like she’d be able to do much damage.

Fortunately, Reg does, and uses his superior strength and speed to land a critical blow on the Splitjaw’s jaw, with the axe’s power causing multiple explosions that disable the beast once and for all.

With both kids awake and safe, Reg apologizes for going out so long, but Riko is actually appreciative: she learned by doing that taking this journey all by her self really would have been impossible, while Reg is certain it’d be impossible for him too if he didn’t have Riko with him.

Next up, the Fourth Layer: The Goblet of Giants.