The near-miss with the car brought back Kagari’s memories, but only some of them. She’s still missing a 12-year gap between 10 and 22. As a result, Kagari acts a lot more like a child than she used to, and treats a somewhat bemused Mayuri (who is mostly going with the flow) like her beloved “mommy.”

Watching a 22-year-old woman act so spoiled around her parents irks Suzuha, to the point they have a yelling match in the TV repair shop. Both sides regret the fight and plan to apologize, but Suzu learns something crucial from it: her and Kagari’s memories of how they became separated are very different. 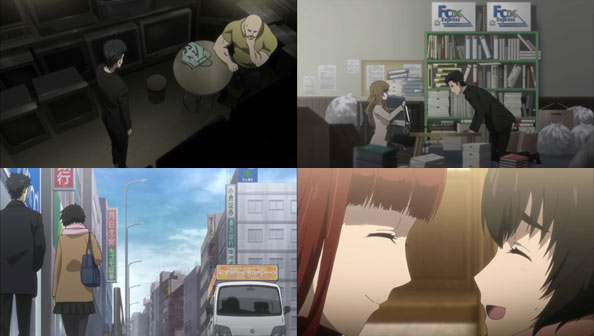 After conferring with Tennouji, Rintarou begins to suspect Kagari’s strange memory gap is the result of foul play: brainwashing and mind control, just as Kiryuu discovers…something less than 5km from where Kagari collapsed. It’s a clue, but it requires they take a long drive.

Mayuri decides to celebrate the restoration of at least some of Kagari’s memories by throwing one of her patented parties, which she tries to make a surprise, but with her early memories restored Kagari knows when her Mommy is trying to keep a surprise party secret. 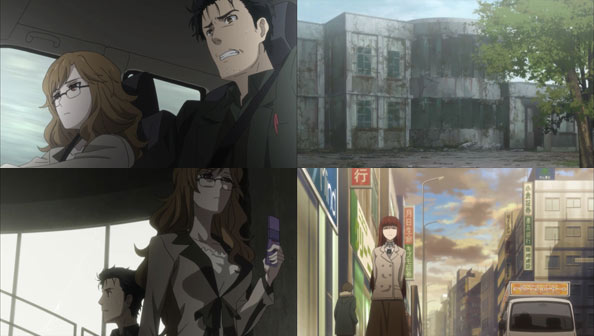 All the while, this ominous van drives around Akiba playing seemingly innocuous Mozart, and it’s clear the van is Bad News, whether it’s a van for kidnapping or simply for triggering Shiina Kagari. That perilous van hangs there, like Damocles’ Sword, over the remainder of the episode, as Mayuri & Co. prepare the party.

If the argument got the ball rolling on a theory about mind control, Kagari’s desire to properly apologize to Suzuha is the unfortunate side-effect. Kagari’s trip to the sweet shop isolates her from everyone else, who in hindsight are wayyy to loosy-goosy with her security at this point.

Indeed, in his desire for more clear answers about what’s going on, Rintarou is far, far away; in no position to keep her safe.

She hears the Mozart from the van (which is either planted there by “Them” to play specifically for her, or sheer coincidence) and more memories flow into her head: memories of being left with “doctors” by Mayuri, ostensibly to cure her PTSD, but the visits really comprise a kind of human experiment called the “Amadeus System”, of which Kagari is Sample #K6205.

The shock of this influx of memory sends Kagari into a trancelike state, and she drops the cake for Suzuha and her cell phone and wanders off who-knows-where, believing she’s hearing “the voice of God.” More likely, it’s the voice of those who did this to her to begin with.

Combined with Rintarou and Kiryuu discovering the facility, where Kagari was held in a cell for who knows how long, scrawling “Mommy” on the walls, Kagari’s vanishing from everyone’s sight (again) forms one hell of a thrilling cliffhanger for the second half of Steins;Gate 0.

While we may now know mostly what’s been done to Kagari, it remains to be seen who did it, why, and most important, how Kagari is linked to Maho and Leskinen’s Amadeus System. Was Kagari even a war orphan from the future? Will there really be enough cups and plates? We shall see…

There’s this song. It’s a song Mayuri sang to a young Kagari in the future, just when she finally became her legal mother. When the Kagari of the present hears the Mayuri of the present singing it, she loses consciousness. It’s not that Mayuri’s singing is just that bad—it’s quite lovely—but rather that Kagari’s brain is suddenly getting hit by some pretty profound aural stimuli. 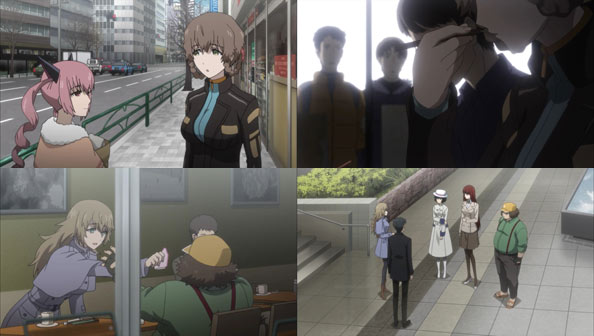 But when Kagari makes the connection between the song and her fainting spell, the question becomes where did Mayuri learn the song? That takes us on a rather wild ride: She heard it from Suzuha, who heard it from Yuki, who heard it from a woman in her baking class who turns out to be…Rintarou’s mother. Yet Rintarou himself, apparently the source, can’t remember singing it. To quote Alice, “curiouser and curiouser.”

Rintarou’s mom said he used to sing it to Mayuri to cheer her up when she was in her “reaching up at the sky at a cemetery” part of her life. They visit Mayuri’s grandma’s grave to try to spark Rintarou’s memory, but get caught in the rain.

While seeking shelter by a shop window, Kagari hears “The Magic Flute” (K620) playing on the radio and goes into a kind of trance, remembering when she once walked along that same street in her bare feet and pajamas. She’s almost hit by a truck (of course), but Rintarou makes a diving save.

While she’s out this time, something happens. Kagari runs to her mother’s arms; a blurry figure that she discovers is Shiina Mayuri. Waking up in a hospital room, she sees Mayuri by her bedside and immediately recognizes her as her one and only mommy.

Mayuri protests that she’s not a mommy, but, well, she just is. Or rather, she will be…just as Suzu is Daru’s daughter. Rintarou nods assent, and Mayuri goes with it, providing Kagari with the affection she needs. The plain credits roll as a very lovely rendition of the song is sung, at it seems things will end on a pleasant note.

Of course, this is the twist-loving White Fox we’re talking about, so after the credits we find ourselves on a train platform where that same barefoot pajama’d Kagari is singing the song, and a teenaged boy overhears it—a teenaged boy with the same color hair and eyes as Rintarou.

I’ll admit, I was a little confused by this scene, but maybe that was the point. Here is Kagari, who will presumably be adopted by Mayuri in the future, in Rintarou’s past, singing the song he’ll sing to Mayuri to cheer her up. Seems an awful lot like a causal loop to me.

That would be fine, except there’s a creepy white van parked near the platform, confirming that “Runaway K-6205” has been found. Are we watching past events here, or is Kagari in danger no matter where or when she is? Will the next episode continue in this world line, with “Macho Psychologist” Rintarou helping Kagari out? I honestly have no idea, but I can’t wait to find out.