We wrote a review of the first HG film, so there was precedent to write one for the second.

“Moves and countermoves”, remarks the hilariously-named head gamemaker Plutarch Heavensbee in the second installment of the Hunger Games film series, Catching Fire, suggesting and elegant and ultimately more effective fate for Katniss Everdeen as punishment for her act of defiance against the Capitol and President Snow in particular.

We’re reminded of the last episode of Valvrave, in which the Magius-infused Council of a Hundred and One fought a PR battle against a younger and less experienced foe. New JIOR lost and lost spectacularly. Considering the power Snow and the Capitol possess, you’d think arranging a similar frame-job for Katniss would be child’s play. 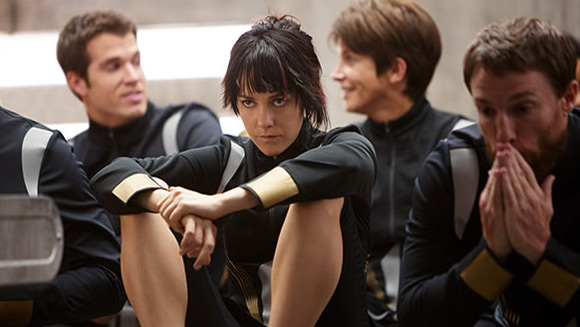 In fact, both the wildly successful Catching Fire ($670 million-plus as of writing this) and its wildly successful predecessor hinge on the audience’s ability to believe that Katniss has a Snow-ball’s chance in hell against the oppressive regime, especially after Poison-Berrygate. On the whole, they have, as did we. The districts are a tinderbox; Snow daren’t make any overt moves against Katniss lest the explode.

Unlike the Magius’ near total-victory on Valvrave last week in turning New JIOR into a globally-loathed nation of immortal monsters, Snow and Heavensbee’s efforts to cast Katniss as “one of them”—uncaring of the poorer districts and thus undeserving of their love—results in far more mixed results, for reasons we won’t go into because of spoilers. 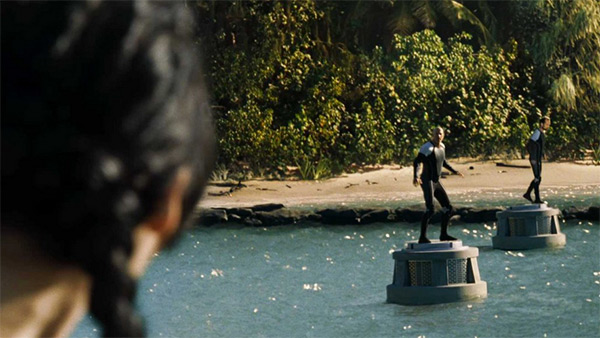 Like the first HG film, we went into this one having not read the book, and thus without any possibility of being disappointed by the adaptation. But after reading the first book, we’re reasonably certain we wouldn’t have been disappointed anyway. There’s much talk about the film being better than the book it’s based on, if for no other reason than the book’s first-person perspective makes it impossible for us to see what’s going on with Snow and Heavensbee where Katniss isn’t present.

But this was also a more focused, mature, darker film than the last one. The shaky-cam is gone, there’s much more lovely world-building, the fellow tributes are less cartoonish and one-dimensional. And while both films follow similar patterns early on, we were shocked and delighted by the different turns this film takes. Unlike Star Trek Into Darkness, it broke new ground. It was one of those rare good sequels. Also, you can never go wrong with Jena Malone.

While RABUJOI is first and formost an anime-review blog, we still endeavour to keep up with certain entertainment trends that may fall into line with our aesthetic. We’ve added our two cents to non-anime films before, so there is precedent. With that, a few things to know before we dive right into our impressions of The Hunger Games (THG):

First, we never read the book(s). We own the first one, but always prefer to go into a book-based film or TV series ‘blind’, as we do with anime series. That way, we avoid being spoiled by the source material and experience the piece not as an adaptation, but as an original work we have no prior knowledge of.

Second, We have seen Battle Royale. The internet is rife with comparisons to the the 2000 film by Kinji Fukasaku, with good reason: both films are about a deadly game in which teenagers are forced to fight to the death Some participants are more…eager than others. We could go on all day with other similarities, but we’ll give THG author Suzanne Collins the benefit of the doubt vis-a-vis whether she “borrowed” the story. Besides the fact artists borrow all the time, the two films are very different in execution, tone, and most importantly, audience (more on that later) and for diplomatic reasons we’ll forgo further comparisons. For the record, we liked BR more than THG, but not certainly not just because it was first.

Third: We’re suckers for strong female characters. Whether it be Leeloo, Major Kira, President Roslin, Hermione, Arya, Haruhi, or any of the many Miyazaki heroines, we can’t get enough of them. THG’s narrative, emotional, and spiritual core is a strong female character, Katniss Everdeen. We’re not sure why, but if the main protagonist were a dude, we wouldn’t even have gone to see the film.

Now, with all that out of the way; we liked THG. There are many reasons for this:

– Katniss. It can be argued whether Jennifer Lawrence is a brilliant actress (she does tend to stick with the default troubled pout) and a lot of her dialogue falls victim to subpar writing, but her performance works for us here because it’s so intimate. We’re right up in her face a lot of the time, listening to her ragged breath or seeing her shake in apprehension. Yet she keeps her composure and does what needs to be done. She volunteered for the games so her excitable little sister didn’t have to. She’s also a huntress, so she’s very good with the bow. This is Katniss’ film, everyone else is just living in it.

– The setting. There’s something very real and unsettling about it. The stark contrast between the postapocalyptic abject squalor and desperation of District 12 and the epicurian hedonism of the “Victorian Disco” capital district is unsettling for her and for us. After seeing Katniss freak out over a half-loaf of stale bread, suddenly finding herself on the FFVIII train before an elaborate buffet of delicacies is also a sight and a half to see.

– Call us desensitized, but whenever a film’s camera is far more squemish than its audience in a film about teenagers fighting each other to the death, there’s a problem. THG is a young adult book, and the film had to stay PG-13, but such a rating seems a bit hypocritical to the issues being addressed. The cameras seemed all too afraid to show any violence, leaving most of it to our imaginations. High School of the Dead, Blood-C, Another, and even less gory tales like Guilty Crown, all dealt with violence more deftly and honestly. THG film would rather avoid the bloody details wherever possible, and the drama and peril somewhat suffers as a result.

– The games themselves are very silly. You have 24 players, but they all rise out of the ground in a circle in front of a structure containing survival gear and weaponry. When it begins, they literally all run at each other, thinning the heard. It’s akin to everyone in a deathmatch spawning in the same place – in other words, a bit pointless. Perhaps this is how the games evolved over time to get things moving (many of the tributes are too young and weak to survive this initial herd-thinning) but jeez, why not give the kiddies a sporting chance? Also, the gamerunners all to often manipulate the game to bring tributes closer together so they’ll fight, in the form of forest fires, predatory beasts, and other obstacles. If you’re going to have kids fighting each other to the death, have kids fighting each other to the death. Spicing it up with cheat codes cheapens the proceedings.

-The too-oft-repeated pleasantry “Happy Hunger Games!” Sounds too much like “Happy Honda Days!” for us to take it seriously.

So yeah, we believe we’ve written quite enough about this non-anime film, and we should now get back to watching anime. But we’ll say the same thing about this film as we have about many other non-anime films: we’d love to see it as an anime. Though we kinda sorta already have…in Mirai Nikki.