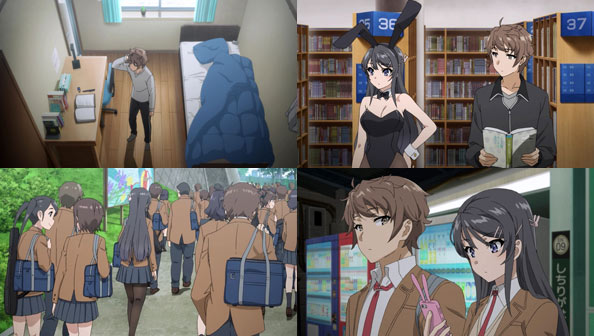 Azusagawa Sakuta wakes up on the morning of May 29th and opens a notebook entry from three weeks ago, when he supposedly met a “wild bunny girl.” But he doesn’t remember. Rewind to May 6th (my sister’s birthday), and while at the library, Sakuta indeed encounters a girl in a bunny suit no one else seems to notice.

He recognizes her as the famous and prolific child actor/model Sakurajima Mai, who also happens to be his senpai at school. Sakuta, derided by some as the class loner (he’s even told to stay away from a girl’s boyfriend so as not to tank his popularity), decides to open a dialogue with her, despite her telling him to forget all about what he saw at the library. 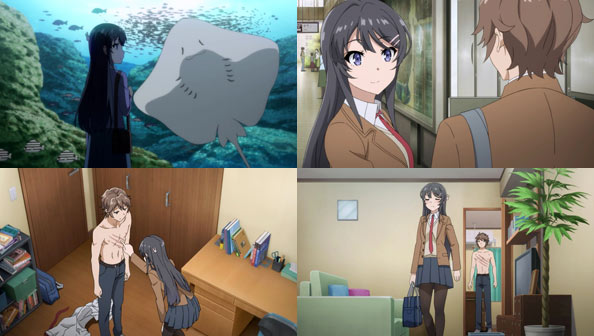 Actually, Sakuta helps her out a bit, deflecting a gawking photo-taker. Even if she’s “used” to such occurrences, he can tell they’re the kind of thing that wears one down. Sakuta is partially ostracized due to a rumor about him putting people in the hospital. Rather than dispute or fight for himself, he gave in to the “atmosphere” he believed is was pointless to fight, like trying to fight back ocean waves.

Mai confides in Sakuta that she’s been becoming increasingly invisible to the people around her, such that even when she’s standing right in front of them and talking, it’s as if she’s not there at all. Sakuta identifies her predicament as “Adolescence Syndrome”, something that, while scientifically dubiuous, is still something that is clearly going on with Mai.

It happened to Sakuta and his sister Kaede as well. Kaede suddenly received bruises and cuts after being bullied online; Sakuta woke up one morning with a huge gash as if from some kind of three-clawed monster; it put him in the hospital, and the “hospitalization incident” rumor took root from there. 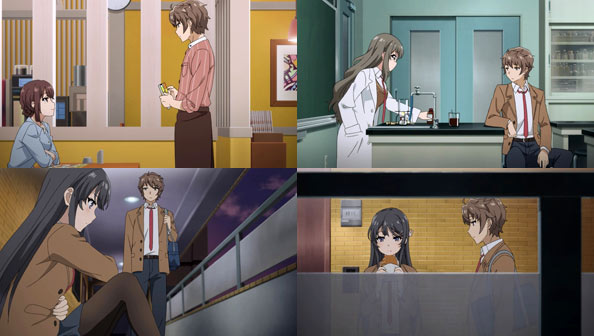 When Sakuta digs too deep too soon into Mai’s situation, she flees in a huff, and he ends up interacting with a television announcer eager for his attention and a science-y girl whom I’m assuming is a childhood friend of his. The latter brings up Schrodinger’s Cat—seemingly obligatory in these kind of shows—but reiterates that Adolescence Syndrome is something she can’t get behind, simply because science won’t support it.

Of course just because something is beyond the ability of science to explain doesn’t mean it doesn’t exist, just as Mai doesn’t not exist simply because people can’t see or hear her since she went on hiatus. But there’s an ominousness to knowing even the Sakuta of May 29th has all but forgotten Mai; hers is a continuously worsening condition.

It’s already so bad it’s hard to buy food…and she can prance around as a bunny girl without anyone noticing. But at least for now, in early May, Sakuta does notice. Perhaps if his future self keeps reading his past self’s account, he will remember her.

I honestly didn’t know what to expect of Bunny Girl Senpai; only that anime with such long titles often aren’t that good. But I can state with reasonable certainty that it’s not bad at all. It offers a clean, crisp presentation with an immersive soundtrack, natural dialogue that doesn’t get too lofty, and intriguing supernatural elements within an otherwise ordinary world. Color me intrigued! 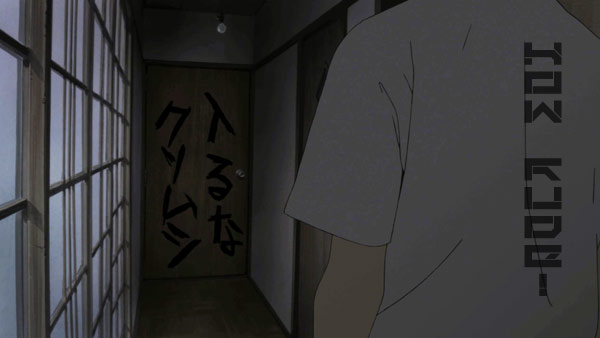 After staying up all night writing his essay to Nakamura, Kasuga tries to offer it to her while she’s walking home. She refuses to take it or speak to him, so he reads it to her as he chases her, until a car nearly hits him and she gets away. He rushes home to find Nakamura’s address, and when he goes there to drop the letter in the mail, he bumps into Nakamura’s dad, who invites him in and for dinner. Kasuga asks to use the toilet, but comes upon the door to Nakamura’s room. He turns the knob and enters…

“Girls can be difficult,” says Nakamura’s dad, who lives in a small flat, we’re assuming it’s his mother’s, who lives with him. He divorced Sawa’s mother when Sawa was just five, and he still can’t understand what’s going on in her head. Not that having a stable mother figure would have changed the way Nakamura is (daughters – and sons – are just as likely to equally “hate” both parents during their teenage years), but we’re a little relieved she doesn’t live in squalor with an abusive/drunk father. By all outward appearances, Sawa and her small family are like night and day.

Of course, like Kasuga, we still know very little about the details of Nakamura’s life, despite this introduction to her family. But assuming there’s no hidden unpleasantness, perhaps at this point it is Nakamura – Sawa – who is being backed into a corner by Kasuga, like she did to him. She pushed him so hard to be the deviant she wanted him to be he ended up disappointing those unrealistic expectations. Now he’s pressing hard to remain a presence in her life – any presence – as long as she doesn’t feel alone. Without necessarily intending to, he’s tearing down her walls of swear words and silence and scowls. And she fears those walls falling as much as he feared his.