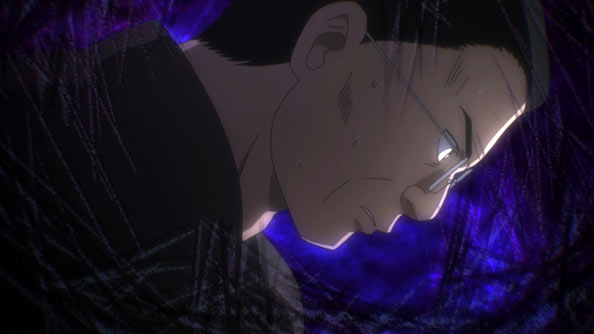 Last week Harada Hideo looked like he was doing absolutely all he physically could to maintain a six-card deficit with Arata, and then his knee seemingly gives way. The surging, crackling pain is ably expressed by a nest of rough crayon scrawls. But this could be his last chance at claiming the title of Master, so he plays through it and ups the aggression of his moves.

In doing so, his hands move before the rest of his body, resulting in Harada taking a nasty spill more than once that unsettles the entire game. As expected, Arata isn’t able to resist being the good guy that he is and help Harada pick up his cards, and he doesn’t call out Harada when he faults.

He also reverts to following the edicts of his grandfather in seeking balance on his right side. That ends up being such a critical error that it couldn’t even be said Arata lost the match playing as himself; he lost it too closely emulating his gramps…and by being too nice to an his mentor. 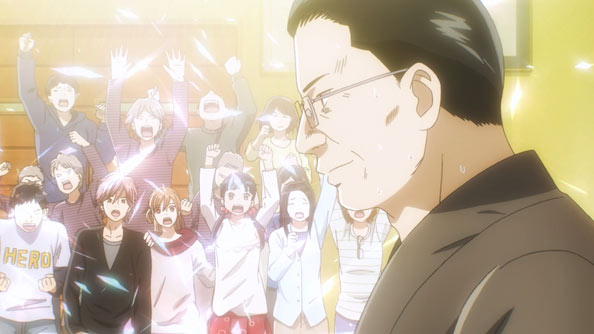 Still, it’s those kinds of things that separate the young from the old in a game like this. It was certainly touch-and-go with a couple of questionable calls and lucky breaks, but Harada Hideo beat Arata fair and square. Frankly, he needed the win more than Arata, who is, after all, only 17 for cryin’ out loud.

Unlike Arata, Harada wasn’t related to an Eternal Master. He was also dealt a serious blow to his career when his medical duties sent him to regions of Japan where Karuta simply wasn’t popular. Harada waited decades for the right time—and the right reader—to claim his victory. And his students and peers are to a person so moved by his win they’re all in tears…even Kitaro!

Arata wonders if he fussed too much over the one card he had to have—the Chihaya furu card; the first card Chihaya memorized—leading to his fatal fault. At the same time, when Chihaya comes to congratulate him for a close and thrilling match, he comes right out and says I love you, then tells her he wants to play more karuta with her.

Chihaya seems stunned into catatonia and slithers off to be by herself, while Oe and Sumire are gobsmacked. Only time will tell if Arata’s simple words reached her and  how she’ll respond to them, if she responds at all. In any case, it was a damned brave, manly thing to do moments after one of the greater defeats of his life! 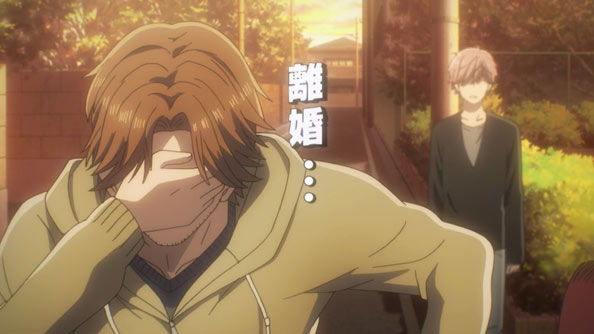 Taichi is similarly manly in returning to Suo the scarf he gave Chihaya, envisioning her as his “bride.” I’m sorry, but I don’t much care for the prospect of Suo stalking Chihaya, no siree! Thank goodness Taichi had the guts to tell him Chihaya was “his girlfriend”—and that those words seemed to spell the end of his creepy pursuit!

In his evening phone call to Shinobu to report the results of the playoffs, which amounted to two instances of veterans defeating youth, Suo uses fruits as a metaphor. While Arata—and perhaps in the Queen match, Shinobu—are “fresh apples”: cool, crisp, and sweet, Harada and Inokuma were “dried persimmons”: deep, complex, and of a flavor able to completely overpower the apples.

After receiving a bouquet from her adorable firstborn, Haruka wins the second match and becomes the challenger to the Queen. Not a lot of time was spent on their match, which is good, because while Haruka’s a perfectly likable character neither she or Megumu have very fleshed out characters.

During the break he got when Harada withdrew, Arata takes a stroll and thinks about what Chihaya whispered to her, and returns with the face of someone envisioning their imminent victory. 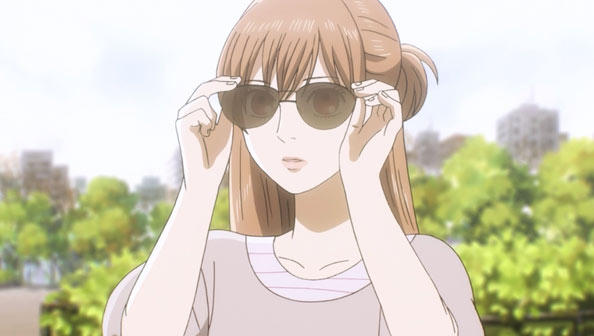 Chihaya also took the opportunity to get some fresh air in the park near the karuta hall, and encounters Suo. When she asks why he always gives out pastries, he says it’s because they contain vitamins, but when she asks why he speaks so softly, he wonders if that’s all she wants to ask him. He’s not wrong on that point.

Chihaya wants to ask him karuta questions she’ll probably never get satisfying answers to, but even something from the guy could prove useful. Unfortunately, Suo takes Chihaya’s attention the wrong way and repeatedly tells her he doesn’t have a girlfriend!

When the third and final match begins, what Chihaya said to Arata is revealed: he’s not going to beat their mentor just by being the same ol’ Arata. He has to channel his grandfather, Master Wataya, and everyone is struck by how much he succeeds in doing so, both in how he carries himself and how his tactics are constantly changing to foil Harada’s uber-offensive style.

By channeling a much older man—someone fifteen years older than Harada himself—Arata is able to take control of the game, but he also inadvertently lends his opponent a second wind, since Harada feels like a young man again (he was nineteen the one time he faced Master Wataya). He’s truly raging against the dying of the light, but disaster strikes when his knee suddenly gives out. Will the kind-hearted Arata subconsciously take pity and ease off his game, or will he do what has to be done to face Master Suo? 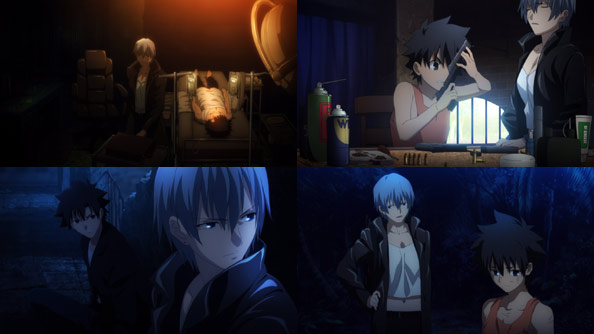 In Part 2 of How Kiritsugu Got So Messed Up, young Kiritsugu finds himself in a gender-swapped version of The Professional. Natalia is Leon, the ‘cleaner’ with a heart of gold who suddenly isn’t alone, and Kiritsugu is Matilda, the trauma-stricken, anger-filled youth searching for purpose.

After saving him, Natalia takes Kiri under her wing, gradually teaching him the basics. Before long he’s accompanying her on jobs, and if there’s one complaint I have with this episode (and it’s not a biggie), it’s that there’s really no transition between Kiri’s ‘kid’ and ‘adult’ voices.

What Nat continually drives into Kiri (whatever voice he has) is that her line of work, one’s own survival is the most important consideration. If you’re dead, it’s all for nothing. As a result of her training and care, Kiri becomes a highly capable and reliable apprentice. (She also eventually powders some of his ribs into 66 bullets).

The moment a Dead Apostle named Odd Vorzak appears in the tray of Natalia’s fax machine, I had the ominous feeling that it would be her last job, but while the destination was basically known, I still greatly enjoyed the journey. As a big job in which Kiritsugu plays a crucial role, flying to NYC ahead of Natalia and utilizing his bullets, there’s an auspicious tone to the proceedings.

While there are few things worse than getting the back of your seat kicked on a plane, what Natalia does to Vorzak is most definitely one of them. It’s a great scheme, transporting Kiri’s bullet into Vorzak’s back, and it’s executed perfectly. But it’s also all too easy, and I couldn’t help but think there would have been better, and more importantly safer ways to eliminate him.

Sure enough, while taking care of the bees in Vorzak’s luggage in the hold, all hell breaks loose in the cabin, as Vorzak was carrying more bees in his body. All 300 crew and passengers are quickly turned into vicious ghouls. By some miracle, Natalia is able to reach the cockpit, but it’s a long, tense trip to New York with those ghouls at the doo, and you can feel it.

Kiritsugu keeps Natalia company over the radio, in a beautiful scene that lessons the tension but still feels like it captures the specific emotions of the situation perfectly. As they talk, Natalia gets more an more sentimental, wondering if “playing at a family” is what caused her to screw up so badly, while Kiritsugu subtly talks of her in the past tense, sailing out into open water on one of the small, efficient little boats he loves to use. 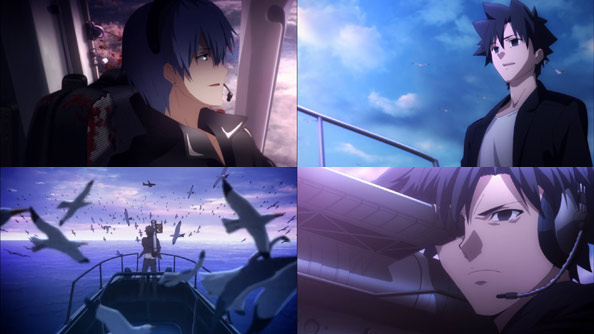 There’s a wonderful ambiguity to what Natalia’s particular thoughts are about the conversation she’s having with Kiritsugu, and if and when she realizes that he’s preparing to destroy the plane before it lands. After all, she trained him, and always knew he had way too much potential in her line of work, not to mention her edict that her apprentice think of his survival first and foremost.

Whatever she feels or knows, the reveal of the missile launcher just as the dawn arrives, with a flock of seagulls circling Kiritsugu as if he were the center of a storm—it’s all wonderfully staged and directed. And before pulling the trigger Kiritsugu makes sure Natalia knows: he was glad to have her as a mother.

As is usually the case with Kiritsugu, I can totally understand why he does what he does, even if it’s absolutely horrible: that plane could not be allowed to land just because Natalia is dear to him. The other 300 people on the plane weren’t people anymore, and if they get out into the city, many many more people would’ve died. Kiritsugu couldn’t allow that, so he does what he couldn’t do when Shirley turned into a vampire: nothing more or less than What Has To Be Done.

There’s such a dark, bleak symmetry to Kiritsugu killing his real father and adoptive mother as bookends to his transformation into the Emiya Kiritsugu currently fighting the Holy Grail War. Natalia was such a great character who came out of nowhere, it was sad to see her go so soon, but we were dealing with flashbacks after all, and I had no reasonable expectation she would survive them.

The break in the present-day story was abrupt (especially since I haven’t watched episode 17 yet), but it was well worth the detour to learn more about the key protagonist of the story. It also demonstrated that whatever the timeline or setting, Fate/Zero knows how to tell a damned compelling story.