Cross Ange is a dark, gritty, brutal, sometimes just-plain-wrong mecha series done right. As First Troop battles a battleship-sized DRAGON and its twenty-odd underlings, Miranda is simply told to keep back and stay alive, an order she cannot follow. Just when you thought, “well, maybe they’ll have Miranda resent Ange for Coco’s death later”, she dies too, just as she’s told not to!

But just so you know, the show isn’t content just with killing off rookie redshirts, as the highly capable, experienced bad-ass Captain Zola also meets her end in the fiasco of a battle where Ange first tries to desert, then freaks out and flies around, then slams into Zola’s Paramail, preventing her from landing the killing blow on the DRAGON. For her trouble, Ange gets to await rescue as the blood from Zola’s empty eye socket drips all over her cockpit. Frankly, I’m surprised more pilots didn’t lose their lives out there: those DRAGONS are exceedingly efficient at tearing people to pieces.

Even if it’s not all due not entirely to Ange, her selfish actions contributed greatly. She’s also gone and made even greater enemies of Zola’s three lovers: Hilda, Roselie and Chris. And Jill even sent her official petitions to several nations: all were rejected, as no one has ever heard of the Misurugi Empire or a Princess Angelise. She hasn’t just been plucked from her world: that world doesn’t even exist anymore.

Once healed up and out of her Gaultier Leeloo bandages, Jill has her lug the tombstones of the dead to their final resting places – the duty of the person responsible for their deaths. It’s here she learns her cushy mana-filled world is built atop the bones of the Norma, all fighting to protect a civilization that spits on them. When she learns fallen Norma get their names back, she starts to wish for death, to escape the hell and return to a place of peace, even if it is the afterlife – because she’ll at least once again be Angelise Ikaruga Misurugi.

With her first paramail trashed, Jill bestows Vilkiss on Ange – while awesome-looking, it’s hard to control and has seen better days; the perfect ride for someone with a death wish. But the Vilk is no lemon; and in giving it to Ange Jill seems to be challenging the voracity of her wish. 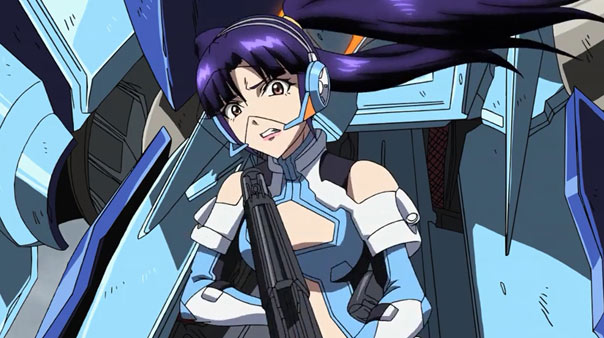 Salia is the new First Troop Captain…for better or worse, as she’s extremely rigid and by-the-book leader, probably a better lieutenant than captain. When they find the DRAGON and it’s revealed it’s basically acting as a decoy for a sea-to-air attack, Salia kind of just freezes. She’s only saved from the fates of Coco & Co because Ange lures it away — not because she particularly cares about Salia (or anything), but because she’s trying to die.

That is, until that DRAGON grabs her paramail and stares her down, and she remembers the dying words of her mother: “Live on.” Her ring, which was returned to her, glows, and when blood from her head drips upon it, there’s a reaction that’s both surprising and utterly un-surprising considering Ange’s natural course from now on. She’s not going to die there, because she realizes she doesn’t want to die.

To that end, she does what it takes to live on — wasting the dragon in a heated blaze of gun and sword attacks and ending the battle on an exclamation point, bailing out the tactically deficient Salia in the first sortie under her command. By the end, Ange is flushed with excitement, just as Zola said she’d get when she hit her back. Ange is still ashamed to feel this way, but she can’t deny she does.

She hasn’t been a knowing Norma long, and having not grown up as one doesn’t harbor the same deep scars, but she’s very quickly starting to understand what kind of living Norma must cling to. Even if it involves killing and a whole host of other nasty stuff, they have to take what they can get and find peace and solace however they can. 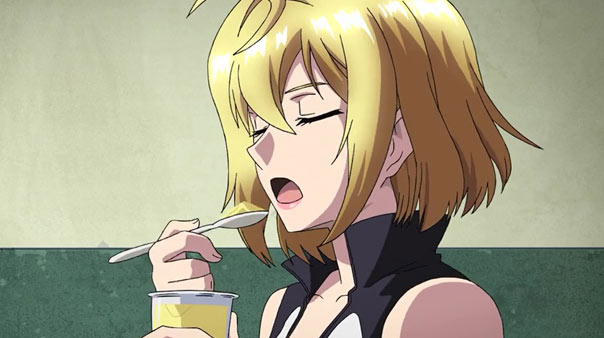 So Angelise cuts her long flowing locks and tosses them into the wind, to join her name, her past; everything else she’s ever had or been. She decides she will live on, as Ange, at any cost; not die as quickly or easily as her mother or young comrades. Then she takes the pudding Coco gave her out of the dustbin and dutifully chokes it down. It tastes disgusting, but it will nourish her soul. When in Hell, you savor every compromised comfort you can get your hands on.

Still, I can understand how this happened. I mean, I get it! No nipples doesn’t really change the fact that our fiery princess is being sexually assaulted by her commanding officer as ‘punishment.’ At least, I understand it would have less impact from another angle and nipple-or-not doesn’t change the obvious semi-rape so…maybe I’m getting ahead of myself? 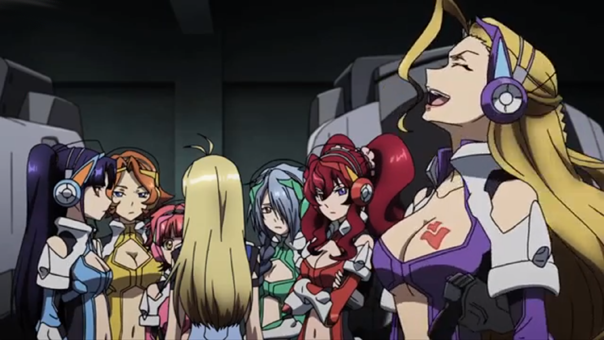 Our princess starts her day stuck in a Kindergarten class of sorts for Norma children being ‘educated’ for life (and death) as combat personnel. However, since reeducation is obviously not going to work, Arzenal’s command team decides to just throw her into front line combat and let life-or-death sort things out.

The horrors of this decision, and this setting, can’t really be blamed on any of the immediate characters though. Arzenal is a prison/military base that must fight or die to survive; its prisoners would be crushed by the mana-using mages that label them Norma in the first place, which means rebellion is impossible, and lets face it: the princess isn’t helping herself here. She’s a total jerk to everyone, especially her ‘fellow’ Norma.

Let’s get one thing straight: DRAGON stands for Dimensional Rift Attuned Gargantuan Organic Neototypes! This is a mecha based Sci-fi, people! None of that frilly magic fantasy stuff here. (except from where the Princess is from… er…ehem) 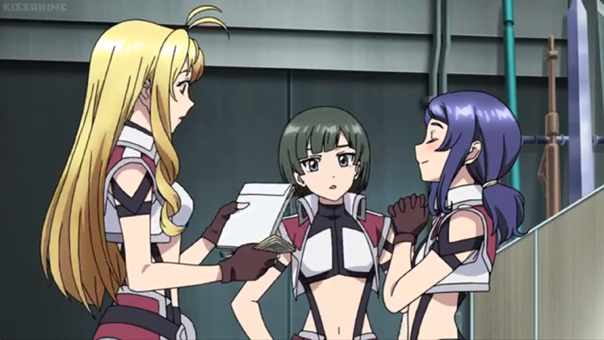 You like-and-are-nice to the princess? You are so dead girl!

As you may have guessed from the opening theme, Episode 2 introduces us to a truly dizzying number of characters. Each one of them is distinct and believable in what is basically a women’s only prison (only women can be Norma) but for the life of me, there’s too many to quickly recognize yet.

Still, I don’t think this will be a problem for long. I imagine after a few more of them are killed in brutal, swift and merciless ways, I’ll get used to the survivors’ names…

As for the xxxploitation of its characters, this too isn’t really a fault of the show. Everyone is a powerless prisoner. It seems obvious that the strong, the ones who control a sliver of power, would revel in dominating everyone around them.

Gross? Yes! But understandable and I imagine part of Cross Ange’s point: that the segregation and domination of the Norma has lead to making the Norma more horrifyingly outside the confines of society then they would have been if left alone.

Cross Ange is brutal, nasty, and creepily sexy in the way that Womens’ Prison Exploitation films in the 70s were but maybe — just maybe — it’s got a little more soul than that.

Right off the bat, Cross Ange: Tenshi to Ryuu no Rondo shows us that it can do mid-air transformable mecha battles pretty well. The fight  reminds me of some of my favorite scrolling shooters, actually. The Mecha is very Ray Storm/Crisis (PS1) and the space-time crossing dragons are very R-Type.

And these are good things! (If your gonna snatch someone else’s originality, you better take it from the best!)

More interestingly, Cross Ange plays its hand close and gives us no context for this fight. Instead, we quickly jump into a magic/mecha lacrosse game between our heroin “Ange” and some unimportant girls in pink.

While neither of these sequences seem that important to our protagonist Princess Angelize, they certainly caught my attention. Aping games I loved and a sport barely heard of outside of my home city? Color me intrigued!

However, not all is lacrosse matches in packed stadiums and life or death dog fights for our strong princess. There’s crushing racism and/or genocide afoot and she see’s nothing wrong with it.

And why not? The “Norma” are considered mutants for their inability to use “Mana of the Light,” which appears to be the underlying source of society’s technology and social stability. Sure, it’s tragic, but that’s the price to pay for Utopia!

Angelize’s viewpoint is kinda understandable but it’s immediately obvious that we’re seeing this world from a misguided viewpoint. Ange’s mother’s response to a well meant but still tirade-y “If only they were wiped out we would have even better peace” speech is all the confirmation we need.

Good intentions make the best grave and ash for royal families, after all.

Unsurprising to everyone but Ange, Ange is revealed to be a Norma herself. Unfortunately, the reveal is during her very public baptism and all hell breaks loose. Her mother is killed, her brother snatches the throne, her younger sister (a cripple?) faints and Ange is captured and sent off to Norma prison.

Not the best birthday ever but I think we can all agree, it could have been worse.

Probably should have told you about that. Doh?

Ange’s birthday takes a decidedly worse turn later that night. Outcast to a rainy dark All Women’s prison, Ange is informed that her life will now be spent as a soldier, her possessions will be confiscated and… well it’s hard to tell but she’s either anally searched or also raped. (it’s difficult to tell if Ange’s blood or her mother’s blood is pooled down her dress)

Cross Ange pulled a fantastic fake out with its mecha opening in that I made no connection that it was time-forward and the following lacrosse game was flash backward. While Ange was certainly more gruff in the dog fight, I just assumed it was part of what princess do and I didn’t expect the full twist that came at the end.

I would like to note that, for all its aggression and in your face trauma, this show has fully chosen to pull its punches. Even the opening, which is full of nudity, is… ‘tastefully’ devoid of nipples and genitalia. Like pumping a ton of ‘beeps’ into a song, I found the censorship more distracting than what it was censoring. (especially the still not introduced male character, who has a ken doll’s lack of junk between his legs)

Another odd note is that much of the dialog comes from the left channel and much of the music comes from the right. This was extra weird for me, since I wear a single-right channel headphone while reviewing (so people can get my attention in the office) and I thought part of the opening dog fight comms chatter was actually being translated from the battle song.

That would have been pretty awesome! 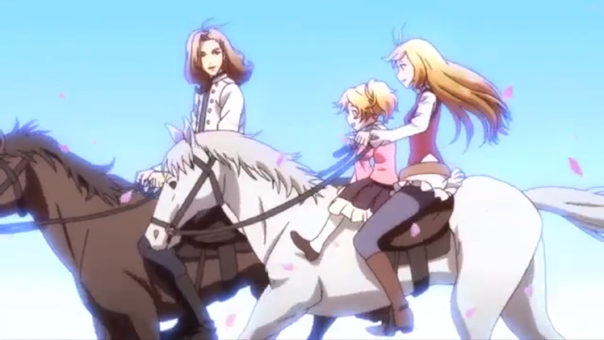 Cross Ange has good design, a simple but not too simple plot structure, many many many characters we haven’t been introduced to yet, and cool dog fights to come. It may also have a yuri element, if the end sequence has meaning, and the soft-ball censorship is a little weird.

Still, I’ll take that over the black-out treatment Terra Formars has received, which makes it difficult to even understand what’s going on on-screen.