Somewhere between the far-fetched lightning episode, the flashback episode that didn’t move the story forward, and the show not airing at all last week, I lost interest in this show. The first half of this episode did nothing to re-spark that interest.

The ham-fisted political commentary now dominates everything, leaving our characters nothing but pawns darting across a breakneck plot while two bad guys on opposite ends of the spectrum weave their respective webs. I’d have preferred more of RGB solving trolley dilemmas interspersed with slice-of-city-life moments of earlier episodes.

You said it, Cowboy Man. Nothing like a prequel three quarters into a show to kill the momentum. RGB, who flailed around independently last week during an improbably destructive thunderstorm. Rather than follow up on those events, we flash back to 1999, when Kanae was still working on autonomous driving tech with her colleague Kuchikiri.

When a car drives into their lane, the AI overrides Kanae’s steering so that Kuchikiri is seriously injured while Kanae and a pedestrian, a young Tsuzuragawa, are spared. When Kuchikiri comes to he finds himself unable to read words or numbers properly, and decides to reinvent himself with the name “Kuchikiri” now looks like to his eyes: 0th.

Kanae, who had just struck a business deal with Suidou Gouri, eventually becomes his wife and the mother of his kids…but the episode isn’t interested in explaining exactly how these two people with zero chemistry fell in love. But hey, Tsuzuragawa, guilty over what happened with 0th, decides to follow in Kanae’s footsteps even as Kanae abandons her research. Tsuzuragawa also meets Chikushi at college, where he once exhibited the same wannabe hero qualities as Shuuta (which explains his present-day cynicism).

Kanae also sets up the Takara Food Bank with the shopping district, which is how her kids Asumi and Kouki meet Shuuta and Ran. But while she’s chasing after someone asking if they need help, she ends up robbed and stabbed to death. Chikushi came between her and the first slash, but couldn’t stop the second. Gouri’s kids watch their dad break down for the first time in their lives, and I daresay he transformed into a different person in that hospital that night. 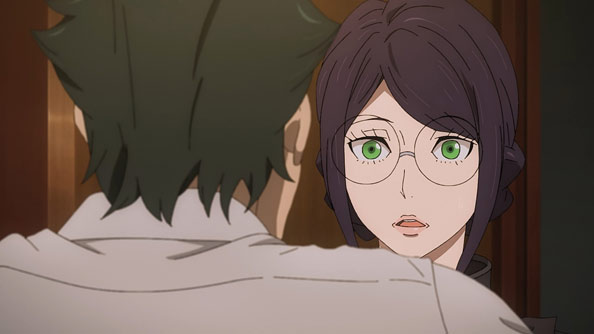 Determined to prevent crimes like the one that claimed his wife, Gouri turns to Tsuzuragawa to dust off Kanae’s research and complete it; the beginnings of what would become the KANAE System in the present. Tsuzuragawa probably knows right then and there that if Kanae couldn’t perfect the tech, she doesn’t have a prayer, but presses on anyway out of guilt and obligation.

Where Tsuzuragawa finds time to do this research while acting as chauffeur and personal assistant to the Suidou family is unclear, but as the years pass Gouri turns the resurrected Cornucopia Project as the cornerstone of both his mayoral campaign and his bid for the 24th Ward to join Tokyo. When 0th hears about this, he wants to fight Gouri, and I can’t blame him. Kanae’s tech was flawed and she knew it, but he’s going to use it anyway?

Perhaps too conveniently for the completion of Gouri’s descent, Tsuzuragawa is unable to make the system work without a human brain at its core, and as you’d expect, you can’t buy living brains on Rakuten. But when Asumi is severely injured at the school fire, Gouri decides to turn her into the 24th Ward’s “Guardian Angel”, which even for him feels like too large a leap to Super-villainy.

Ultimately, while this flashback episode colored in some of the broad strokes and made some connections regarding the adult characters of the show, the fact remains RGB are still flailing about in the present day, with one less episode for them to figure shit out. Meanwhile, Gouri’s monstrous decision was decidedly not justified here, while Tsuzuragawa comes off as the misguided protégé. The grown-ups have left a big mess for the kids to clean up!

P.S. Episode 10 is delayed; a recap episode is airing this week. 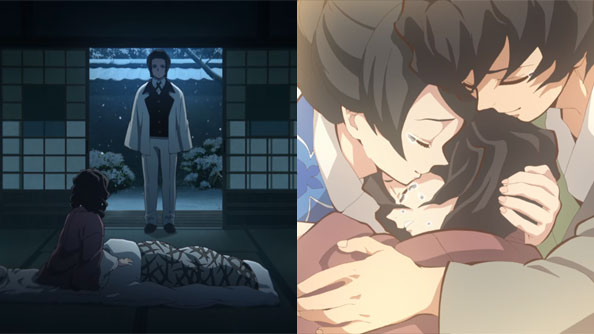 It’s always best to know about an enemy before they do bad shit and get killed for it, so Demon Slayer’s penchant for having the lives of demons flash before their eyes as their heads turn to ash isn’t the best approach for engendering sympathy.

Don’t get me wrong, Rui’s origin story is a sad one, especially how he misunderstood his parents’ intentions and how Muzan manipulated him, and I like how Tanjirou doesn’t apologize for sympathizing with demons who feel guilt and regret in their final moments, which Rui clearly does.

It’s less a matter of the content of Rui’s backstory and more a matter of timing. Call it Mount Nagatumo fatigue, but when Giyuu hacked Rui’s head off, I was ready to move on to other things. The episode, however wasn’t, and quite a bit of melodrama ensues.

Once Rui is gone, it’s basically cleanup time on the mountain, which is where the Kakushi come in. The unsung heroes of the Demon Slayer Corps, they provide a support role, treating injured frontline slayers like Zenitsu and Inosuke (who may now be facing a crisis of confidence) as well as the near-victims of the demons.

No sooner does Rui burn away than Shinobu swoop in to kill the only other demon in play: Nezuko. Of course, she’s not aware that Nezuko is different, and has been conditioned not to harm humans. She’s simply following her edict to slay demons, and when Giyuu stops her, she sites both the rules and repeatedly tells Giyuu that no one likes him.

Tanjirou and Nezuko makes a run for it, but they’re soon caught by Shinobu’s sister, who was part of the Final Selection and sports a very sweet boot-and-cape ensemble. Nezuko is able to get away and shrink herself to make for a smaller target, while Giyuu catches Shinobu and the pair prepare to fight each other seriously.

Thankfully, Crows from HQ provide fresh orders: they are to take both Tanjirou and Nezuko into custody and deliver them to HQ. That means for the time being, Nezuko lives. When Tanjirou wakes up, he finds himself surrounded by the Hashira (i.e. elite slayers).

Looking at these guys I couldn’t help but think of Soul Society’s Gotei 13 from Bleach, whose captains were a similarly eclectic, eccentric bunch who heavily personalized their shinigami uniforms. I look forward to meeting these weirdos and learning more about the Corps, while sincerely hoping the higher-ups don’t push for Nezuko’s execution or separation from her brother…

Shinbou lends Koyomi the oddity-killing sword Heartspan with which to challenge Hanekawa. Koyomi tricks her into coming to him by sending her an SOS text, using her better nature to draw her to him. He proceeds to tell her how he knows her personality has been intact the whole time and she’s been conscious of her actions. He tells her he’ll carry her stress for her, and even die for her. She slices him in half, but the oddity is injured as he his Heartspan inside him. Shinobu appears, heals him, swallows the sword and feeds on Hanekawa, drawing out the curse cat. Hanekawa loses all memory of the last nine days, and Koyomi decides he’s not in love with her, and will await someone else to fall for.

Whew, talk about an epic showdown, even by Monogatari standards. Sure, this final fourth of the Curse Cat arc is mostly talk, but pertinent, substantive talk. And the action that does take place is more visceral than ever, with Koyomi getting literally halved. We were hoping Koyomi would have some kind of plan going into his battle with Hanekawa Curse Cat, and he did, from the way he effortlessly summoned her (using her kindness against her) to the way he hid his trump card (swallowing a big-ass sword). Shinobu’s appearance  in which he scolds him then schools him on how to properly use it, was also deliciously awesome. (We also learn how she gets that helmet). Prior to the battle, Oshino tries to get Koyomi to understand: Hanekawa isn’t faultness in all this; in fact, he believes her entire situation is all her fault.

She lives every minute of every day in a flawless state of kindness and benevolence, he isn’t surprised her very-flawed parents couldn’t stand to live with her. (Koyomi even wonders if “family” is like an oddity to her.) But Koyomi doesn’t blame Hanekawa for being true to herself, even if it ends up hurting herself or others. After all, like the dead cat in the road, he was also an object of potential pity and sympathy as a recently-turned vampire whom Hanekawa saved, cared for, and taught him how to feel for others, without the slightest hint of pity or sympathy for him. She treated them as equals. And he’ll always be grateful for that, even if he and she will never be lovers. One other note: we like how the end of this miniseries butts right up against the very beginning of Bakemonogatari when Koyomi catches Senjougahara. Things seem primed to get right back down to business. We love endings that are also beginnings.