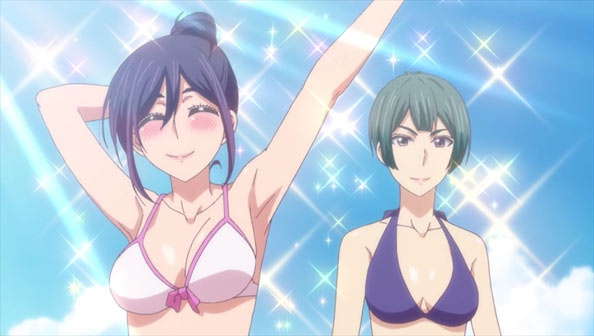 It’s a beach episode, folks, with a lot of familiar elements from that subgenre, including vertical pan up to unveil the ladies’ swimsuits. Shiny! It’s also a rare Shinomiya-centered episode, in which most of the inner dialogue comes from him as he struggles to impress Kae, and makes mess after mess of trying.

From accidentally launching himself into her boobs on the beach to having to hide behind his bigger friends as they scare off some creeps, Shino’s feeling particularly inadequate this week. When he knocks her down trying to save her from a snake, causing her to drop all her kebabs on the ground, it’s the last straw, and he runs off in tears.

Concerned for Shinomiya’s well-being, the gang chases after him, but he manages to get way far ahead of them for some reason, while Shina seems oddly un-knowledgeable about the environs of her family’s beach manse. The gag with the bridge that breaks but the gang (sans Kae) only “plummets” a little is funny enough, until you wonder how that fall (which is at least ten feet) didn’t hurt anyone. They can’t blame mushrooms this week!

Some odd choices about the journey to save Shino aside, I did enjoy how the two fujoshis embrace him for his “klutz appeal”, which ties into the themes of the show thus far. But it felt like someone jacked up Shino’s Klutziness and Anxiety Quotients to 11 for this and only this episode.

In trying to deepen the character, the show turned him into a outlandish caricature of himself. Of the episodes thus far that have centered on a single guy, Shino’s has been the worst. It wasn’t a bad episode, but I know Kiss Him Not Me can do better. 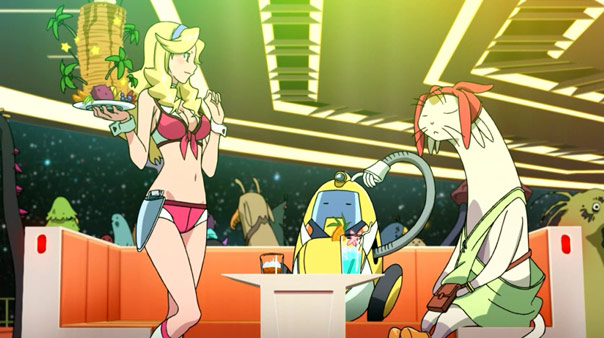 As anyone who watches knows by now, this weeks episode of Space Dandy was always going to be absolutely nothing like the last one. Rather than explore the chaotic possibilities of Dandys from far-flung parallel universes interacting, this week’s Dandy exhibits its whimsical, free-wheeling way with cause-and-effect…or effect-and-cause, if you will.

A seemingly innocuous argument between Dandy and Meow (on how some song went) leads to Dandy saying goodbye to his two long-time crewmates forever…before Honey can even serve him pancakes. He boards the Little Aloha and flies off to answer an invitation from a fan he believes to be a shapely rare alien girl. Of course, this is only a gross misunderstanding on Dandy’s part; something he’s so good at, QT finds and then enters him into a Misunderstanding Grand Prix, which he promptly wins in absentia. 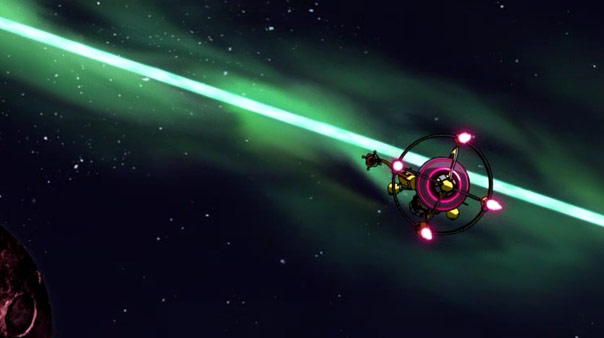 Much to Dandy’s dismay, the rare alien turns out not to be a hot alien chick, but “Ukeleleman” a somewhat frightening marionette-type golem with a very calm, dull voice; someone who collects smiles and wants Dandy’s for his own. While hardly the strangest Strange Alien-of-the-Week the show’s dreamed up, he’s definitely very random and more than a little offputting; not necessarily evil, but dangerously single-minded. 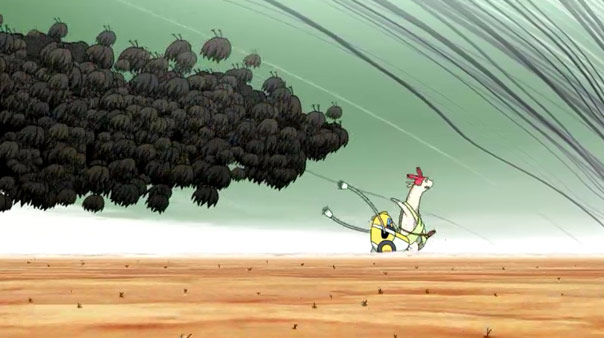 In fact, Meow and QT had already met him and fallen victim to his “hypno-petrification” tune, after locating where Dandy crash-landed, then transporting from one highly hazardous area to another until coming across Ukeleleman. The sight of his friends reduced to garden statuary keeps Dandy from giving him the smile he wants, and Dandy eventually runs off with them. His plan is to throw them into the Strange Phenomenon-of-the-Week: the River of Time that rings the planet.

First referred to by Dr. Gel as a means of capturing Dandy once and for all, the River is much like any other in that it’s made of a water-like substance, only the water represents time, its source the past, and its mouth the future. It’s also subject to the Pororoca phenomenon, meaning at times it flows backwards, returning the past to the present.

On a show Space Dandy that hits the reset button every week, a device such as the River of Time might seem redundant. Despite that, and despite the fact the actual practical mechanics of the river are a bit loosy-goosy, the execution is entertaining, showing us ducks turning into ducklings and then eggs, or a Space Battleship turning into a Galleon, as the waves crash. Dandy also gets to break out his surfboard. 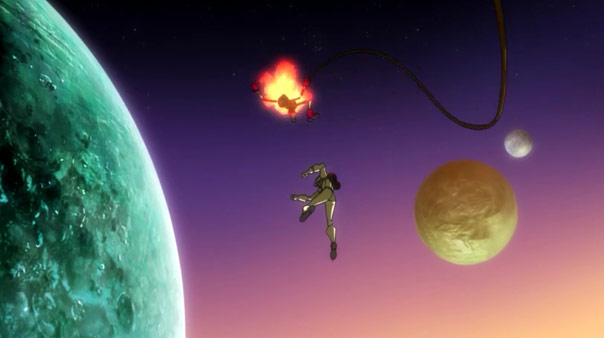 That battleship crushes Dr. Gel’s dropship, and his latest attempt to capture Dandy along with it. The final showdown between Dandy and Ukeleleman is muted and lacking in emotional investment—frankly, we’re glad to see the weird-looking bastard go up in flames. But it’s in death that he finally achieves the smile he’d worked his whole life to achieve. And when his ukelele drops into Dandy’s hands, Dandy is able to properly remember how that song went.

As expected, Space Dandy completely changes gears from a heartwarming friendship story to interplanetary diplomacy, as they crash land in the midst of the ongoing struggle between the two last survivors of two warring civilizations. It’s a very old sci-fi concept brought back to life by the show’s passion and knack for fresh storytelling, and unique in what differentiates the otherwise very similar factions: clothes. The Undies wear only boxers, whil the Vestians wear only vests…and n’er the twain shall meet.

Dandy and Meow reconnoitre and are both captured in quick succession by the aliens, in scenes spoofing Luke Skywalker’s capture by Tusken raiders. Ironically, the “droid” in Space Dandy, “QT” isn’t captured. That’s key, because on this particular world with these particular factions: only Dandy and Meow could have been captives…and they’re lucky enough to be captured by the side that favors their own clothing preferences. Dandy is actually most at home in his boxers, while Meow sports the far more Disney-esque vest.

The aliens themselves are funky designs with awesome voices, and the show makes a point to cross-cut their conversations with their captives-made-allies in order to accentuate how they have far more in common than different. One reason the war’s gone on so long is that they only fight about a minute a day in fighters, and have terrible aim. But their respective causes are quickly taken up by Dandy and Meow, so when they meet, they find themselves fighting on behalf of their new alien friends. More to the point, when the clock expires, both come away with mutual respect for each other. It’s very chivalrous and both sides play fair.

It’s also key that QT stays aboard the crashed Aloha Oe; in addition to staying above the fray and making repairs, she reiterates the overarching goal of being there in the first place: registering these two aliens. That can only happen if there’s peace, so Dandy and Meow set to work (in the aliens’ oddly romantic-looking bedrooms) convincing their friends to set their conflict aside. It’s win-win: the last Undie and last Vestian would get to experience what else the universe and life have to offer; while Dandy & Co. get a payday.

The Accords get off to a good start, with a treaty being signed, and hands shaken. But when it comes time to exchange clothing—a final gesture of differences exchanged rather than merely set aside—neither of the aliens can do it, even though the color of the star on their would-be new garb matches their skin (maybe this was done before in the past?) They take out concealed guns and empty their clips at each other, missing everything, then hurl progressively larger rocks at each other (returning to the most primal tactics of conflict) until they smush themselves to death.

With their dying breaths, each whips out the remote for their trump cards: orbital nukes that will assure mutual destruction. Unfortunately for Dandy and Meow, they’re not aboard the Aloha Oe when repairs are complete and the planet starts tearing itself apart. At this point it seemed likely QT would simply leave them behind to die, after promising to “never forget them”, a common refrain in such situations. But not this time.

The show had very casually set up a trump card of its own in the first scene of the episode—Dandy’s rocket surfboard—and Dandy and Meow surf the “Big Wave” Dandy been waiting for: the kind that only comes when a planet is exploding. It’s a thrilling, beautiful, joyful end (set to an equally lovely, upbeat song), but it’s also a little wistful, as it demonstrates what could have been had the red and blue aliens committed to peace, waved goodbye to their ten-millennia-old battlefield, and ventured out into the universe. There were two more surfboards, after all.