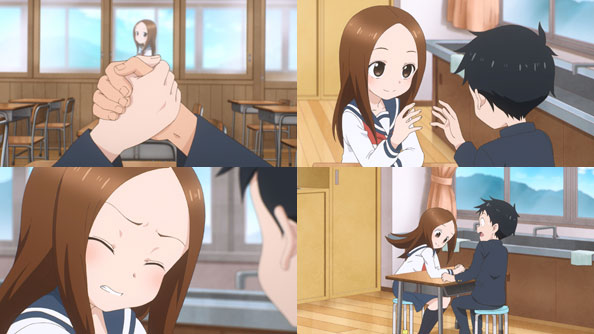 Nishikata is the best arm wrestler in his class, due to the fact he does three push-ups for every time Takagi teases him during the day. But all that extra brawn is for naught as long as he doesn’t exercise that most important of “muscles”—his head.

Case in point: Takagi genially challenges him to arm wrestle, and in the first round starts she pretends to be far weaker than him, and simply waits for him to let his guard down. In round two, Nishikata is done playing around, but is then flustered when she asks if he wants to hold hands walking home.

In both cases, Nishikata’s superior strength is neutralized by Takagi’s mind games. And yet all Nishikata will do as a result of his losses is do more push-ups. After all, he simply can’t predict every trick Takagi has up her sleeve. He could plan 100 moves in advance and she’d be ready with Move 101. 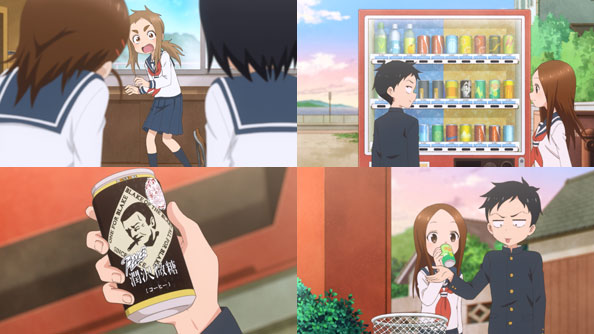 After Hina tries to make a big display of how mature and grown-up she is by staring out the window, sighing, and talking about the impermanence of things (mostly foods) which only leads to Yukari and Sanae laughing at her, Nishikata decides to show Takagi how mature he is by taking the advice of one of his guy mates (never a good idea) and drinking the bitterest coffee he can buy.

That coffee, clearly a non-copyright-infringing stand-in for Suntory BOSS, proves way too bitter for him to not make all the faces one expects of someone who hates coffee, and in addition to being a Teasing Master Takagi is also mastered reading Nishikata’s face.

She does the practical (and truly mature) thing and buys a delicious melon soda, and offers Nishikata a sip, pointing out it would be an indirect kiss. To accept her offer would actually show maturity on his part, since an indirect kiss shouldn’t be a big deal to a grown-up.

Not to mention Takagi isn’t about to stop teasing him even if he convincingly enjoyed a can of BOSS; she’d simply devise new ways to tease him. It’s what she does. 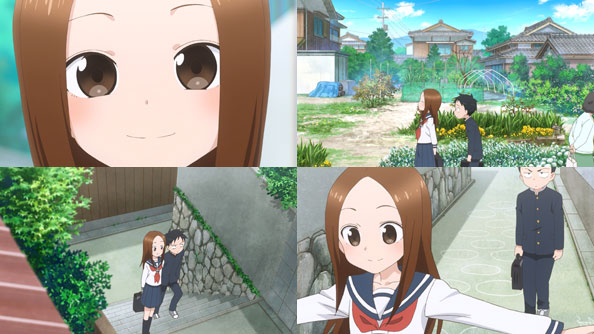 Finally, Takagi meets Nishikata for their walk to school, but for once without her bike. He recalls her saying something about the brakes on their last walk, and assumes that’s the reason why, but Takagi warns him that if he guesses wrong it’s an “instant loss,” so he ponders other reasons as they take detours not possible with a bike.

Ultimately, Nishikata sticks with his brake answer, thinking Takagi was throwing a bunch of other potential reasons (stairs, hopscotch, cats) as a distraction. But of course, he’s wrong. Takagi actually had two genuine reasons that he did not consider. One, she didn’t bring her bike because she wanted to watch him struggle to determine the reason. Two, she actually did, and does, want to hold hands with Nishikata, hence no bike.

Of course, whether it’s dropping her -san or sipping from her can or holding her hand, Nishikata remains nervously reticent, despite now being a second-year. Because he makes her laugh so much, this doesn’t seem to bother Takagi so much, but as Hina says, nothing lasts forever, so one would hope that applies to Takagi’s patience.

At some point, Nishikata is going to have to reckon with the fact a girl likes him, and he likes her back, and pursuing that is more important than winning and losing silly games.

Welcome to the first of RABUJOI’s new “AND NOW…” Series, inspired by a similar segment on HBO’s Last Week Tonight with John Oliver.

We begin with the common anime practice of having characters purchase, offer, and drink canned and bottled soft drinks — often spoofs on real brands — from the vending machines ubiquitous in Japan. Being in an anime is apparently thirsty work!

Here’s just a small sampling of the practice from our Fall 2014 shows: 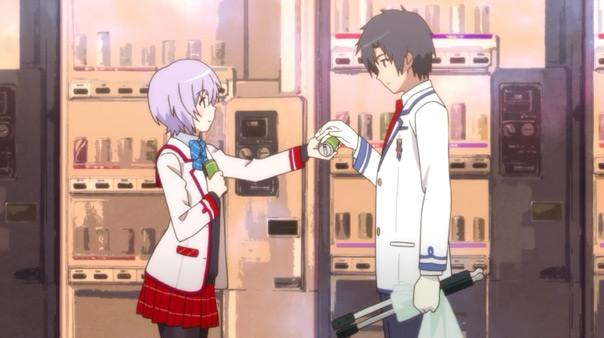 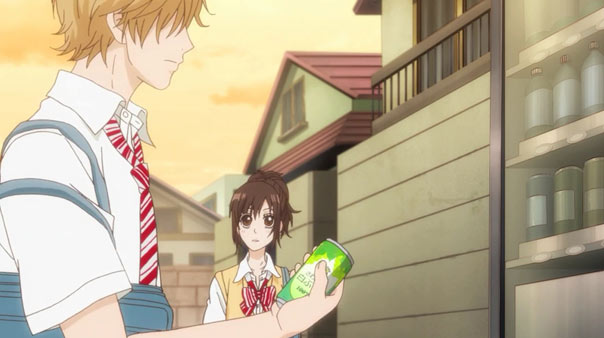 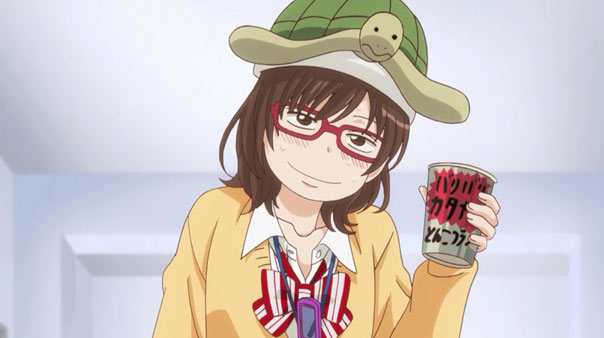 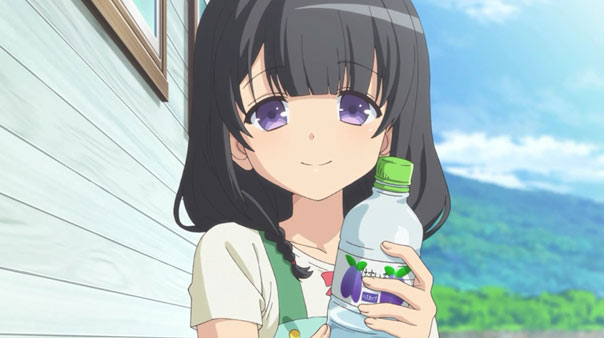 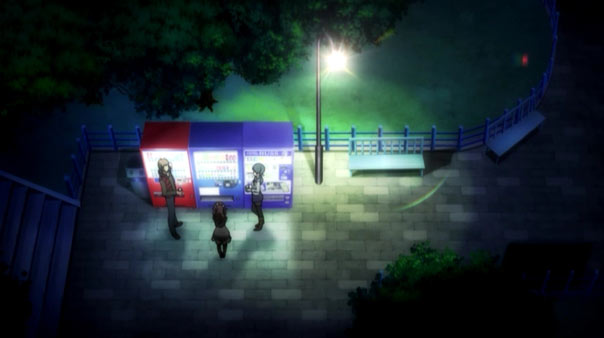 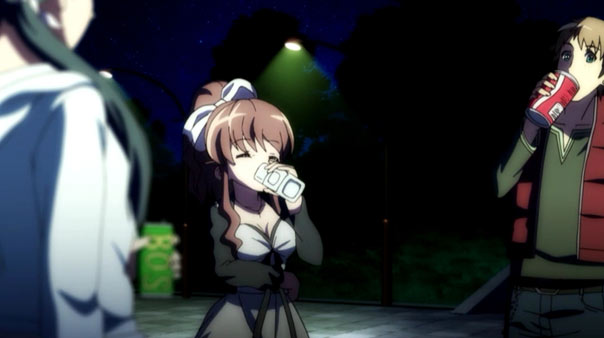 This has been AND NOW…!