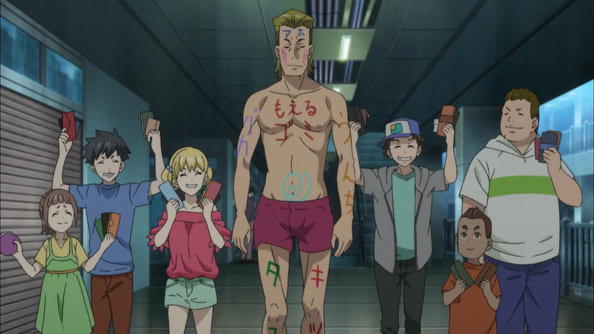 No mystery to be solved nor rakugo to be performed this week, just a heaping helping of Kabukichou slice-of-life featuring former yakuza Kobayashi and the Irregulars, a gang of kids with nowhere else to go that he helps to keep fed, even when they steal his clothes and draw on him when he passes out from overdrinking. There’s a connection with those two things: Kobayashi left the yakuza because he was too nice. 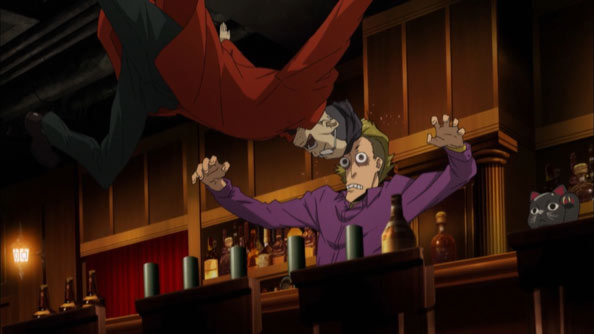 “Nice” isn’t how you’d describe his former associate, a mid-level thug named Sugimoto who is always in and out of prison. More like, Sugimoto is a deeply weird dude, as demonstrated when the kids find him trying to “cut the sun,” and a lot of other erratic behavior.

He also has an affinity for rapping about himself and “Tama”, as he calls Kobayashi (i.e. “kitty”, referencing his kind heart). When one of the kids steals Sugimoto’s protection money, Sugimoto and his massive brawny pal go after the kids. 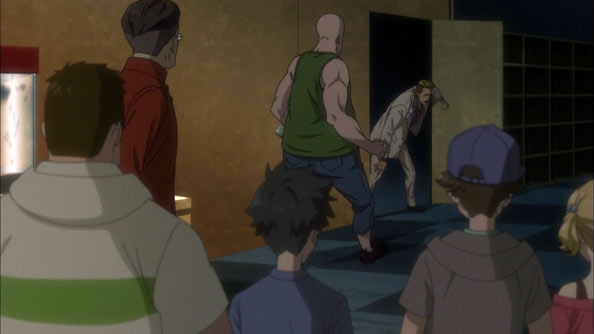 Moriarty manages to locate the kids’ HQ, an old bowling alley, and Kobayashi rushes in under another moniker: Torataro. The night Kobayashi “betrayed” his fellow yakuza was when he took pity on a struggling mangaka who owed money.

He was just happy someone in the world cared enough to dream about something bigger. That inspired Kobayashi to become a detective, while his kindness inspired the mangaka to write a story that got published, featuring Kobayashi-like character who protects the weak.

Kobayashi ends up in a potential self-sacrificing spot, but he’s bailed out by Moriarty, Watson, Sherlock, and Kobayashi’s former boss Kaneko and his men, who put Sugimoto in his place. It’s chaotic elements like Sugimoto that underscore the fragile equilibrium of Kabukichou.

That balance of crime and kindness, of trouble and fun, is something that must be protected and maintained lest it slide too far to one end to the other. It’s why Kobayashi intends to give the candy shop owner his protection money back and treat the kids to whatever they want…even if they steal his clothes and draw on him again. You can’t cut the sun, but you can shine a little into the shadows.