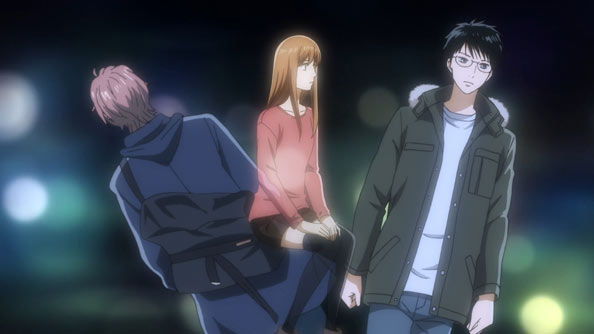 Chihaya may be frustrated that Taichi stayed behind to play in the Takamatsu Memorial Cup without telling her, but she shouldn’t be surprised; Taichi’s always been like this. Rather than dwell on how much further Taichi might progress as she’s on the train home, she needs to think about how she’s going to become Shinobu’s preferred opponent in the next Queen tournament.

Chihaya registers for the co-ed Bunkyo New Year’s Tournament, which after the two biggest events in karuta truly does herald a new year, despite it being held on Jan 11th. We unfortunately spend some time with Retro-kun, about whom I could really care less; his goofy design, voice, and mannerisms belong in a different show and undercut any dramatic weight he might emit.

Back in Kyoto, Taichi is paired up with Arata, but no longer how late at night Taichi stayed up practicing in his hotel room, there’s no way Arata is going to lose to him; not after the challenge he issued to Suo (who actually shows up to watch their match). Taichi can only claim 4th Place, while Chihaya shows Sudo how much her game has matured by beating him to win the whole damn thing. It’s officially morning in Chihayamerica. Time to get to work.

“This test is sounding much more complicated and difficult than I thought it would be.” You and me both, Horikita! The details of weeklong survival trip that pits the four classes against each other is indeed are many and complicated; one might even say convoluted, to the point of ungainliness.

Much of this episode simply sets up all of the various rules and ways of spending, scoring, or being deducted points, but it’s a lot to keep track of, and the episode itself doesn’t do the best job of organizing everything in any kind of order. Instead, it lays out some rules, the students mill around in the woods, and then they lay out some more.

There’s also the fact that Class D is made up of twenty students, and yet we don’t really learn or get any kind of impression from any but the ones we already know: Horikita and Ayanokouji, the three bad apples, Hirata and Karuizawa, etc. The rest are kinda just there.

I appreciate the fact that everyone in the class can agree to appoint Horikita as their Leader (a position with both advantages and potential pitfalls requiring both responsibility and discretion).

What I did not appreciate were the incessant sexist allusions to girls being weaker, more delicate, and somehow not as cut out for roughing it as the boys. Out of twenty students, you’d think one or two of the girls would be outdoorsy types like Ike.

On that same subject, what the hell is the deal with the toilet situation? Have these kids not heard of these things called holes that you can dig in the ground to do your business? I realize a lot of these kids are rich and sheltered, but still…

Somehow, some way, the girls manage to survive the first day (/s), and Hirata manages to work out a reasonable number of points the class can walk away happy with: a floor of 120 out of the 300 they start with. As for the ceiling, well, it all depends on how many leaders they can identify, how may “spots” the possess for how long, and how much food and water they can take from nature without spending points on rations.

They also have to be careful not to lose too many points to deductions, and in this, right off the bat they stand to lose 30 points when Kouenji, after doing his Tarzan thing all over the island, craps out on the rest of the class by returning to the boat. I’ve no idea if he’s just out of the game or has some other plan (probably the former), because all he does is strut around saying “beautiful.”

At least with the majority of the test’s rules out of the way, we’ll see more execution next week. But seriously, CotE: dial back the male chauvinism a bit, if you would. It leaves a bad taste in the mouth.

This week begins with a production of Icarus in an unfamiliar venue—did the school have such a sumptuous theater?—and an ultimatum from Chabashira-sensei to Ayanokouji: try, actually make an effort to get into Class A…or be expelled. Someone outside the school wants him gone, but Chabashira is willing to let Ayano stay around—but only if he plays ball and makes it worth her while.

We then learn the entire school is not at school at all, but aboard a gargantuan luxury cruise ship. The luxury part comes naturally to the higher-ranked classes, but Sudo and his crew stick out like sore thumbs, while still others (Ichinose and Hoshinomiya-sensei) avail themselves of the spa facilities.

The only two people neither having a good time nor trying to have a good time are—you guessed it—Ayano and Horikita. They’re weary. This whole cruise has been free and there’s been no explanation for its existence…so what’s the catch?

While the two are sitting at a bar alone together, pondering that question, Ryuuen shows up and calls Horikita out for the camera prank that saved Sudo. Ryuuen is overly familiar and grabby, and returns Horikita’s disgust with a promise she’ll be seeing a lot of him.

They are interrupted by a very ill-tempered classmate of Ryuuen’s who is apparently sick and tire of “how he does things.” She’s flung aside by Ryuuen’s bodyguard Albert, but doesn’t give Ayanokouji anything when he asks what’s up, so all he and Horikita know is that there is tension within Class C.

Some use the cruise as an excuse to try to nab a romantic partner: Ike with Kushida (he chokes and settles for first-name terms), Sudo with Horikita (never gonna happen), and Sakura with Ayanokouji (she hesitates and is interrupted by Kushida).

Because Sakura can sense Kushida is hiding something behind her public image, she skitters off, and before long, Ayano also tires of her friendly girl act and starts to take his leave.

Kushida then changes tone for the first time since the first time, but doesn’t threaten Ayano, just gets him to acknowledge he’s weary around her, while she’s…well, she just doesn’t like being left alone so soon after showing up.

The episode’s title, “Abandon all hope, ye who enter here” from Dante’s Inferno, provides some early insight into what we and the students are in for. Those are the words inscribed on the gates of Hell, and Hell, albeit in the form of a gorgeous island, seems to be their destination (though none of these kids are anywhere near the middle of their lives).

Once they spot that island, the faculty announces a week-long survival test will take place on the island. I imagine then, that we’re in for some Lord of the Flies kid self-rule adventures next week, with all of the different character and class dynamics touched on this week and in weeks prior will come into play in an all-new, less academic setting. I look forward to it.

Mizusawa plays Homei in the Tokyo Regional Finals, but even though both of them will move on to the Nationals, both Chihaya and Retro are desperate to win it. Retro chose to play Mizusawa’s order straight despite his new president Kameda’s desire to play a low-energy match. Kameda faces off with Chihaya, but she spends most of the match trying to emulate Wakamiya Shinobu’s silent style. Nishida is the first to lose. Chihaya decides to try combining the strenghs of Queen Wakamiya and Master Suo, taking a card from Kameda with authority.

Men should never begin a sentence with the word “but”!

When he hears his players bickering, Mashima remembers his overbearing mom’s words, which are good ones to live by even if you’re not a man. Saying “but” is like saying the world owes you a favor. Life isn’t fair; you get over it and move on. Mizusawa is already moving on, but they still face Hokuo. Last year, they owed part of their victory to their player order working out. Kameda, ever focused on the next card; the next match; wants to slip into the Nationals like an old man into a tub; nice and easy. Not so fast, says Retro-kun: there’s something to be said for preserving one’s pride.

This is an old and venerable game steeped with honor (Mizusawa’s hakamas are a very visible reminder of that); applying modern pragmatism…cheapens it a bit. This week, Chihaya is figuring things out. She is gunning for Wakamiya, who may well still be out of reach, but that doesn’t mean she shouldn’t try. That means a lot of her match with Kameda involves trial-and-error. We also liked how former Hokuo ace Sudo is the reader, and how Oe, at least briefly, trusted him. It’s good to see other players doing well.