It all starts with Pecorine not wanting Karyl’s breakfast to get cold. When Karyl doesn’t answer her door, Peco fears the worst and burst through her window like an action hero, damaging her favorite stuffed animal. Turns out Peco has never heard of the concept of “personal space”, and assumes it’s something to eat.

Kokkoro is confident she can mend the plushie, so she, Yuuki and Peco take a trip into the city to buy materials. The three don’t have any luck and split up, and that’s when Yuuki is attacked by a Shadow that was attacking someone else, and is rescued by Shizuru, his…big sister? Yes, that’s right: throughout most of his adventures he’s been watched over by Shizuru, along with his little sister Rino.

After cleaning up her room, Karyl heads into the city to pay Her Majesty a visit, and even picks some pretty white flowers for her. She finds her boss surrounded and preoccupied by numerous Shadows that she seems to be modifying to be even more dangerous, and their dark presence wilts the flowers, which the boss calls “filth.” Jeez, Karyl was just tryin’ to be nice! 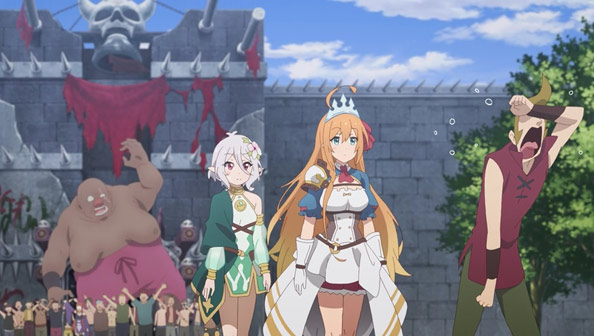 When Kokkoro heads to a fountain to wet her handkerchief so she can clean the hot dog ketchup from Yuuki’s face and clothes (whew) she ends up meeting a jealous Rino, who learns that Kokkoro is Yuuki’s servant. But Yuuki suddenly vanishes. Fearing the Shadows got him again, they follow rumors to the food critic’s lair (who is more grotesque than ever) and end up rescuing Charlie, not Yuuki.

Turns out Yuuki was hiding from one of the demon girls from the hospital when he spotted a quest to acquire a rainbow silkworm, and completed it all on his own, off-camera. I guess he’s more capable alone than we thought! Shizuru and Rino end up receding from view after confirming that despite having lost his memories of them and a lot besides, their brother remains a kind and decent lad, and has found some good friends.

Karyl returns home in a far worse mood than she left, and feels even more down when she finds the guild house empty. However, Yuuki, Pecorine and Kokkoro arrive right behind her, proudly carrying her fully-repaired stuffed animal. The look on Karyl’s face says it all: the dark empty place she’d walked into was just a house; these three friends make it a home. And perhaps her increasingly unhinged boss doesn’t deserve her continued loyalty. 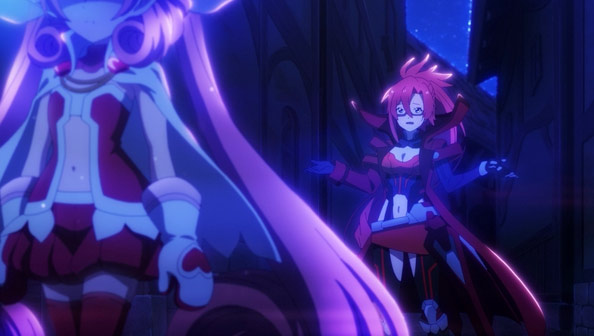 After the end credits we meet the red-haired woman who sent Shizuru and Rino to observe Yuuki, called Queen Labyrinth by her fellow “Seven Crowns leader” Metamorregnant. They seem to both be investigating “Omniscient Kaiser”, but Meta isn’t yet interested in collaborating. Not much to say about these two; hopefully we’ll learn a little about them and how they fit into the bigger picture in the penultimate episode next week.

Ore Monogatari!! isn’t one to stray too far from its main couple for too long, so it’s back to the Rinko x Takeo Show this week, and as expected, Nanako and Kurihara’s quick first kiss puts pressure on the two, if for no other reason than kissing is now on their minds. Takeo is content to wait until the “autumn of his third year” of high school, but Rinko wants it to happen sooner. A lot sooner. Like, New Year’s, which is the day after she asks Suna and Ai for advice. Which is also Takeo’s sixteenth birthday. 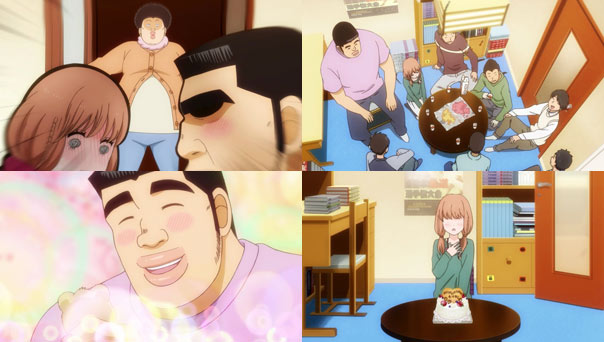 This is one of those episodes that brings up a certain fact about a couple—like, for instance, how they haven’t kissed yet, at least while both parties were awake—and thus commits to giving the audience some payoff. That is to say, if this episode had ended with no kiss, due to whatever circumstances (and early obstacles like Takeo’s prying mom or Takeo’s horde of childhood friends), that audience, i.e. me, would have been most displeased. I want mah damn kiss, yo. 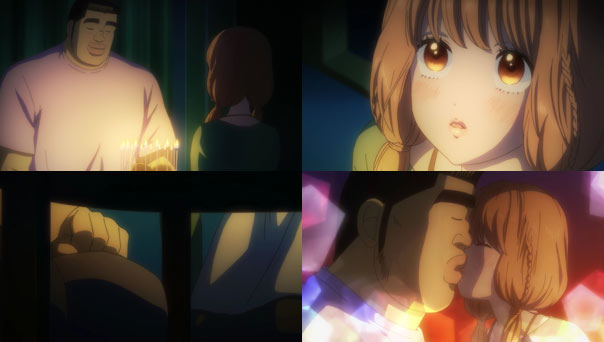 So I was a bit tense about the couple’s day together—right up to the moment Rinko shifted over to where Takeo is sitting and planted a kiss on him while his eyes are closed for his birthday wish. HOWEVA, it seems like Takeo didn’t notice the kiss at all, which makes sense: he’s a bit dude with big lips; if you want to kiss him, you’ve got to go all out. So, would Rinko’s little closed-eyes peck be all we get this week, after Rinko promised Takeo she’d give him a birthday he “wouldn’t forget”? 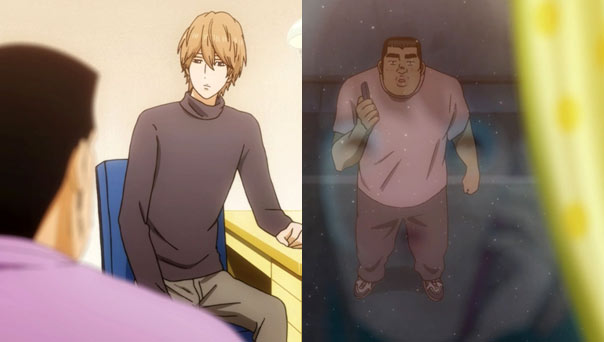 I suspected not, since the episode still had a bit of time, and I seriously doubted it would cut away to Ai or Nanako x Kurihara at a time like this. Instead, as Takeo describes his birthday with Rinko in detail to Suna, his description of the “bug” that landed on his lips as he wished is the tidbit Suna needs to set him straight. Ashamed he didn’t recognize Rinko’s kiss for what it was (and remembering her body language throughout), Takeo goes to Rinko’s place to make things right. 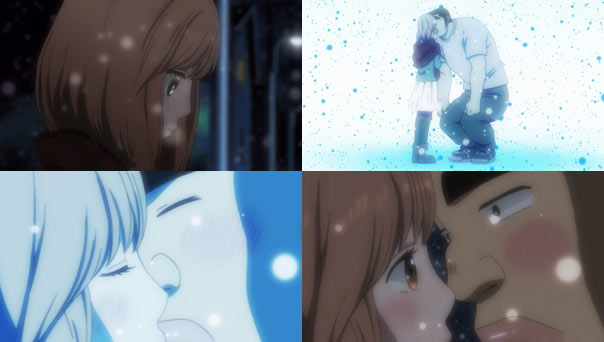 And then, without too much fuss, the two kiss, for real, for a long time, in the snowy night. We got the payoff, thank God. Yes, Takeo is comically taller and bigger than Rinko, but that doesn’t matter in this moment, just as it’s never mattered throughout the show’s run. These are two hearts beating as one. They’ve shed their embarrassment and misunderstandings in the past, and they do so here as well, thus progressing to the next level in their relationship: the post-first-kiss period.

Next up: the second kiss! A couple’s work is never done. 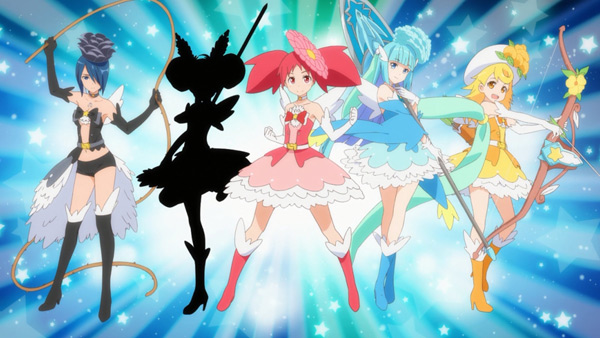 Chihaya tries to tell Toko about her and Taishi, but Toko mishears and then falls asleep. Miyoshi gets tangled in a conversation about regrets with Tanaka and ends up agreeing to go out to dinner with him later. Kanon comes to the office to meet up with Toko, and has strange interactions with Hasebe, Yamagami and Miyoshi, while Toko discovers the Section Chief is a stuffed rabbit.

An important thing to remember about slice-of-life series like this is that sometimes things that seem like they’ll be promptly addressed…aren’t. The Yamagami-Hasebe storyline is placed on the back burner this week, presumably to give Chihaya an episode in which to let Toko know she’s Taishi’s boyfriend…but that doesn’t happen either. Instead we get an awful lot of Toko and Kanon, two high school girls who are not civil servants. Or remotely interesting.

Have we mentioned we don’t really care for Toko? Well we don’t, and there was nothing in this episode that would cause us to change that stance. She’s shrill, clingy, inconsiderate, rude, and generally drags down the show with her presence. Her friend Kanon isn’t much better. This week she’s ostensibly the straight man to the antics of the office workers, but she’s as dull as Yamagami’s plain pasta. Whenever these girls become the focus of an episode, the series feels like it’s slacking off…like Hasebe. 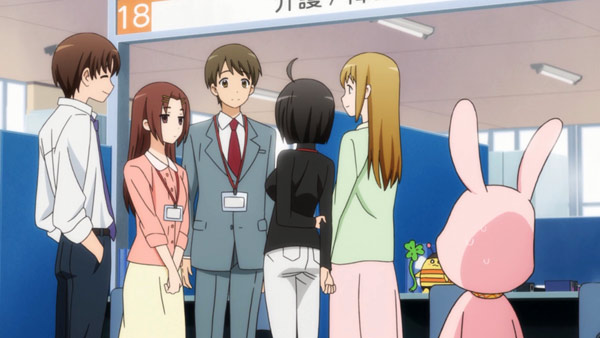 In the first half, the manager Momoi wants to interact more with the newcomers. He spends time individually with Hasebe, Yamagami and Miyoshi, who also meet his daughter Kanon. Hasebe is worried about Touko not having any friends, but Kanon is one such friend. In the second half, Miyoshi’s daily interactions with Mrs. Tanaka, Touko and Momoi wear her down into a beginner’s slump. Hasebe lets her vent, but she ends up depressing him. Tanaka asks her to marry her grandson, but after advising the others, she turns down the offer as tactfully as possible.

Among other things, this episode underlines how everyone ended up working as civil servants at the ward office for different reason. Yamagami, perhaps the simplest character due to her insufferable innocence, simply wanted to get a good job so she could afford as many books as possible (she loves to read). Hasebe’s father was in this business, and he had nothing else going on, so he ended up in it too. Miyoshi was in the middle of grad school, but her parents tricked her into coming home by lying about her father’s health. Considering how Miyoshi ended up at this job, and how stressful dealing with the people she has to deal with can be, we’re not surprised she was the first of the three newbies to consider quitting, if only for a moment.

She’s even given another reason: one of her clients wants her to quit so she can marry her responsible banker grandson, which might give her an opportunity to return to her studies. She politely refuses, but Mrs. Tanaka hasn’t given up. In addition to fleshing out Miyoshi’s situation and giving her a potential out, it also, strangely enough, shows that despite his surface sheen, he isn’t entirely happy with his situation either. Which means Yamagami is the only newbie totally happy with where she is and what she’s doing…though she’s also there to confront the one who allowed her ridiculous name pass…