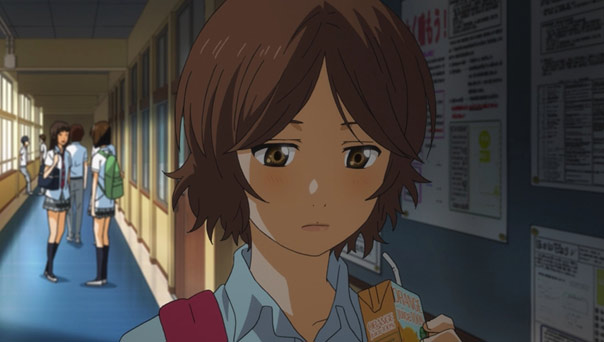 In a show with so many pleasing sounds, it’s distressing that the most noticeable sound this week was the sound of wheels spinning. With one frankly head-scratching exception, all of the key events of this episode were merely rehashing points that have already been made, with little in the way of new insights, and delivered with a distressing abundance of melancholy. 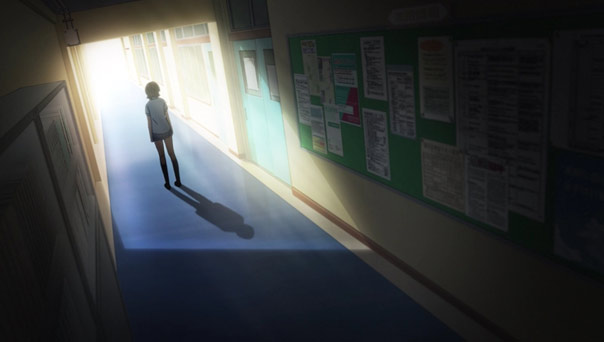 First up in this Pity Party is Tsubaki, whose problem remains the same as last week’s, but now she diagnoses herself as standing still in life as everyone else moves on. It was one thing for Kousei to be taken away by music in the form of Kaori; now there’s talk of him going abroad. The timing couldn’t be worse, as she’s just realizing these feelings when he’s about to ship off. 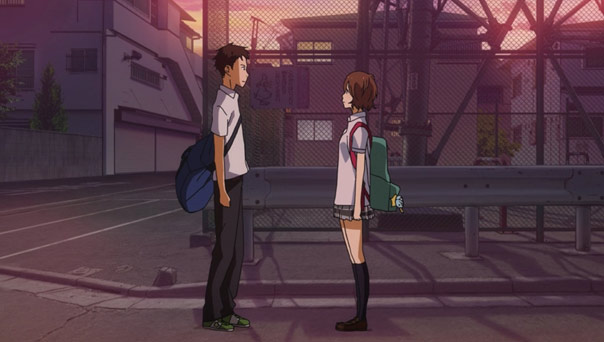 Tsubaki has also been totally phoning it in with Saito, and with his crush on her long gone, he’s the one to dump her, which he tries to laugh off as the two simply being too much alike. Obviously, it’s for the best. I was no more invested or comfortable with this pairing than Tsubaki was! 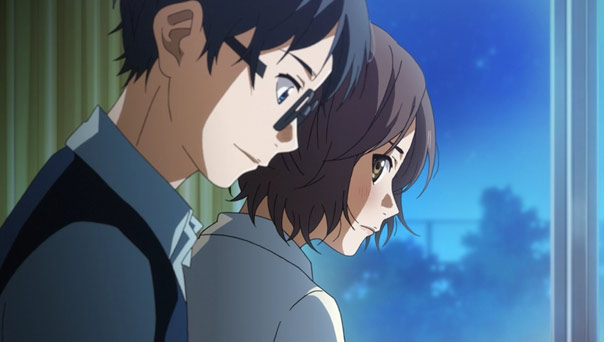 Tsubaki waits for Kousei in the practice room, and he listens to her tale of being dumped as he plays Clair de Lune. But sorry, Uso: I won’t get fooled again; this is a pretty scene, but it accomplishes nothing that hasn’t been already well-well-well-established. 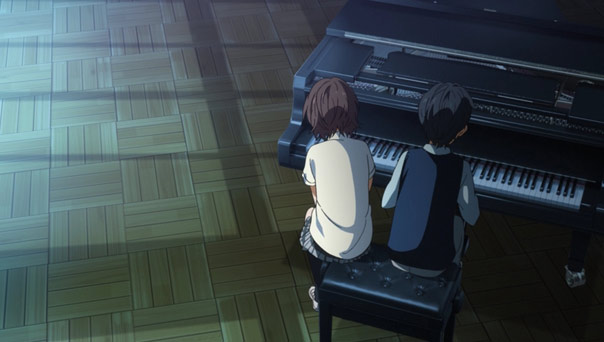 Kousei can say he’ll “stay by her side” freely, but I’m not sure why, beyond trying to half-heartedly comfort her. She knows you’re moving away, dude. You can’t say you’ll stay by someone’s side and then move away. That’s the opposite of staying by someone’s side. Saying something like that makes you a liar, which is, incidentally, the title of this episode. 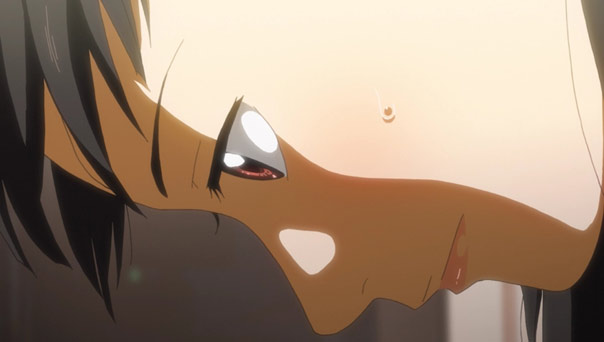 The episode doesn’t spend all its time reiterating and embellishing the slo-mo train wreck that is Tsubaki and Kousei’s relationship, but dances from place to place. Kousei keeps hesitating to visit Kaori in the hospital. Emi is killing it in competition, with Kousei as her muse, while Takeshi is only wounding it. 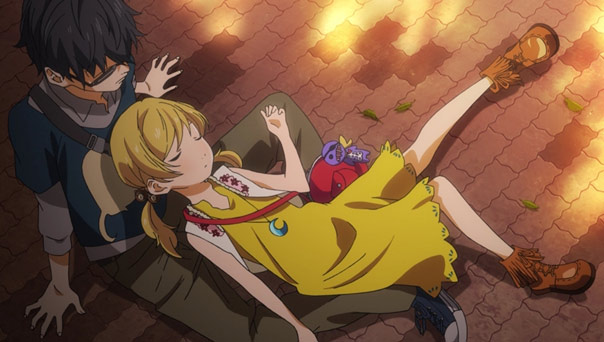 The most inexplicable development is the pint-sized Aizoto Nagi falling out of a tree into Kousei’s lap. He takes her to Hiroko’s, where she wakes up and reveals she’s a top piano student at a prodigious school, and begs Hiroko to be her teacher. After hearing Nagi play the same Etude Kousei played in the competition (harshly, but very well for her age), Hiroko agrees to bring her on. 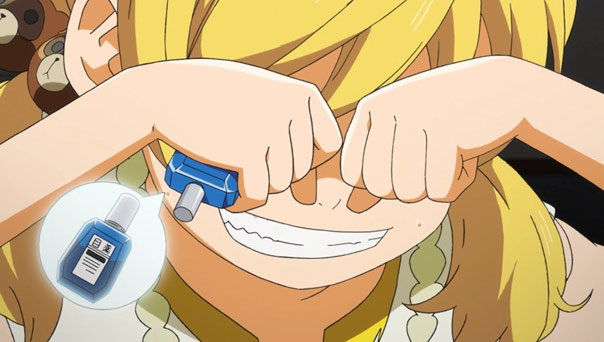 Nagi tearfully rejoices, but those tears were faked by eyedrops; this is all clearly some kind of scheme. But the joke may be on her, as Hiroko delegates her training to Kousei. You know what they say: “Those who can’t [hear the notes], teach.”

I’m not quite sure what to make of Nagi’s introduction (hence the head-scratching), except that it’s kinda late in the game to be introducing a moe misfit. The check-ins with Emi and Takeshi reminded me the show doesn’t have enough time to do all the characters it already has justice. 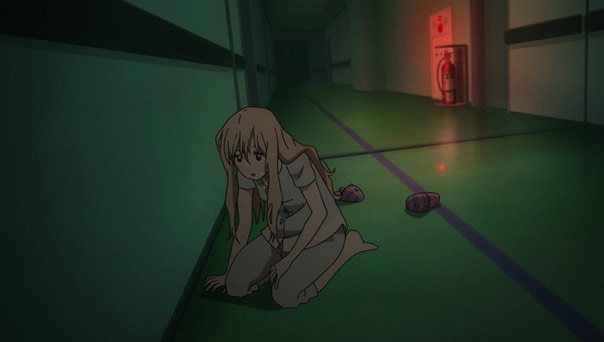 Then, the cherry on top of this Cake of Despair is Kaori, who was pushed to the sidelines for the whole episode due to her being in hospital and Kousei refused to see her. He comes close once, but hears Ryouta laughing with her in her room and scurries away. 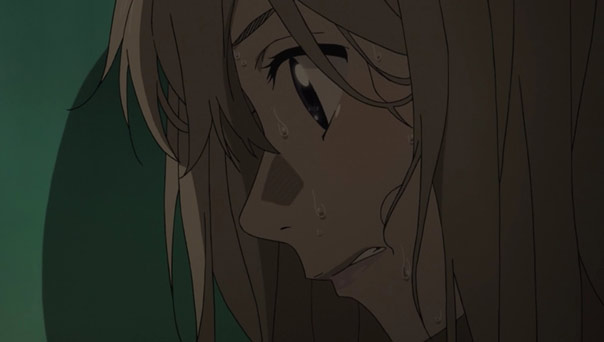 It’s not enough that we know Kaori has some undisclosed illness that requires ridiculous of meds and intermittent, interminable hospital stays. We also have to watch in horror as her legs suddenly give out beneath her, in the dark corridor of a hospital where apparently no one is on duty. Pretty dang morbid.

I’m sure someone will find her, and she’ll be put back in bed, and Kousei will visit her and she’ll simply laugh and smack him in a stylized comic burst and basically tell him everything but the truth.

Everyone is suffering in Uso right now (except Saito, but who cares about him?), and I’m starting to suffer right alongside them. Would it kill somebody to tell another what they’re really thinking? For gosh sakes, the destroyer girls did it in their third episode!

Tsubaki is in a pinch. At the start of the episode, she’s still in denial about her romantic feelings for Kousei. Case in point: way she watches him race off the moment she tells him Kaori’s in hospital is not the way a ‘big sister’ looks at her ‘little brother’.

Kousei is also in a pinch. Before Tsubaki told him, he had no idea what had become of her; he doesn’t even have her phone number. He knows a little about her, but there are vast gaps, gaps she won’t fill, preferring to hide behind smiles when anyone can clearly see she’s not well at all. She even goes so far as to stop her I.V. while they’re gone. I do not buy her claim of “simple tests”, no siree.

Neither should Kousei…yet despite the overwhelming evidence before him that history may be about to repeat itself in the form of another loved one leaving him, he chooses to believe Kaori will be back at school and with him in the music room soon. 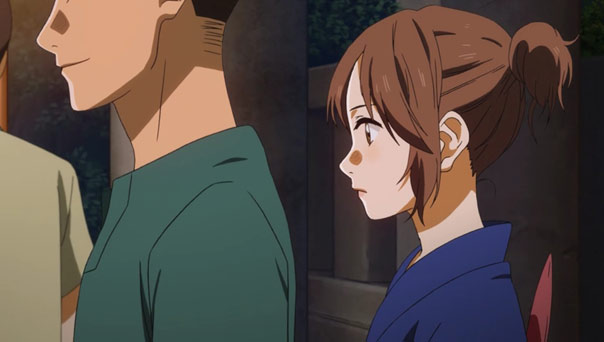 Kaori’s brave front is probably so she won’t hurt Kousei and the others, but her sudden death will certainly hurt them even more. In matters of love, Tsubaki is also too scared of losing what she has with Kousei if she tries to go for more. She tries to dull the pain of this ‘limbo’ is causing with Saito, but her past crush was just a crush; she can’t feel anything for him. Yet she keeps strings him along. 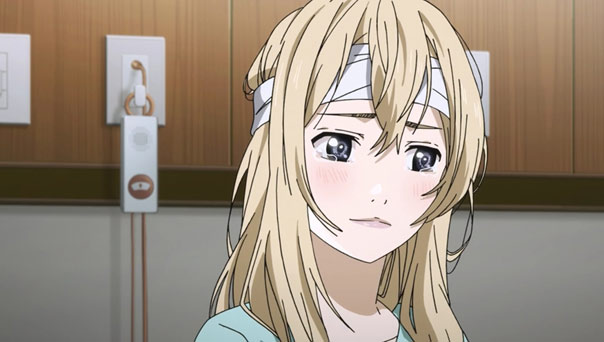 Kaori, Kousei and Tsubaki are all trying to fight back potential or certain, that lies just beyond the horizon, and all are paying a price, both for themselves, and the ones they love. Kaori sees in Kousei’s face the pain her omissions and can’t hold back tears. Kousei clings so tightly to a positive prognosis for Kaori, he’s ignoring Tsubaki at a crucial time in her romantic life, causing her to hurt Saito in turn.

Kousei and Kaori’s situation is quickly eclipsed this week by a Tsubaki emphasis, the first in a while, and notable in the fact she’s not a musician at all. In fact, the sad dark truth is that she’s always hated music, because it seems to be the one thing always keeping her and Kousei apart. Things are even more complicated now that music has a face, a voice. How can she step over a girl in the hospital to get to Kousei? I understand, but you don’t decide who you love. This isn’t some passing fancy.

Kashiwagi, whom I swear wasn’t in the first cour more than a few minutes total (if at all…unless she has Stealth Mode like Kato!), and Ryouta are the only two neither hurting nor being hurt. Ryouta seems to have all but ceded Kaori to Kousei seeing their greater connection.

When Kashiwagi tells him about Tsubaki and Kousei and Saito, Ryouta isn’t interested in breaking it to Tsubaki, knowing how bristly she can be. It falls to Kashiwagi, who makes her realize she’s hurting Saito by continuing what is clearly a charade. 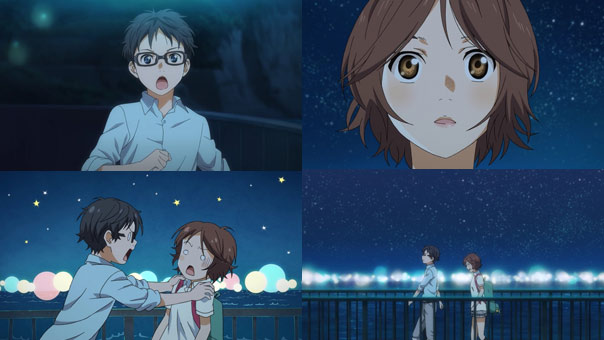 In a nice bit of timing, just when Tsubaki gets off the phone with Kashiwagi, Kousei comes racing to her side on queue, having been told by Ryouta that she was in some kind of trouble. It’s the opposite of what happened at the beginning of the episode, and for the moment, it makes Tsubaki’s day. We watch her following behind, talking and laughing with Kousei, as naturally as she looked forced and out of place beside Saito. 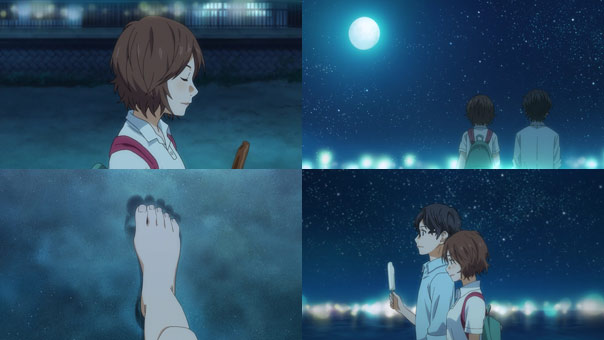 Here, she doesn’t have to check herself from telling stories about Kousei, because he’s right there, ready to come back with stories about her. Everything that’s happened in the last few months, including Kousei getting back to the piano, made Tsubaki’s feelings shift from those of a doting big sister, to those of a woman in love with a man who got taller than her and whose feet got bigger without her even noticing. 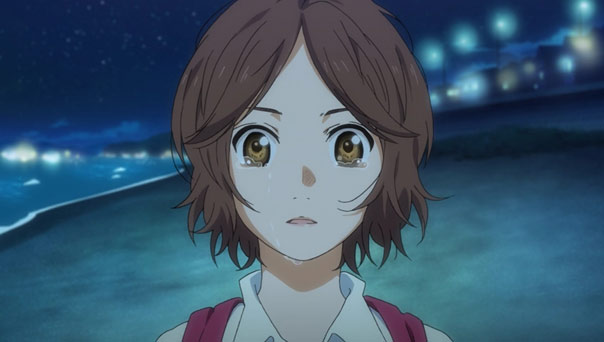 But as Kashiwagi warned Ryouta, leaving her to realize it for herself, here and now, turns out to be too late…though not by much! Ironically, it’s when Tsubaki echoes Kaori’s words about Kousei being a rare and special artist capable of transcribing his very memories to notes, that Kousei lets her know he’s planning to go to a high school with a musical course, out of town, thus separating them for the first time…ever. 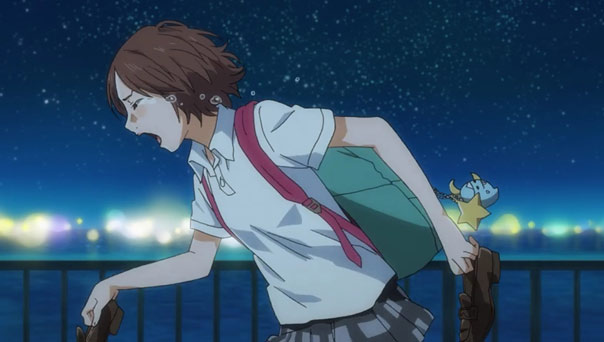 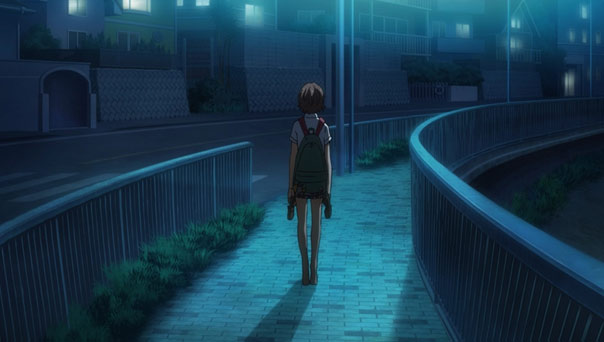 Tsubaki can’t hold back tears any more than Kaori could, and runs off into the night, still barefoot from the beach where just a couple minutes ago she was on cloud nine, humming “Claire de Lune” along with him (having heard it so much next door). Now alone, her feelings for Tsubaki sink in fully, along with the bitter realization that music has once again taken her Kousei away from her….perhaps this time for good.

The question is, will she let it? And will Kousei let Kaori go quietly into the night?