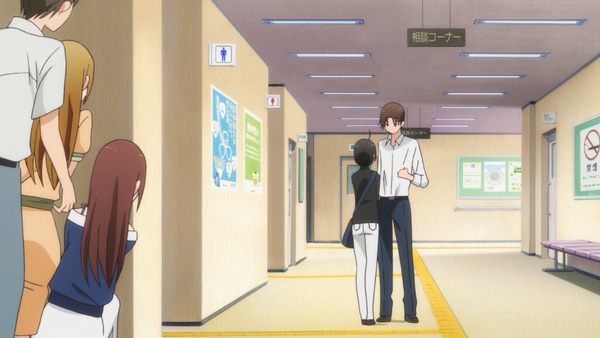 Hasebe learns that because he had a high fever, his father was preoccupied with him and thus registered Lucy’s ridiculous name. Burdened with this secret and worried Lucy will hate him for his indirect role in her naming, Hasebe and Lucy are awkward all day. Chihaya rubs his nose in it while Ichimiya and Saya try to cheer him up; by the end of the day all of them agree he should tell her the truth as soon as possible. He finally confronts her and tells her, and she doesn’t blame him, and wants him to keep calling her Lucy. She again rejects his call to go out with him, but qualifies it by saying simply “not yet,” and finally gives him her email address.

For thirteen weeks we’ve looked in on the lives of three new civil servants experiencing life in the workplace for the first time, their slightly more experienced supervisor, his not-so-secret girlfriend/co-worker, his irritating but devoted little sister, and the stuffed section chief. When we look back on how we entered their lives and now how we’ve left, it definitely makes the term “slice-of-life”, as this was literally just a thirteen-week slice. But ultimately the focus of these weeks was on the unlikely but burgeoning relationship between the girl with the really long weird hippie name and the guy who falls for her despite himself, and finds out he’s ultimately responsible for that name. Their scenes together have been the highlight of a series that was always consistently pretty good, though never outstanding.

One thing we didn’t like about this series was how much time it devoted to Toko. But when she wasn’t in the picture, we were watching adults taking care of business, but also earnestly (sometimes harshly) reaching out to one another – or at least trying their best to do so. Right up to the end, Lucy proves she’s an adult by shrugging off the truth Hasebe finally reveals to her after much stressing (their awkward exchanges prior to the confession are very well done.) She doesn’t even consider blaming Hasebe for having a fever…because she’s reasonable. We’re also content with her “not yet” answer to Hasebe’s repeated propositioning. It’s just like her to be careful and tentative in an arena in which she’s still very green, but it’s also clear she likes Hasebe, wants to spend time with him, and, after all her bluster about hating her name, likes it when he calls her by it.