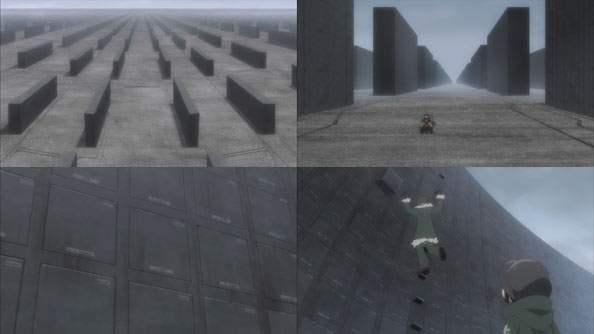 Girls’ Last Tour starts with a somber tone, as Chito and Yuuri roll into what looks like a network of enormous filing cabinets that I immediately identified as graves. If they don’t contain remains, they do contain remnants of the lives of those whose names adorn them: a radio; a bit of cloth; a shell casing; a button.

Yuu brings these along thinking they might be able to use them for something, but Chi reprobates her: if these objects are removed, they lose the meaning they already carry: to remind people—in this case, Chi and Yuu—that they existed.

The only other witness to the memories contained within those endless graves is one of the tall, sidelong glancing stone idols Yuu likes so much (and believes somewhat resemble Chi). She takes photos of both the idol and Chi, in order to preserve both for posterity. Indeed, Yuu wouldn’t have remembered Kanazawa if he hadn’t given him the camera.

In the next segment, it’s finally time to ascend to a higher level. Thankfully, no rickety elevator is needed; there’s a spiral ramp they can ride the Kettenkrad up. The only problem is, the spiraling gets so repetitive, Chi gets dizzy, and Yuu has to snap her out of her trance before she drives the ‘krad right off the ledge.

They can bypass the sudden gap in the ramp by driving out to a metal ramp, but it’s a lot more rickety than the concrete surface inside, and the weight of the vehicle causes it to fail. Yuu has Chi hit the accelerator, and after a particularly harrowing few yards, they’re back inside, and the ramp they were just on plummets to the ground.

There’s no doubt it was a risky move, but the reward is that they are now on a higher level, just as night falls and a full moon rises. Yuuri, perhaps somewhat bewitched by said moon, picks up the nearest metal stick and starts trashing what looks like an abandoned office. That is, until in her excitement she whacks Chi on the head with that stick, and Chi tackles and disarms her.

Then the girls find several sealed bottles containing some kind of liquid. Chu reads the label as “Beeu”…or beer. 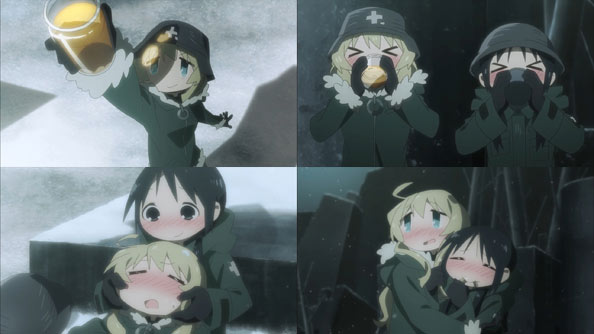 Yuu pops open a bottle, pours the “golden water” into a clear glass, and holds it up to the moon, thinking the moonlight is melting into it. She and Chi both take generous gulps of the stuff, and find that it agrees with them.

Before long, the stoic, dour, practical Chito dissolves into a fun-loving lush much more similar to her companion Yuu. She affectionately embraces Yuu, stretches her face, dances with her in the moonlight, and eats her hair.

The next morning, after celebrating in style (and violating laws that no longer exist since there’s no one around to enforce them), they begin exploring the new level. Chito has a nasty hangover, but Yuu unsurprisingly seems to be no worse for wear.