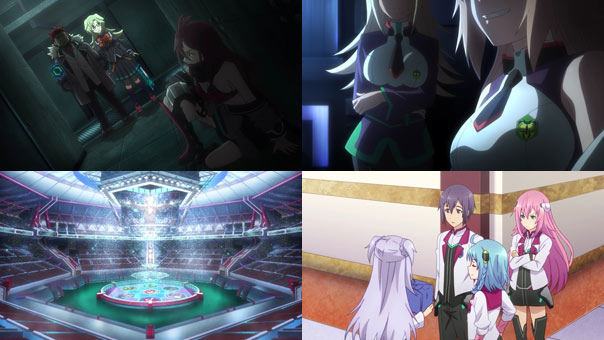 Okay, no more messing around: the long-awaited Phoenix Festa is finally upon us; that is, after the introduction of Irene Urzaiz, a student so badass she’s in school prison. The head of the “Steering Committee” also announces the controversial decision to allow contestants to field alternates (AKA puppets), bringing a grin to Ernesta’s face.

Before Ayato and Julis’ first match, a light lunch is indicated, which is provided in the form of various over-sized rice balls made by Kirin with Saya’s help. Saya is able to glom onto Ayato briefly, and even get her head patted by Ayato like Kirin. Julis, however, does not request to have her head patted, and lets the silver and blue have their fun. 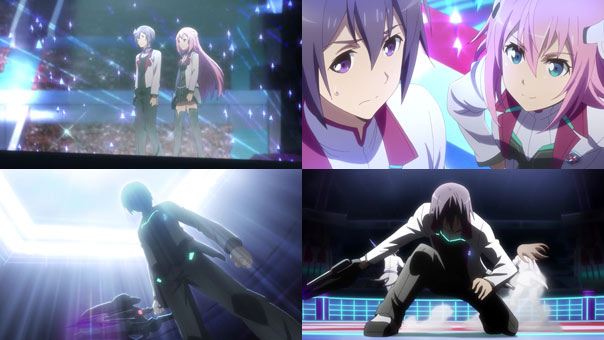 When lunch is over, it’s Showtime, and Julis has Ayato all to herself. I liked how confidently Julis, used to distant adoration, strutted out to the arena, while Ayato was a lot more nervous, and how she actually flaunted that confidence by acknowledging the cheering masses. She is a famous princess, after all.

Going in, Ayato is hyped as the only Rank #1 fighter in the Festa, and he decides to waste no time demonstrating that, breaking out Ser Veresta and putting on a little show of powering up before dispatching the two opponents (who weren’t even introduced) all by himself, with one swipe.

But it’s not just a convincing win; everything went according to plan. Ayato’s chains were presented as showmanship rather than a hindrance to his abilities, and his battle time limit was kept secret by keeping the battle short, with the assumption that Julis would step in once he can no longer fight.

Julis also makes sure Ayato knows to be evasive to the press lest they give anything away. This isn’t Julis’ first rodeo; she knows ignorance is their best weapon, while any info their opponents glean is ammunition against them.

That brings us to the next battle, one between two Le Wolfe brothers who each look at least 35 years of age (Why?) and the two combat puppets built by Allekant’s Ernesta and Camilla, a male-female pair named “Aldy” and “Rimsy”, whose dynamic and banter resembles that of their human creators.

Le Wolfe dudes flash their skills with wind magic and marksmanship, but even with one minute period in which the puppets don’t attack, they can’t put a dent in ’em. The minute is up, and it’s Game Over for the over-aged brothers, as expected.

Those puppets will definitely potentially pose a challenge to our Seidokan pals; I’m thinking Kirin and Saya will face them at some point, while Irene Urzaiz is gunning for Ayato, with orders not to necessarily win her match, but simply to destroy him.

In any case, we’ll see if the show takes us to those faced, named challengers or if Ayato & Co. will have to carve their way through more nobodies before they reach the “bosses.”