To their enemies and detractors, Slaine and Inaho are insignificant, pathetic, impudent nobodies. Even so, Slaine is able to contact the Emperor of Vers, while Inaho must face off against Vlad a second time, and a second time shows him the door, only this time it’s a permanent arrangement. 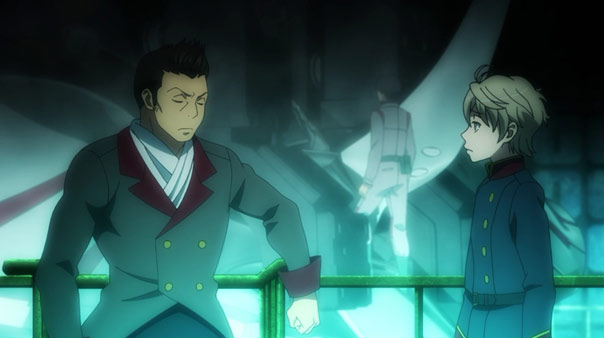 Unfortunately, Slaine’s efforts have the opposite effect that he intended, because Count Saazbaum got to His Majesty first. The emperor may know Slaine since he was a child rescued by his granddaughter after crash landing on Mars, but right now all he cares about is exacting justice for an assassination that didn’t really happen, and certainly wasn’t the UE’s fault. 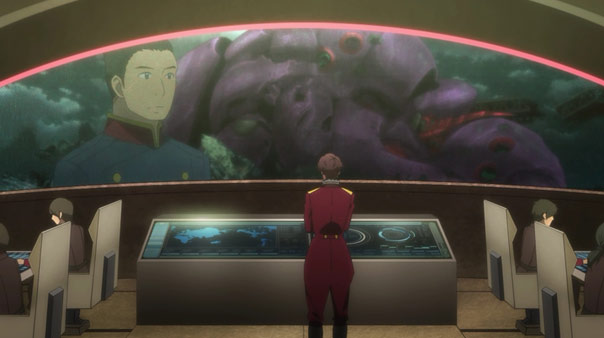 The emperor had initially issued an armistice this week, but you wouldn’t have known it from Vlad’s actions. Apparently repairing his personal honor through a rematch with the “Orange Brat” trumps an imperial decree. But when the cat’s away the mice will play, and the cat is between 54.6 and 401 million km away.

Vlad lands on the deck of the aircraft carrier where Inaho & Co are aboard and starts wrecking up the place, but while the professional soldiers in their top-of-the-line kataphrakts are carved up like a cake, Inaho is ready for him with more unconventional tactics, making full use of explosive armor, putting Vlad’s kat into a hold.

Vlad’s so confident he’s going to make mincemeat out of Inaho’s orange trainer, he neglects his surroundings. Inaho has the helm tilt the ship as he has Vlad caught in a hold, then bails out as the two kats fall overboard. The heat from Vlad’s own swords causes a steam explosion that destroys him. 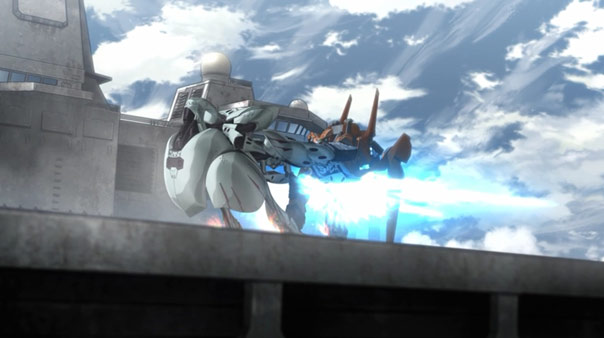 All in all, pretty awesome battle, though he makes the other soldiers look bad, they’re products of their conventional military training, which won’t work against Vers. It’s also a nice touch that the one to pick him up from his escape pod is Rayet, holding out a hand, seeming to say wordlessly “I like living, so thanks for saving us. Again.”

Rayet also seems to do Asseylum a favor by discouraging her from revealing herself to the ship’s captain and asking them to contact her gramps. Gramps is convinced she’s dead, and unless she can sneak into an orbital knight’s castle and contact him directly, he’ll stay convinced.

Since Saazbaum is now aware of Slaine’s treachery, further communication with the emporer by anyone with the actual truth in their possession will be no mean feat. The armistice is off again, as are the gloves.