Well now, the final battle between Amagiri/Julis and AR-D didn’t last as long as I thought: in fact, it gets wrapped up in the first ten minutes! Of course, I never believed for a second Amagiri and Julis were going to lose to an autonomous Gundam knockoff, and the resulting foregone-conclusion feeling diluted the joy of victory, but no matter: it was a suitably intense final, with Julis helping Amagiri transform Ser=Versta into the form best suited for him.

Once he has his new, smaller, lighter, faster sword, it’s Game Over for AR-D, who is gracious in defeat. Amagiri and Julis get their trophy, heaps of applause, and the adoration of all…except for those lurking in the shadows.

While Amagiri and Julis soak in the victory, thank their friends, celebrate, flirt a little, and wonder what’s next, Dirk the Tyrant is busy trying to recruit Ernesta (and possibly succeeds by withholding vital raw materials for her research). Yabuki tries to take out the former Grimalkin agent Werner in a sewer, but fails. 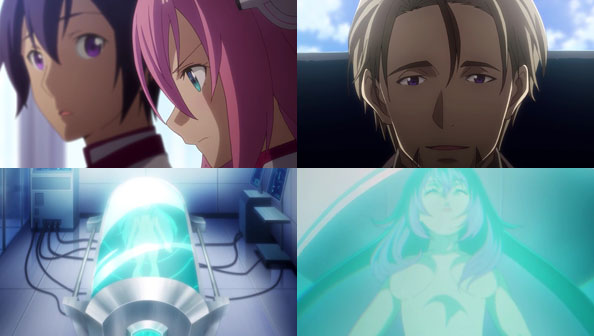 Finally, a police investigation finds no evidence Dirk or Le Wolfe were involved in Flora’s kidnapping, frustrating Julis, who wants justice. But it’s clear while our hero and his ladies fight the good fight the right way, they are surrounded by cockroaches scheming and corrupting behind their backs.

Chief among those scumbags is Asterisk Steering Committee Chairman Mesa, who tells Julis lies about the investigation (in truth, he’s allied with Dirk, if not working for him) and more despicably, tells Amagiri lies about starting a search for his sister Haruka.

All this poor kid has wanted since the start is to see his sister alive and well, and he’s exceeded everyone’s expectations (except perhaps his own and Julis’) in getting to a place where he can actually make the request, and yet he still has to deal with all this backroom political bullshit and a perv keeping Haruka stashed away naked in a stasis tube.

If you ask me, they all need a taste of Amagiri’s newly-optimized blade. I wonder how he and Julis will play this in the next three episodes, and if a reunion with Haruka will be deferred for a third season (which would be kinda lame).

A brief glimpse is all we need to learn why Kennosuke called Yukina ‘princess.’ Yet for his stalwart protection of the lookalike from robotic monsters, he is thrown in a cell, where he dreams of a time that has long since passed.

Meanwhile, Yukina, who pushed the red button that released him from his long slumber, is told to “stay put” by her mother, at least until they has a better picture of what’s going on.

Yukina does not stay put.

Her mom leaves her phone behind—again—allowing her to escape about the same time Ouma does. It seems that fate was meant to bring these two together.

Kennosuke has been moving so fast, it isn’t until he and Yukina have a moment to breathe that he realizes…she isn’t the princess. He voices he’s upset in a most amusingly old-fashioned manner, but when his cockpit-cube arrives and transforms into a ‘steed’ at his command, he still puts Yukina in the copilot seat. She’s not the real deal, but could she be a descendant? A reincarnation?

Yukina blasts past Mika and other shelterers as the steed takes her and Kennosuke to his “Black Relic”, the centuries-old equivalent (and likely template) for the UN’s GAUS suits (which don’t appear this week).

Once outside in the world, Kennosuke is, not unreasonably, very confused and disoriented. The mountains are familiar, but what’s with the lake? “A wonder of human ingenuity,” says Yukina. “Deceptive drivel!” says Kennosuke.

Similarly, the buildings of the city they approach appear to him like giant tombstones, which they will actually become if the yellow scourge, which Ken calls an Oni or “Demon”, is allowed to stomp around unchallenged.

I dig Ken’s archaic way of speaking, as well as his almost complete unpreparedness for being in the modern world (despite, you know, piloting the giant mecha) Yukina, for her part, remembers her father’s tales of demons coming to devour everyone, suspects that’s now what’s going on, and perceptively declares this situation “the pits!”

Fortunately, Ken was right to put Yukina in the copilot’s seat, because not only does she understand the relic’s interface, she serves as an invaluable second set of senses in their battle with said demon. The JSDF and ASDF’s conventional military forces are completely worthless against the beast, so it’s Ken and Yukina or nothing.

The battle itself is heartening, not just because it brings a ferocious energy that was somewhat lacking last week, but again shows Ken still a lot to learn about modern urban combat. He’s understandably rusty, but thanks to Yukina, he stays alive and his relic is undamaged, while they score a hit on the yellow demon and force it to retreat, ascending up to an infernal mothership lurking in orbit.

In hindsight, these first two episodes work far better as a double episode than separately, with the true climax not arriving until the city battle this week, which puts Yukina and Ken on more equal footing as co-pilots. This may seem like ‘the pits’ to Yukina now, but it’s also a definite path forward.

Where before she was simply drifting about, unsure of how to become the successor to her mom she assumed everyone around her expected her to be, now she has the means to become something else entirely; something just as important, if not more so. 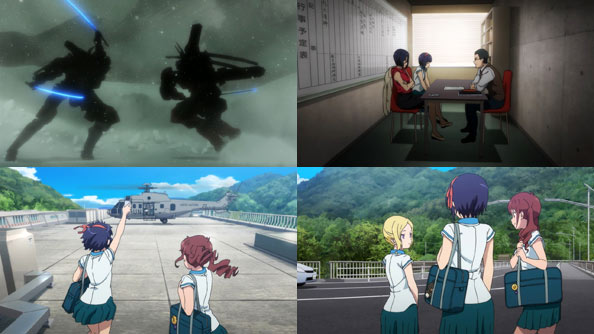 Kuromukuro opens with a striking image: that of two beastly mechas with glowing katana dueling in a snowstorm, as samurai battle and lay bleeding on the ground.

Cut to a parent-teacher conference in which Shirahane Yukina’s advisor is informing her highfalutin’ mom Hiromi as tactfully as possible (though not very) that her daughter may not have the smarts or the talent to make much of herself, as indicated by listing “Mars” among her future goals.

Hiromi storms off, leaving her UN-issued phone behind, and both her mom and her friend Sophie (who also works at the UN lab in Kurobe) aren’t listening when she tries to return it.

Yukina (voiced ably by Ichimichi Mao, who is also Space Patrol Luluco this Spring) has lofty goals but her motivation is compromised by being the daughter—the princess, in a way—stuck in the shadow of the queen, her mom, the director of the Kurobe Lab.

The episode does a good job establishing Yukina as someone a bit hemmed in and intimidated by her circumstances, who may just need a swift kick in the bum to on track to greatness. But this week she’s very much a passive observer, with one key exception (more on that later).

Sure enough, a potential bum-kick arrives in the form of a rude invasion by a swarm of evil mecha led by one giant one, who crash landed just outside the UN lab. The security forces do there best, but are soon overwhelmed, and Hiromi (ensconced in a very Evangelionesque CIC) deploys their own experimental mecha. 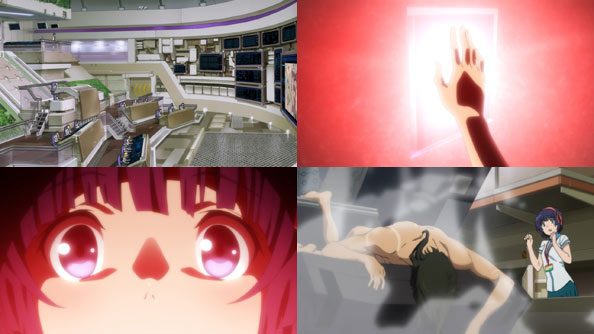 It’s at this point that Yukina, who happens to be in a lab where a large, mysterious, black, cubic artifact that was found during the construction of the dam, stops watching and does something.

Specifically, she hits the Big Red Button on the side of the cube, and out pops a naked man, awakening from suspended animation of untold duration. 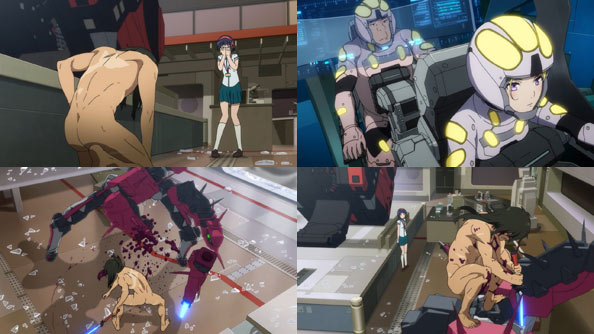 Having pushed the button, Yukina returns to Standing Around Mode, while her classmate Sophie pilots one of the UN mecha and takes out the giant enemy mech.

A smaller mech gets in the lab where Yukina is, and the naked guy whips out a katana and protects Yukina, whom he calls “princess” (which may or may not be a coincidence). He looks, talks, and fights like a samurai, and even has a samurai name: Ouma Kennosuke Tokisada. 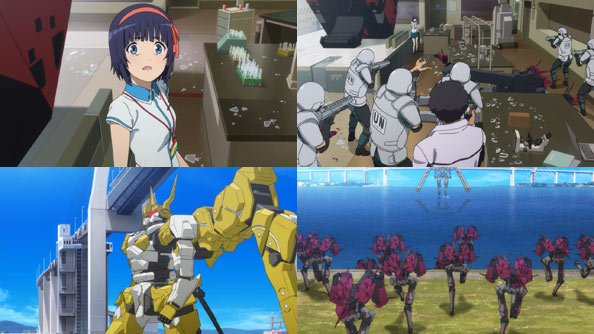 Once the small mecha is taken care of, UN police swarm in to deal with the naked man. Thus ends Yukina’s big, interesting day of watching stuff happen around her, to which she contributes a single button push that may just be the most important action taken.

Or it would end, but for another giant mecha headed to the UN Lab, along with another swarm of grunts. There’s a similar giant machine in deep storage at the lab, and judging from the configuration of the UN prototypes, it needs two to pilot. So I suspect Yukina and Ouma will be the ones to do so next week.

So far this is a heckuva lot better and more promising than the last P.A. Work Zane attempted, Haruchika, particularly in terms of production values. I’ll give it an 8 for design and a female heroine, and a 7 for overall story, action, pace, and originality.