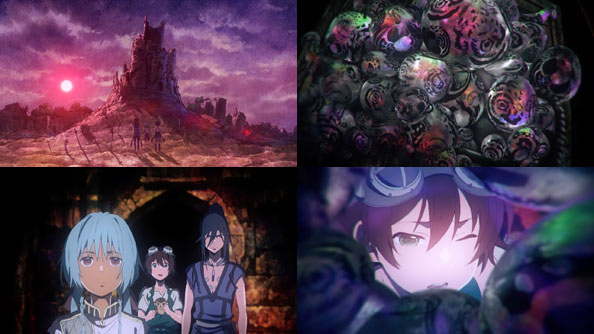 What I thought was the start of some kind of grand adventure involving Chakuro, Ouni, and Lykos turned out to be more of a quick stop. Lykos (which isn’t her real name) shows them the creatures called “Nous” that suck all emotion out of humans, leaving them “heartless.” Chakuro and Ouni only get a brief taste of the experience, but I imagine neither of them wanted to get a longer one, as intriguing an experience as it might’ve been.

They’re brought back to Falaina, where Ouni is thrown in jail, Lykos returns to the custody of the elders, and Chakuro is freed after “cooling his head”—just in time for the extraordinary periodic phenomenon involving swarms of glowing star locusts. Chakuro breaks Lykos out of confinement so she can see the event with him, and jealous vibes immediately emanate from Sami. 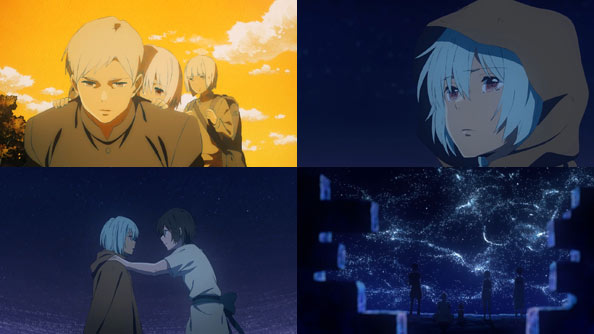 Having been away from…whatever it was she was doing on that other island, Lykos is definitely starting to show more emotion, and when she remembers the time her father gave her a piggyback ride (out of practicality, not love or any other emotion) she can’t help but cry. Chakuro thinks it’s normal, and it proves she has a heart. And anyone’s heart would be stirred by the light show they get.

But that night, Lykos almost told Chakuro something very important, and the next day, really really wants to tell that something to the council of Elders. She best she gets is Suou…but by then, any warning she might’ve given is too late: another island sidles up to Falaina and an attack is launched by its highly-prepared and more technologically advanced occupants.

Those we see are wearing clown makeup (not a great first impression), and Chakuro and Sami stare up at their airship in Miyazakian awe…right until they open fire, Sami jumps in front of Chakuro, and gets riddled with bullets. I was not expecting that! Poor Sami!

It’s a bold, dark new turn for what had been an pleasant Utopian slice-of-life. That’s not quite right: the introduction of Lykos and her lethal magic last week marked the beginning of the end of the “good times”, while the locust swarm was the punctuation mark for the Mud Whale as a place of peace and contentment, and even that peace may have been artificially maintained, as the elders likely knew something like this was possible and/or coming, and have kept all of the Marked in the dark.

It would seem our protagonist and his society are viewed as “sinners” in the outside world, perhaps because they still possess the emotions the Nous feed on and make no effort to purge them. Thus ends Chakuro’s official archive of the Mud Whale, and the beginning of his personal diary.