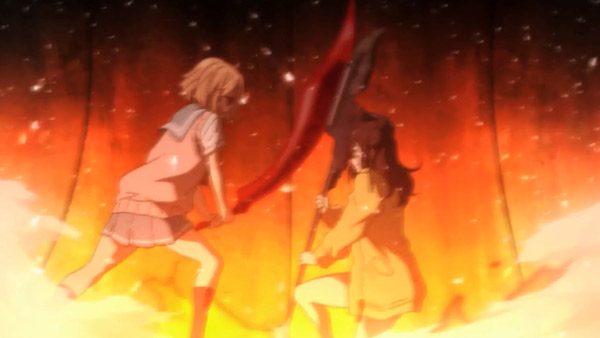 Inami Sakura remains in town, and transfers to Mirai’s class. Of evenings she defeats low-level youmu, charging her scythe in preparation to fight Mirai, but grows exhausted from its power and is rescued by Akihito, who takes her to his apartment. Mirai shows up and catches a glimpse of Sakura before she flees. Later the two duel in a sewer pipe. Sakura is no match for Mirai, and is nearly devoured by her own weapon, but Mirai saves her and talks her down. Fujima Miroku, the one who originally gave Sakura the scythe, retrieves its from the sewers. Izumi and Mitsuki observe the start of “the calm.”

You can be the most badass spirit hunter around, but what’s that compared to being a great cook? We kid; we truly enjoyed this episode—enough to award it a 9—but it was very different from last week’s 9. Whether it’s a playful loopy standalone romp or a serious character drama culminating in an earned catharsis, Kyoukai no Kanata it is capable of making any story a compelling one. This week was the dramatic kind, in which welcome resolution comes to the impasse between Mirai and her would-be nemesis Sakura, sister of the friend Mirai “murdered,” climaxing in a cool close-quarters sewer pipe fight. And the episode doesn’t forget how Mirai’s outlook evolved after defeating the hollow shadow.

Not letting guilt and regret consume and define her anymore, Mirai recognizes a similar misapplication of energies in Sakura’s. She knows from experience that Sakura is walking down a one-way road with no solace at its end. As much or more than she thirsts for vengeance, Sakura hates being so unsuited for the work at which Yui—and Mirai—so excelled, and of being unable to carry her sister’s mantle, something she never should have felt she had to do (but was encouraged by Fujima, lending her that scythe). Mirai is able to pull Sakura from falling into the shadowy abyss, for which she’s thankful, and onto a new path of peace, forgiveness, and self-acceptance. We like the change, and it will be interesting to see what the show does with Sakura going forward. 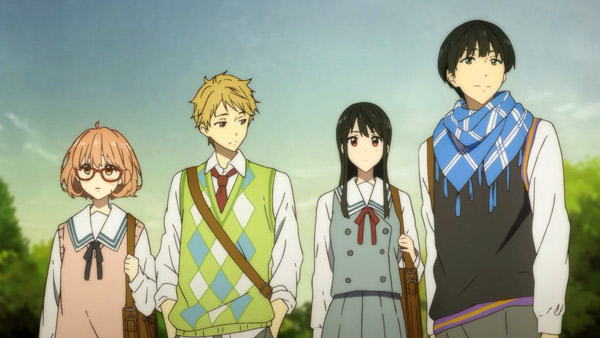 Mirai joins the literary club at Akihito’s insistence  officially meeting Hiromi and Mizuki. The four go to the Nase residence, where Izumi confiscates Mirai’s hunting license for a month due to her actions. Mizuki and Mirai work together to destroy a youmu possessing a passerby. Mizuki helps Mirai get a part-time job minding Ayaka’s store and posing for photos. Depressed after his transformation, Akihito skips class. After much convincing, Mirai gets Mizuki to end her embargo and attend the lantern festival, where they’re joined by Akihito and Hiromi.

There’s really nothing quite like a well-funded Kyoto Animation series, and little this season can match its frame-for-frame grace and beauty. Lovely details abound: characters rapidly cycling through facial expressions, lessening the need for spoken words; characters playing with their hair; swirling ice in a glass; arrogantly sipping on a juice box. If this is a guilty pleasure, we don’t want to be innocent. In contrast to last week’s focus on one big central story-line – defeating the hollow shadow – this week is a veritable smorgasbord of little vignettes that make up the day and night Mirai spends mostly with Mizuki, leading to something resembling the start of a friendship.

When Mizuki first shares a space with Mirai this week, you can tell there’s tension. We’re assuming if Mizuki had her way she’d simply be able to “observe” Akihito in peace, free of interloping bespectacled strumpets. But the more time she spends with Mirai, her notion of her softens, to the point she’s even laughing and smiling around her. Perhaps a part of her admires Mirai’s willingness to reassess her ascetic outlook in light of recent events. Mizuki’s stoic sister admonishes her that she’ll always be alone due to her calling. But in truth, everyone is “all alone” at one point or another, so its something everyone can relate to. 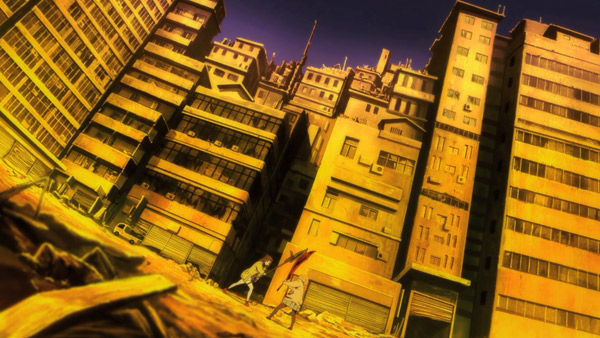 When the “Hollow Shadow” – a massive, storm-like, amorphous dreamshade (youmu) approaches the town, Mirai is resolved to fight it, while continuing shun Akihito. Through Mitsuki and later Mirai herself, Akihito learns that she was adopted by the Inami family of spirit hunters, but when the Hollow Shadow possessed their oldest daughter Yui, Mirai’s only friend, Mirai panicked and killed her. Yui’s younger sister Sakura ambushes Mirai; and they’re both absorbed in the Hollow Shadow. Sakura is about to kill Mirai when Akihito appears and breaks up the fight.

When Akihito delivers to Mirai a 10,000-yen bounty for the youmu she cornered (Mitsuki finished it off with her pet squirrely thing), Mirai verbally refuses the cash, but contradictorily holds her hands out to take it. Akihito notes that her words don’t match her actions at all. This is one reason why he ultimately ignores her warnings to stay away from her and out of her affairs, to the point where she’ll even stop hunting him. The other reason is, without knowing it, she’s put a spell on him. Not literally, no, but he cares about her and doesn’t want her to throw away her life.

When the ominous Hollow Shadow arrives in town, it’s treated as a force of nature like a hurricane; something to weather out, not take on directly. Mirai disagrees; she killed her only friend attempting to fight it, and in addition to not wanting that death to be in vain, she wants to atone, at the cost of her own life if necessary. It’s good then that Akihito decided not to listen to her words. Considering how quickly Sakura almost defeats her, Mirai probably would not have lasted long against the Big Black Cloud of Malice. Not that we expect her to be grateful for his heroics. 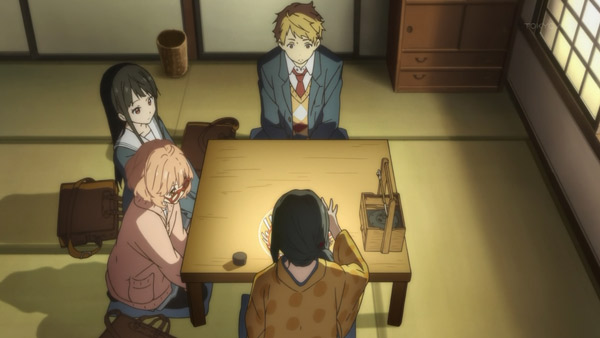 When the dreamshade escapes, Mirai chases it all over the neighborhood as Akihito follows. She finally defeats it after great exertion, and it turns into a jewel-encrusted rock. Akihito invites her to join the literature club, but she declines. The next day he takes her to an appraiser for the rock, but she isn’t home, so he introduces her to Shindou Ai, a dreamshade with human form. Akihito asks around for information on the shade Mirai fought, including his senpai Nase Hiromi, but no one has answers for him until he listens to a “thought letter” from his mother that the appraiser, Shindou Ayaka, decodes. Ayaka also gives Mirai 1000 yen for her rock. Mirai treats Akihito to dinner, but then announces they can no longer associate, because she killed someone in the past.

Ah, the episode which confirms that despite any concrete perverted or debauched behavior on the part of Akihito, he’s still going to be insulted and ridiculed on a regular basis by virtually every female in the show. Seriously, there was a point at which you gotta say “lay off the guy already!” Sure, it may only be affectionate ribbing, but a sizable chunk of the dialogue is given over to this kind of banter, and in addition to being a shade (no pun intended)…overweening. If you’re going to put a full court press of verbal abuse on the male lead, at least make him deserve it. As it is, Mitsuki and Mirai chide him for stuff he doesn’t even say or do. Of course, if the point of all of this is to make us sympathize with an otherwise smug Akihito, it succeeds to a degree – as does the revelation that he has a very bizarre mom.

This week he sees Mirai in full-on Spirit Hunter Mode (the battle is intense, but not quite on the same level as Chu2Koi when it was firing on all cylinders). He merely observes and doesn’t assist. We learn he’s made a deal with his weird senpai not to “stick his nose where it doesn’t belong” in exchange for being left alone. Having to sit on the sidelines while people may get hurt when you have the power to intervene doesn’t sound quite like the “fun life” Mirai says she can’t allow herself to have. We’re not going to pre-judge her situation, but in most cases like this (and having watched plenty of Railgun) isolating oneself from everyone else only makes one weaker. Then again, after killing someone, maybe Mirai doesn’t want to be stronger. 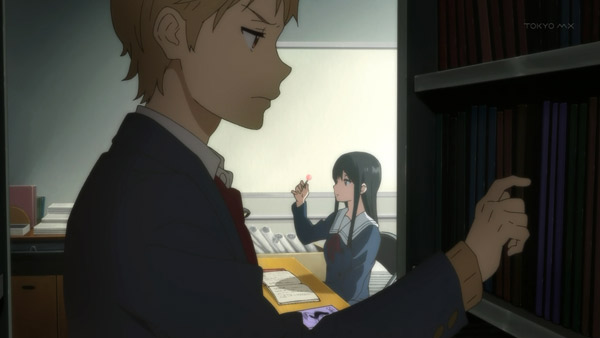 Kanbara Akihito is an immortal half-human, half-dreamshade and member of the literature club along with his friend Nase Mitsuki. He meets the spirit hunter Kuriyama Mirai, the last of her clan, who starts regularly stabbing him with her blood sword because she fears killing, even a nightshades. Mitsuki warns Akihito (on behalf of the Nase clan) to stay away from Mirai, but he refuses. Finally he learns her apartment is haunted by a nightshade. He accompanies her there, and they draw it out, beginning her first true battle as a spirit hunter.

This show was rich with detail and very beautifully made, as all KyoAni series tend to be, but thematic and aesthetic similarities to Haruhi, Hyouka, Chu2Koi, and Free! were everywhere. Akihito resembles Nagisa, while Mitsuki looks kinda like Chitanda but acts like Ibara (with the voice of Nagato). Mirai’s ditzy mischievousness reminded us of Rikka, only without the delusions. And like Haruhi, the world contains people with supernatural powers hiding in plain sight. So there’s a lot we found familiar, but all of it from solid shows we don’t regret watching. That could be true of this show too, if it sufficiently shuffles the elements.

We do like how the supernatural elements are actually real; Mirai isn’t forging a sword from her blood in her imagination, and she’s definitely got some slick moves when in combat. While she’d rather live a normal life, her “cursed” blood drags her towards the life of spirit hunting, and baddies are drawn to her power. She doesn’t fear them, but fears killing them, because rival clans will target her if she grows too powerful. Akihito is charmed by her interest in him – and by her ridiculous glasses – but getting involved with Mirai carries certain degree of risks, not the least of which being that it’ll piss off Mitsuki and the Nase clan. Looks like he’ll cross that boundary when he gets to it.