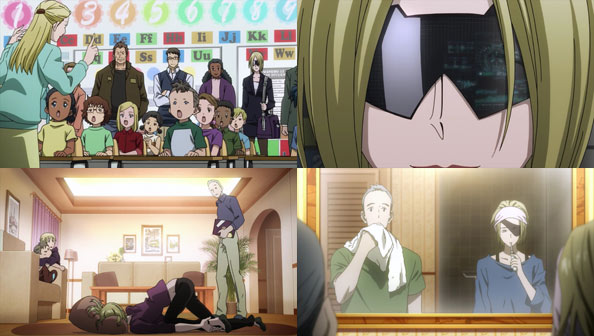 Just as getting shaken down in an alley one more time can lead to a city wide crisis involving a giant rage monster, Hellsalem’s Lot is the place where there’s never a shortage of work for cleaners like K.K. She’s so good at her job, in fact, that there’s no one to replace her in most operations. As such, her work-family life suffers.

This week we get a welcome, overdue look into that balance (or lack thereof), starting with how she managed not to break her promise to come to her younger son Kane’s school’s Parents Day the fourth or fifth time in a row.

I enjoyed how quickly we were caught up to speed on her lovely family: Kane, who still takes everything at face value (and assumes she doesn’t love him if she goes back  on her word), an older son who is jaded by it, kind husband who knows how to smooth things over on both sides.

Seeing the other side of K.K. really brought a background character to life, and gave all her momentary appearances in previous episodes this season more context: there’s always been somewhere she’d rather be, and that’s by her sons’ sides.

One advantage to all the work she’s been doing is that she can afford a remedy that will allow her to be with Kane: she has Patrick prepare a number of remote drones that she can control either from her shades in class or a laptop and controller in the restroom.

There are several interruptions in her presence (which a prickly Kane naturally notices), but hey, at least she’s there without having to worry about Steve and his men dying because of it. 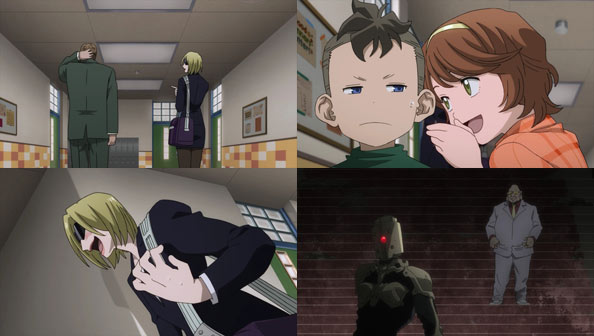 As soon as she returns to the class and finds only one man in a green suit having a grave phone conversation, I had some suspicions about him. But K.K. is trying to be present, and when she sees a pretty girl talking enthusiastically with her son, she can’t help but get a bit distracted.

That’s when the crime boss of the organization Steve is trying to take out shows off his backup: a remote-launched missile-catching Blood Breed who cannot be picked up on any of K.K.’s remote scopes. She held out as long as she could, but she has to go—and endure Kane’s hate—one more time. 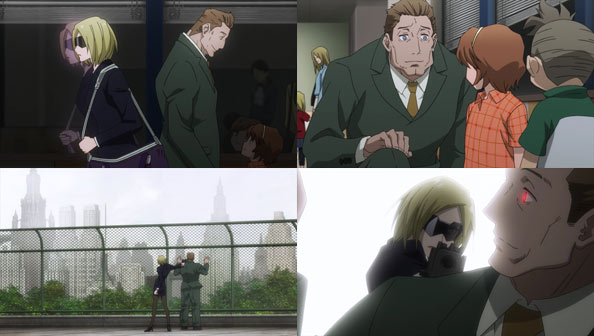 Of course, I’d already realized the man in the green suit was the real blood breed, remote-controlling the automaton facing off against Steve. It’s the reason he has to step out for a “smoke break.” K.K. senses it too, and confronts him on the school roof.

But here’s the thing: he wasn’t lying about anything: his daughter (Kane’s pretty  “girlfriend” Caroline) really does attend the school, he’s also up to his neck in work, and like K.K., has a hard time striking the right balance. 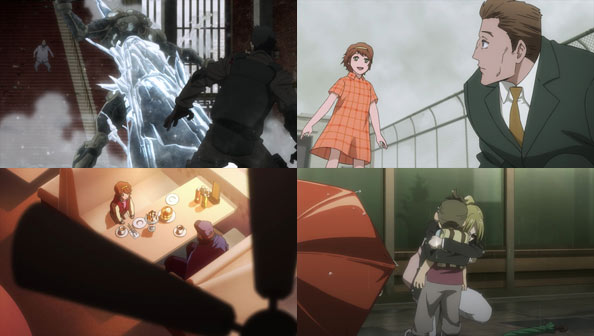 Knowing K.K. wouldn’t let him go he’s working as a bodyguard for some bad dudes, after all) he proposes the two of them go at it one-on-one right there. But anything that would have happened is thankfully interrupted by Caroline and Kane. Back at the operation, the father’s automaton stopped moving, allowing Steven to destroy it. The mission is a success, and K.K. can go back to being with her son.

Unfortunately, his failure means the father has to disappear lest he and his daughter incur the wrath of his defeated client for his failure. Just as K.K. has to disappoint her kids and let them hate her again and a gain, it’s more important for the dad to keep Caroline safe, so he had to pull her out of Kane’s school. K.K. feels partially responsible for that, so gives Kane a commiseratory hug. 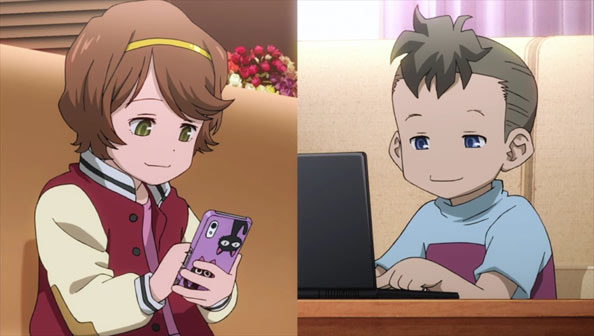 In any case, it’s not like Kane and Caroline will never see each other again; they’ll surely do so once they get a little older (and maybe even follow in their parents’ footsteps). Until then, there’s always the almighty social media to keep them connected!