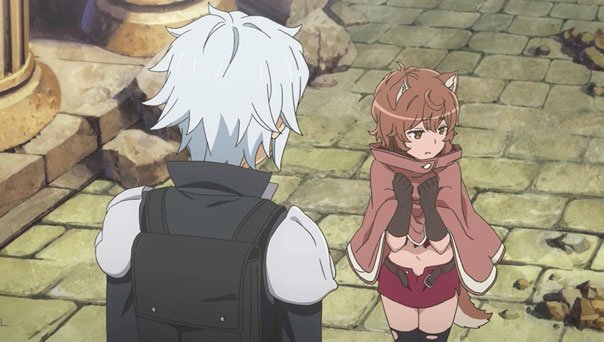 With her new animal transformation and unbuckled and Unbuttoned miniskirt, Lili is now officially Bell’s assistant, but she feels guilty about being forgiven so easily for all the crap she put Bell through. 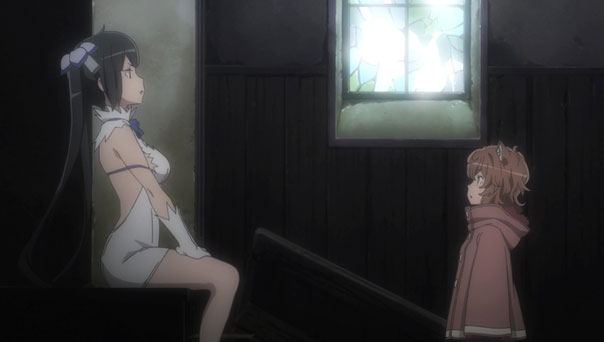 In order to officially officially be Bell’s supporter, however, she has to meet with Hestia and meet with her approval. Hessie believes Lili when she says she’ll never betray Bell again, but warns her to keep her grubby mitts off her man, making no bones about the fact that she sees Bell as a romantic target.

But being possessive only presents a challenge to Lili that she resolves to meet, the typical “I won’t lose to you” attitude. She later shows what a good team they make by providing long range support with a rapid-fire crossbow against some goblins and trolls. 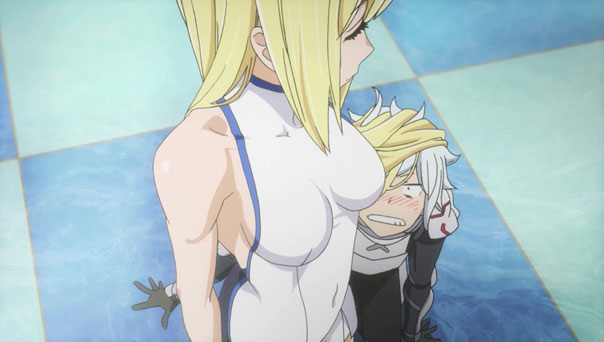 Both are at a disadvantage, because the girl Bell likes the most is Ais (or Aiz, depending on who’s subbing your anime). Only he’s deathly afraid of contact with her should he say or do the wrong thing and get rejected.

Up to this point he’s been able to believe he has a shot at her because he hasn’t had much contact with her. But she’s the one who initiates contact, and wants to apologize for causing him trouble. He in turn apologizes for making trouble for her. They’re like two peas in a pod, these two! 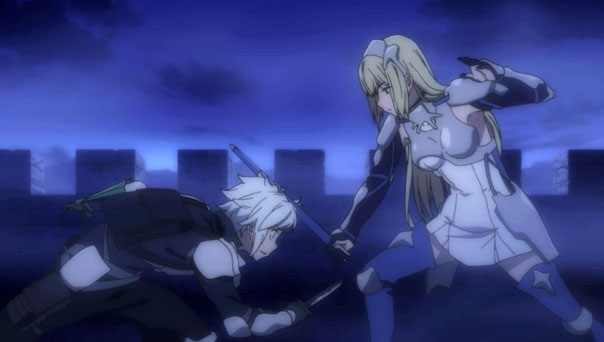 For now, though, Aiz agrees to train Bell, who is still not that confident in his fighting skills, despite the fact he’s gotten to the tenth floor. Every day, and some nights, Bell spars with Aiz, and gets beaten up by Aiz, who doesn’t go easy on him, and acknowledges his skills are lacking in her stoic  way.

I like how much dignity Aiz carries at all times; not letting Bell embarrass her as he embarrasses himself, not being able to resist trying to kiss her as she takes a catnap, before backing off. She also tells Bell that being a coward isn’t always bad thing: cowardice breeds survival, after all. It’s an extention of fear being necessary in any kind of combat or life-and-death situation. Those entirely without fear have a huge blind spot against opponents who have a healthy amount of it. 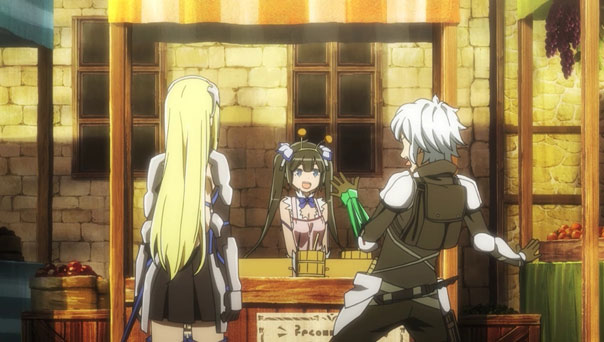 Naturally, when Hestia (working another part-time job to pay of Heph) spots Bell at the market with Aiz, she wigs out, making it as clear to Aiz as she did to Lili that Bell is hers, even if Bell doesn’t see her that way, and probably never will. Bell seems content in seeing Hestia as family; as sister—not a girlfriend or lover. 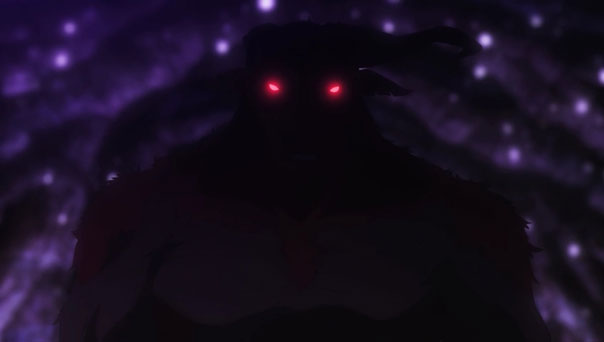 Interspersed with the Bell and Aiz training and the Hestia jealousy and territory-marking, we see a very large and powerful man beating an even larger minotaur into submission, and starts to train it to use a more powerful sword. His training of the minotaur mirrors Aiz’s training of Bell, and in both cases, the training pays off, with the minotaur being able to withstand a magical weapon attack from an adventurer.

It would seem muscular guy has recruited the minotaur as his supporter…or maybe he has darker plans. In any case, I can’t imagine these two won’t be crossing paths with Bell at some point. 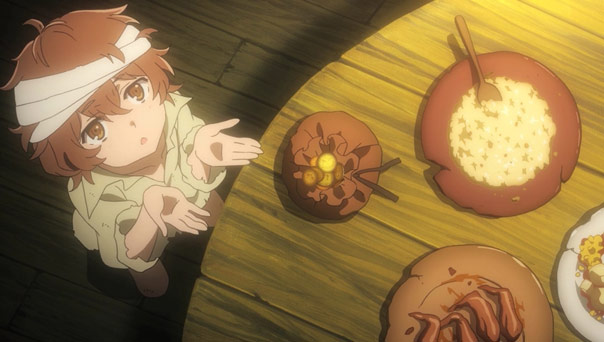 As her cold open makes almost too clear, Liliruca Arde is a well-traveled student of pain, suffering, helplessness and loneliness. Orphaned by her parents who were killed in the Dungeon, the Soma familia took her on as a supporter and proceeded to screw her over at every turn, treating her like garbage. The bad guys are so irredeemably, comically, Nobuyuki Sugou evil in their treatment of her, it leaves no room for nuance. 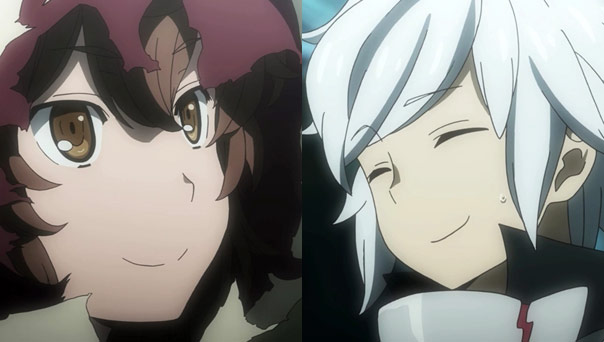 With her past, and present in mind, it makes sense that she wouldn’t trust Bell, and also would deceive him just as she was deceived. It worked for her tormenters, why not her? Besides, she hates adventurers…ALL adventurers. She’s just trying to do what she can to free herself from subjugation. She’s just going about this all the wrong way, and very nearly gets Bell and herself killed in the process. 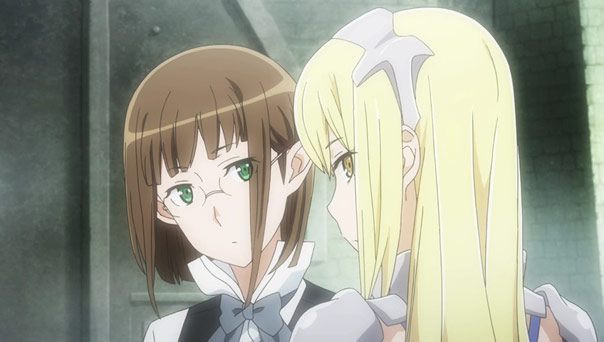 Hestia doesn’t trust Lili, nor does Eina, though they come to this opinion of her independently. As Bell heads into the dungeon to fight on the tenth floor in an obvious trap set up by Lili, both Eina and Ais overhear her Soma familia planning to take out a guy who matches Bell’s description, and Eina asks a favor of Ais. 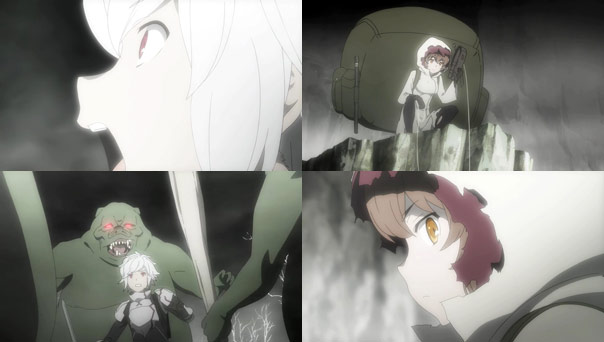 Setting up the naive Bell is child’s play for Lili, and when the time comes to reveal her true colors and re-steal his knife, she doesn’t hesitate, and actually shows off some pretty good skills…if only she focused her energies for good instead of selfish purposes. Mind you, with everything she’s been through I can’t really begrudge her doing what she thinks is best for herself, but we also happen to know this isn’t what’s best. 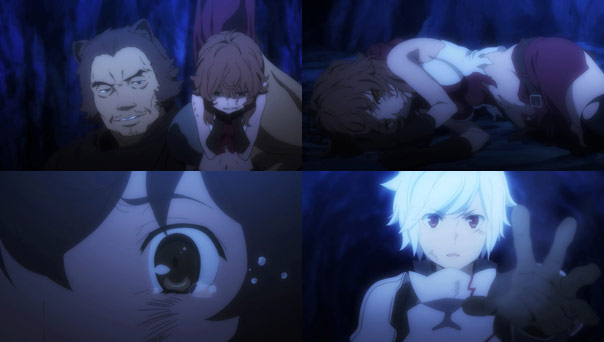 That becomes painfully clear when her ridiculously evil familia show up, ambushing her and taking everything she has, while getting some good stomps and punches in for good measure. The episode really lingers on this disturbing scene, but when a bruised and beaten Lili is left for dead, a decoy for a host of killer giant ants, Bell shows up with his Firebolt to take them all out, saving Lili once again. 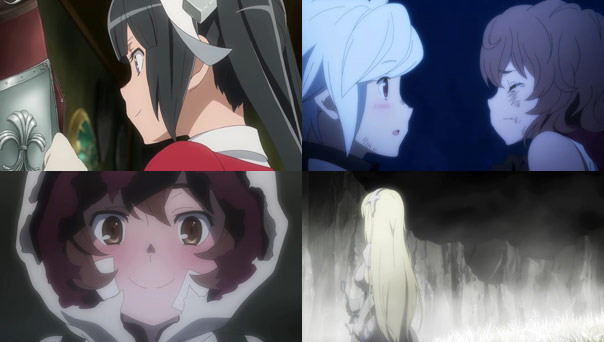 That resolution was a pleasant surprise. I expected Eina and Ais to corner Lili, rather than her fam, but instead Ais takes care of the orcs while obscured by the gloom, allowing Bell to rush to Lili’s aid. And why does he save her, as she asks, almost hysterical at the sight of his dopey, noble face? Because he felt like it.

He tells Hestia as much before he heads off to what he might have known could have been the trap it became. But he doesn’t care; he knows Lili’s kind, because he used to be the same before he met his goddess. And he’s not going to stand by and let her be destroyed or destroy herself. I especially like how Hestia defers to Bell here, and it pays off.

The villains were a bit over-the-top, but I’m glad Lili’s eyes are now open to the possibility not everyone in the world is awful.