Koguma has no family, no friends, no goals or hobbies, and not much in the way of money. She gets by living on her own in a near-monastic existence, and the first four minutes of this episode are spent in silence as the sun comes up and we witness each step of her morning routine from waking up to heading to school on her bike. If you love anime that portray real life without any embellishment, as I do, you’ll have already been pulled willingly into Koguma’s life, as I was.

But after watching the better part of one day in that quiet, lonely little life, we watch as she’s easily overtaken by a classmate on a motor scooter, and she decides to head to Shino’s motorcycle shop where she’s in luck: a used Honda Super Cub (the most-produced motorized vehicle in history) is available for just ¥10,000 (around $91). Immediately upon hopping on, the bike literally adds color to her life.

We watch the painstaking but also rather simple process of acquiring a license and tag for her bike as well as a helmet and gloves, as well as the always initially tricky starting protocol. But once all that’s squared away Koguma hits the road (calling to mind Yuru Camp’s Rin on her scooter), and regularly flashing a warm smile simply at the sight of her new Cub sitting in the paddock. It’s not exaggerating to say it saved her from what was a tedious, mundane, aimless existence.

Koguma realizes she’s still shaky on the road, so unable to sleep anyway, she gets up for a midnight ride to practice when the roads are all but deserted. Again, the Rin is strong in Koguma, right down to the occasional relieved sigh and assured yosh after a notable achievement. When she stops at a konbini and can’t get the Cub started, she simply consults the owner’s manual and switches to her reserve tank. 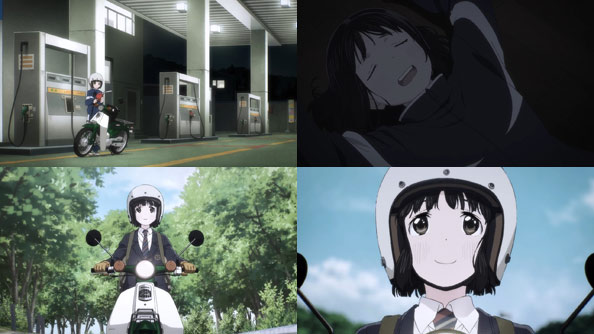 After refueling, Koguma heads home, plops down in her genkan relieved and exhausted, and falls asleep right there, waking up only when her alarm goes off. Already, her crushingly drab routine has been upended by her new mechanical companion. As she confidently rides to school, she starts to think of new adventures to go on with her new ride, like Kofu, well-known to all Yuru Campers. But the point is, she’s finally found an interest and has gained a measure of ambition.

I initially passed on Super Cub worried that it was going to be nothing but a glorified ad for the Honda Super Cub. I reconsidered when I saw it had a decent MAL score and glowing reviews on ANN, and noted that I was missing a iyashikei-style slice-of-life anime this season. So while it’s adding a sixth show to my schedule, it should feel far more like a treat than a chore.

Iroha has a new home with Yachiyo and Felicia in Kamihama and has transferred to the same school as Tsuruno, Kaede, and Rena, but still feels like something is “missing” from herself. This is probably due in part to all of the recent upheaval in her life—not to mention the normal isolation that comes from becoming a magical girl—but for now she’s determined to fill that void with the investigation and search for Ui, and hopefully Ui herself.

To proceed, she needs more rumors, so she goes to the rooftop and finds Rena, who along with Kaede hadn’t been answering texts, but didn’t receive any. What with the strange behavior of Iroha’s phone in the cold open, it’s a good bet something is up with peoples’ devices. Rena is still uncomfortable being friendly with…well, anyone, but appreciates Iroha reaching out enough to share two rumors: “the Invisible Girl” and “Endless Solitude.”

Like Rena, Felicia seems unaccustomed to the give-and-take of a conventional friendship, and even flashes a bit of tsundere when she reveals she got in trouble fighting high school girls who were talking shit about Iroha and Rena. Felicia accompanies Iroha to the Chuo radio tower where a third “Radio Wave Girl” rumor was started, and sure enough, they hear the voice of a girl. Only she’s not crying, she seems to be giggling; never a good sign.

As Iroha deals with the other girls in class talking about her, she continually receives odd texts on her phone she dismisses as spam, but eventually grow specific, and start to overlap with the rumors about Radio Wave Girl. That leads her back to the tower, where she encounters one of the twin sisters with the Wings of the Magius, who mentions the name “Sana Futaba” when Iroha mentions the texts, but isn’t about to let Iroha leave. 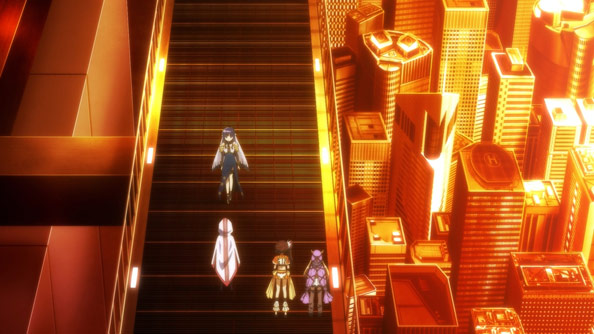 Reinforcing the overall feeling that many magical girls are often uncomfortable or awkward in friendships but still come to each others’ aid in a pinch, Iroha is backed up by Yachiyo (whom she texted earlier just in case), Tsuruno and Felicia.

The twin’s “pet” witch is dispatched by Yachiyo and the four magical girls regroup at a restaurant, where Iroha finally responds to the spam-that-is-more-than-spam. The mystery text-sender urges Iroha to come to the Endless Solitude. No doubt that’s where they’ll find this Futaba girl.

Five years have passed. Sukeroku and Miyokichi are long gone. They don’t even appear this week at all, and their absence is felt. I missed them, but whatever Kikuhiko feels about this, he’s soldiering on during these years.

He’s gained fame as a Shin’uchi, with the power to make total strangers leave their families and homes and burn bridges behind them just to get a shot at begging him for an apprenticeship, which he always refuses.

He feels he has nothing to teach apprentices. The successful formula he’s grasped and run with, he still scarcely knows what to make of it himself, let alone how to pass it on to others. It, being the rakugo business, is like a soap bubble; he daren’t disturb it.

However, Kiku cannot stop the march of time from taking its toll on his master Yakumo, who isn’t taking his wife’s death well. One could say she’s calling to him, and now that he has a reliable successor in Kiku, there’s little point in keeping her waiting any longer.

On his deathbed, Yakumo confesses to Kiku something new, but something that in hindsight makes sense: the “old man” who taught Sukeroku (and had that name before him) was a rival of Yakumo’s from his youth; someone he knew was the better talent, but used nepotism to snatch his father’s name from the interloper.

Obviously, Yakumo managed to become a great and revered storyteller, worthy of the name, but it’s clear, especially after taking in the young Sukeroku, that the possibility of blocking a greater talent than himself for the sake of his own pride, weighed on him greatly.

After tearlessly leading his father and master’s funeral ceremonies, Kiku gets back to work the next day. Taking the stage to new, gentler (and thus more suitable) entrance music, he eschews a sentimental story for one about an old man meeting a shinigami, who says magic words and shows him candles that represent lives, including his own, which eventually goes out.

The peformance ends with Kiku literally sprawling out on the stage as if he himself had died. And in a way, a part of him did die with his master: the part that was tied to others. When lying there soaking up applause, Kiku isn’t tearful or distraught, but relieved and elated by his new-found—and in his mind, hard-won—solitude. It’s a solitude he’ll use to hone his craft and become someone he believes worthy of being the Eighth Generation. 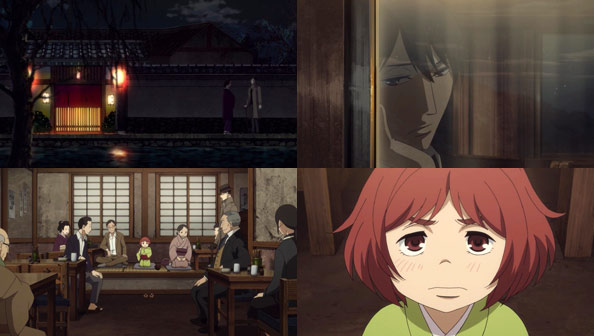 Before that, however, he wants to see Sukeroku. Not just to inform him of their father’s death, and recover the money Miyokichi stole, but to see how his brother doing. Kiku never had much faith Sukeroku could take care of himself, and didn’t think running off with a woman and raising a child would suddenly make him more capable of doing so.

So soon after achieving clarity through complete solitude—no master, no rival, no apprentice, no family—Kiku sets out to find old connections once more, no matter how briefly. In a town far from Tokyo, he asks an old man where rakugo is performed, and gets a predictable answer: strange for a young person such as himself to be asking about rakugo; there are far fewer such venues in town; television has taken over the hearts of most, making the world more boring.

Kiku probably agrees with all of that. But the old man also steers him in the direction of a soba restaurant, where he finds something…not boring at all: the entire crowd of diners is being entertained (and later squeezed for change) by a five-year-old girl with fiery red hair who is performing rakugo that Kiku immediately recognizes as Sukeroku’s. A little girl named Konatsu.

I loved Kiku’s little eye twitch upon their meeting. His late father believed young Sukeroku came to him as “karmic retribution” for maneuvering the older Sukeroku out of his father’s favor so many years ago.

Kiku may not know it yet, but Konatsu will end up being another kind of retribution: the kind that not only deprives him of the solitude he yearned for so dearly (not that being alone was what was best for him), but serves as a daily reminder of the brother he always believed was the greater talent. But I’m getting ahead of myself.